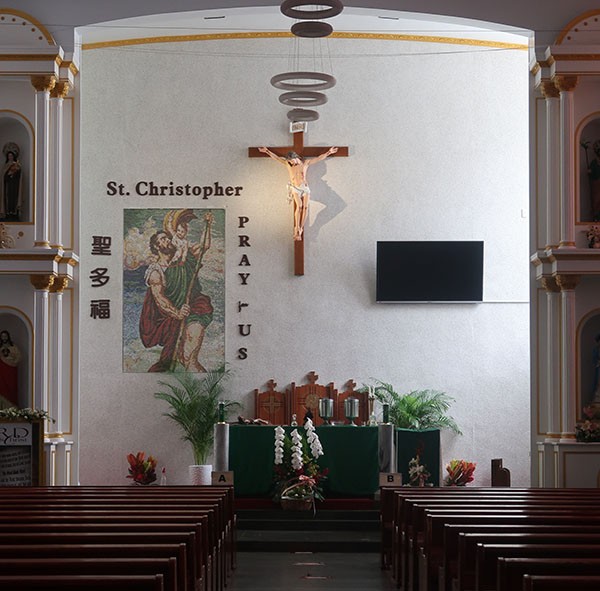 TAIPEI (Taiwan News) — A Taipei church popular among the foreign Catholic community is seeing smaller congregations since it adopted safety protocols to ward off the coronavirus, and nearby Filipino-run businesses are experiencing lower weekend footfall as a result.

A growing number of Filipino migrant workers began entering the country in later decades, and until the 1980s, St. Christopher Church was one of the only churches with English services. In 1997, A Filipino priest took over services, as most of the American parishioners had left the country, and Filipinos now comprise the majority of the congregation.

The church serves not only as a place of worship but also as a community center for migrant workers from the Philippines as well as some Vietnamese, Huang said. The members have established 15 groups, each one dedicated to a different kind of service, including social support, translation, and recreational activities.

On weekdays, church members sometimes gather to plan community activities. On Sundays, six Masses are held: three in English, two in Tagalog, and one in Vietnamese. Before the pandemic, each was typically attended by 2,500-3,000 worshippers.

The Philippines is experiencing a spike in coronavirus cases, with the number of infected topping 144,000. Most of Taiwan's imported cases in recent days have been people returning from the Philippines, forcing the Taiwanese government to update its regulations for the Southeast Asian country.

Starting Wednesday (Aug. 12) everyone arriving from the Philippines must undergo a 14-day period of quarantine at a government group quarantine facility. This has put the Filipino community in the spotlight.

Since the beginning of the outbreak, the Taiwanese government and public have been concerned about the possibility of infection clusters.

St. Christopher's drew particular attention due to the number of Filipino migrant workers, who enter and leave the country all year round. When the virus first emerged in Taiwan, there were even discussions about temporarily closing the church.

Huang told Taiwan News that “To avoid being complained [about] and banned by the government, we take the health precautions of the Taiwan government very seriously, even though all mass prayers [are] held normally.” Church regulations are not limited to social distancing; attendees must also wear a mask, have their hands sprayed with alcohol, and write down their personal data and emergency contacts before entering the prayer hall. Huang also explained: “After all attendees of one session leave the area, the chairs must all be disinfected before the people from the next session enter the area.” The church is also limiting the number of worshippers, so now only a total of 1,000-1,500 attend Mass on Sundays, not to mention that many migrant workers prohibited by their employers from going to church out of fear of community spread.

While the Taiwanese government has loosened its social distancing rule for large gatherings, the church is still being strict about requiring masks to be worn, disinfecting areas, and preventing crowds at community activities. St. Christopher's assures attendees that it is a safe place to pray, and foreigners from around the Taipei area are welcome to attend its English services.

Items are priced quite reasonably considering that most are imported. The supermarkets also offer various shipping services for customers to send things back home. Several restaurants, such as Wow Litson Manok and Cres-Art Philippine Cuisine, are located in the area as well, selling Inasal, Tosilog, Bangsilog, Porksilog and other specialties. Filipino food tends to have bold flavors and taste sour, sweet, and salty all at the same time. Chicken Inasal can be found in restaurants around Zhongshan District. (Taiwan News photo)