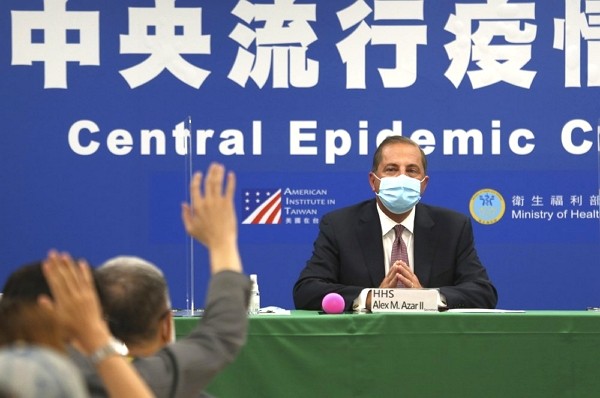 TAIPEI (Taiwan News) — Although the Japanese government has yet to make any official comment on U.S. Health Secretary Alex Azar's visit to Taiwan, a Japanese foreign ministry official said Monday (Aug. 10) that Tokyo will continue its support of Taiwan through all available means.

According to Sankei Shimbun, an official from the Japanese Ministry of Foreign Affairs speaking on the condition of anonymity pointed out that Tokyo must carefully evaluate the development of the U.S.-China tensions before making a move. The source added that the government's approach will also be shaped by the results of the U.S. presidential election in November.

The official said that while Japan does not have formal diplomatic relations with Taiwan, it regards it as a "very important partner" that shares universal values. The source also emphasized that the Japanese government is in favor of Taiwan's participation in the Trans-Pacific Strategic Economic Partnership Agreement (TPSEP) as well as the World Health Organization (WHO).

However, the foreign ministry official said Japan can only support Taiwan through already established means, stressing that the country is limited in its actions and that the U.S. can understand its dilemma, reported Liberty Times.

On Sunday (Aug. 9), Azar became the most high-profile American official to visit Taiwan in 41 years. International media has described his trip as a sign of Washington's strategic shift in its relationship with Taiwan and China.