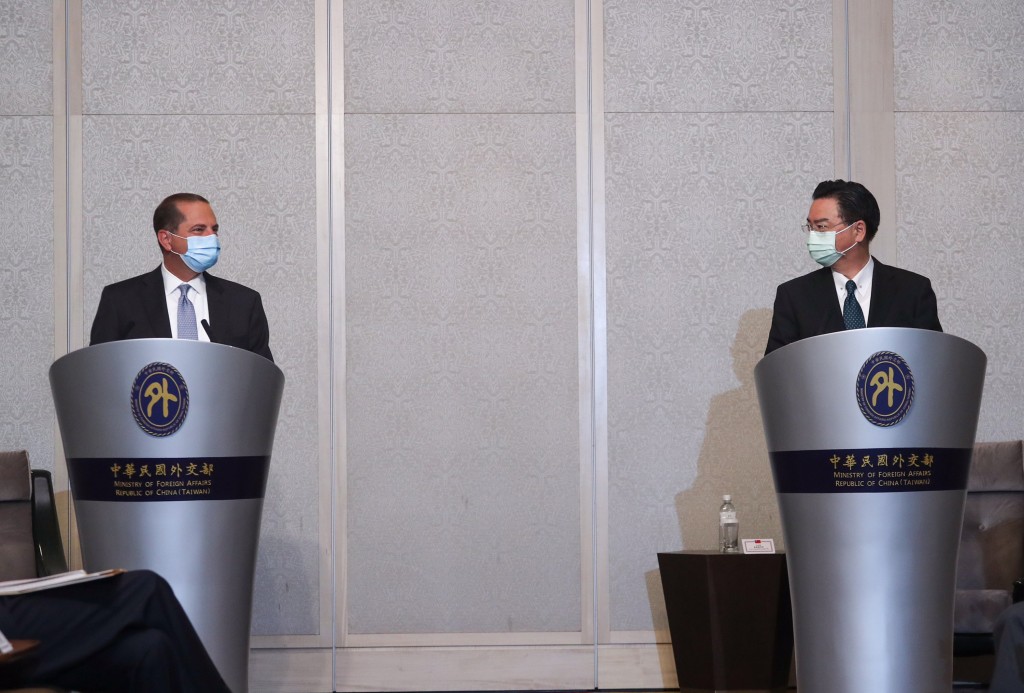 TAIPEI (Taiwan News) — Taiwan’s Foreign Minister Joseph Wu (吳釗燮) said on Tuesday (Aug. 11) that the country has donated over 50 million surgical masks to other countries amid the coronavirus (COVID-19) pandemic.

Taiwan has donated some 51 million masks to frontline medical workers worldwide, remarked Wu shortly before his meeting with U.S.Secretary of Health and Human Services Alex Azar. Of those, more than 10 million masks were sent to the U.S., along with other medical supplies, according to the minister.

“We even had to give these supplies quietly in some locations to free the recipients from trouble. Yes, trouble from Beijing,” stated Wu. The minister then moved on to criticize China for its persistent campaign to isolate Taiwan from the international community, and he called for support for the island nation: “Taiwan must win this battle so that democracy prevails.”

The closed-door meeting between Wu and Azar is focused on the theme of Taiwan-U.S. cooperation on pandemic prevention, according to Taiwan’s Ministry of Foreign Affairs (MOFA). Before the meeting, both made brief public remarks.

Speaking along the lines of his previous comments in Taiwan, Azar once again praised the country for its response to the coronavirus: “The United States believes that Taiwan’s accomplishments should be recognized on the world stage and that Taiwan should be able to share these lessons and its world-class expertise in international forums.”

The health secretary slammed the World Health Organization (WHO) for excluding Taiwan from the World Health Assembly — the WHO’s decision-making body — for the last four years. Taiwan was previously able to take part in the WHA as an observer for eight years, but since 2017 the country has been denied access due to China’s pressure on the international organization.

Azar also pointed out that the WHO had refused Taiwan’s donation of US$1 million to fight against the Ebola outbreak in the Democratic Republic of the Congo in 2018 because it did not recognize Taiwan’s status, calling it “political bullying” on the part of the health agency. “International organizations should not be places to play politics, especially on healthcare,” he said, adding that the U.S. will continue advocating Taiwanese contributions to the world’s health issues.

Azar is leading a delegation on a four-day trip to Taiwan as the coronavirus still rages in many parts of the world, including the Americas. He is the highest-level U.S. official to have visited Taiwan since the two countries cut diplomatic ties four decades ago, and the visit is in line with the 2018 Taiwan Travel Act, which encourages high-level official visits between Taiwan and the U.S.

Azar has made a number of high-profile visits over the past two days, including meeting with President Tsai Ing-wen (蔡英文) at the Presidential Office on Monday (Aug. 10). He also held a press conference with health minister Chen Shih-chung (陳時中), during which they vowed to expand health cooperation between the two countries.