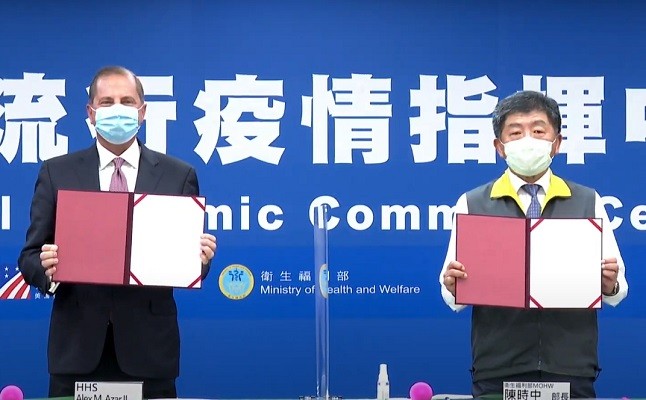 TAIPEI (Taiwan News) — U.S. Health and Human Services Secretary Alex Azar on Monday (Aug. 10) joined his Taiwanese counterpart, Health and Welfare Minister Chen Shih-chung (陳時中), in presiding over the signing of a memorandum of understanding (MOU) on the second day of his historic trip to Taiwan.

The signing ceremony took place on the second day of the American delegation's trip to Taiwan, the highest-level visit by any sitting U.S. official since the end of formal Taiwan-U.S. ties in 1979, and just hours after Azar had met with President Tsai Ing-wen (蔡英文). He joined Chen as a witness, while the MOU was inked by Brent Christensen, director of the American Institute in Taiwan (AIT), and Taiwan Council of U.S. Affairs (TCUSA) Chairperson Yang Jen-ni (楊珍妮).

Yang remarked that despite the devastating impact the coronavirus pandemic has had on the world, "We see Taiwan-U.S. relations continue to grow stronger." She cited previous agreements the two countries had signed on a range of issues and pointed out that Azar has been a strong proponent of Taiwan's participation at the World Health Assembly, which is the World Health Organization's annual forum where Taiwan had attended as an observer until 2017, when it was blocked due to Chinese pressure.

In his remarks, AIT Director Christenson said the presence of the highest-ranking American official to visit Taiwan in four decades made the signing ceremony an "especially historic event." He went on to say that the U.S. had shared information with Taiwan during the SARS outbreak of 2002-2004, which he said Taiwanese health authorities told him they considered to be invaluable in their efforts to stymie the current pandemic.

The AIT director pointed to the Global Cooperation and Training Framework (GCTF) as another mechanism showcasing U.S.-Taiwan joint efforts to advance global health and control the spread of diseases worldwide, with the most recent workshop in June having been centered on COVID-19. Christensen lauded what has become known as the "Taiwan Model," which he said is based on the "shared democratic values of transparency, inclusion, and rule of law," and he said it was a "proud moment in U.S.-Taiwan relations."

Yang and Christenson signed the MOU at 3:18 p.m. Azar and Chen then proceeded to sign duplicate copies of a letter pledging "to reaffirm cooperations across a host of challenges, including COVID-19."

During the post-signing press conference, Chen said he had first mentioned the idea of the MOU with Azar in May and that he was glad that the event had materialized with the health secretary in attendance. He thanked Azar for his support for Taiwan's participation in the WHA and for his insistence that the WHO "not exclude Taiwan to send a political message."

Azar called the visit "a wonderful opportunity to learn about Taiwan's world-class response to the COVID-19 pandemic." Joking that Chen, like himself, had become used to attending more than his share of press conferences of late, he stated that the U.S. Department of Health and Human Services and Taiwan's Ministry of Health and Welfare had for over 20 years forged a relationship based on "robust and wide-ranging" cooperation ranging from SARS, "cancer research, vaccine research, and regional information-sharing efforts."

Azar said he had enjoyed meeting with Chen on the sidelines of previous WHAs, emphasized the U.S.'s support for observer status for Taiwan, and said the countries' collaboration during the SARS outbreak had "primed" them for the current crisis gripping the world. He congratulated Chen, the minister's team, and the Taiwanese people on their successes on the "Taiwan Model," which he attributed to scientific best practices paired with Taiwan's openness as a society. 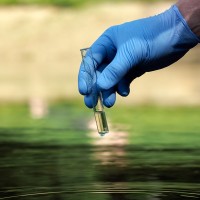 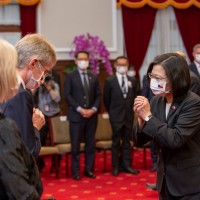 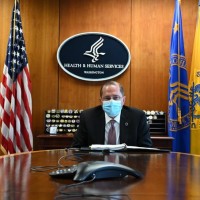 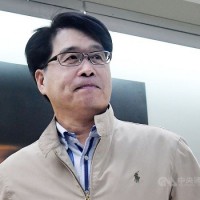