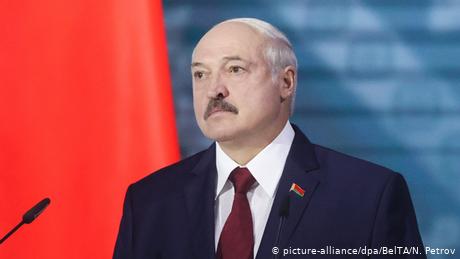 Belarusian leader Alexander Lukashenko won a sixth term as president with 80% of the vote, according to preliminary results cited by the Central Election Commission Monday.

Svetlana Tikhanouskaya, a 37-year-old former English teacher who emerged as Lukashenko's chief opponent, won 9.9% of the vote, the election commission said. The other three candidates received less than 2% of the vote, while turnout for the election was put at 84%.

Mass protests erupted in cities across the country, including the capital Minsk, after official exit polls showed Lukashenko was on course for reelection. The president's opponents have claimed that the election result was rigged in his favor.

Some 5,000 protesters in Minsk took to the streets to protest Lukashenko's election win, clashing with police into the early hours of Monday morning. Officers used stun and flash grenades to break up the demonstrations, according to DW's Minsk correspondent Irina Schöll.

At least one person has been killed and dozens injured in the clashes between police and protesters, while 120 people have been detained nationwide, according to the Viasna human rights group.

In response to initial exit polls on Sunday, Tikhanouskaya said she did not trust the official figures, insisting "the majority is with us."

Manuel Sarrazin, a member of German parliament's foreign affairs committee, told DW that it's clear that the election was "fake."

"It's quite obvious that, for the past 25 years, we haven't seen free and fair elections in Belarus at all," Sarrazin said. "But I think no election has been as fake as this one."

This year's presidential election did not have any independent election observers present as the Organization for Security and Cooperation in Europe (OSCE), which observes elections on the continent, was not invited.

Lukashenko has been in office since Belarus established the role in 1994 — three years after declaring independence from the Soviet Union. He's the longest-serving president in Europe, and EU media have referred to him as "Europe's last dictator."

The longtime president has often advocated for closer ties with Russia, which has reflected in his largely successful economic policies. But there have been several disputes with Russia over energy shipments in recent years, and Lukashenko has accused Moscow of interfering with elections, including the one on Sunday.

Opposition parties have fought for years to unseat Lukashenko, and couldn't agree on a candidate to support in this year's election. But a recent rise in anti-government protests opened the possibility for the end of the Belarusian strongman's reign.

Tikhanouskaya emerged as the top candidates to upset Lukashenko, with her rallies drawing tens of thousands. She decided to run after her husband, imprisoned blogger and activist Sergei Tikhanovsky, was barred from doing so.