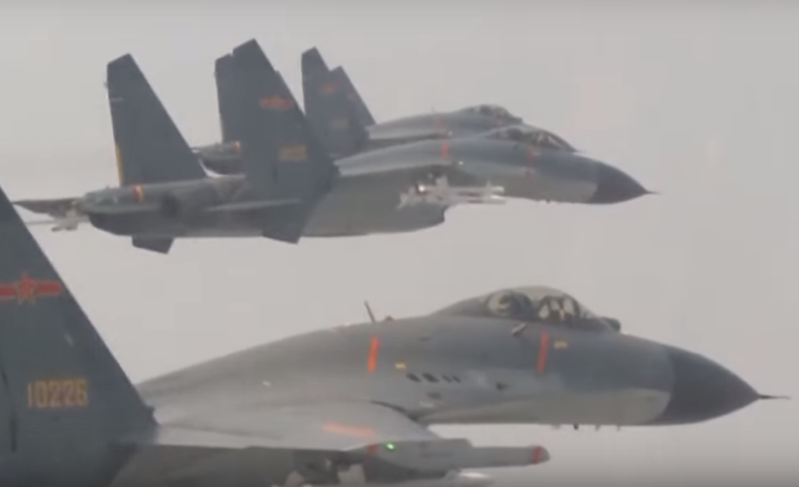 TAIPEI (Taiwan News) — Chinese fighter jets crossed over the median line of the Taiwan Strait and into the country's airspace on Monday morning (Aug. 10), one day after U.S. Health and Human Services (HHS) Secretary Alex Azar landed in Taiwan.

At 4:48 p.m. on Sunday (Aug. 9), Azar and the delegation, which was aboard a U.S. Air Force C-40B aircraft, touched down at Taipei's Songshan Airport. Azar's trip to Taiwan marks the first by an American HHS head and the first by a U.S. Cabinet-level official since 2014.

The Ministry of National Defense's Air Force Command Headquarters on Monday announced that Shenyang J-11 and Chengdu J-10 fighter jets belonging to the (PLAAF) crossed the median line of the Taiwan Strait, the unofficial airspace boundary between the two countries, for a brief period at 9 a.m. on Monday morning. After the PLAAF fighters ignored a verbal warning, Taiwanese aircraft swiftly intercepted the warplanes and drove them away from Taiwan's airspace.

When news broke on Aug. 5 that Azar was planning to visit Taiwan, Chinese Foreign Ministry spokesman Wang Wenbin (汪文斌) told the media that Beijing had lodged “solemn complaints" with Washington over the visit and claimed that Taiwan is “the most important and sensitive issue in China-U.S. relations.” He then called on the U.S. to end all forms of official contact with Taiwan in order to “avoid serious damage to China-U.S. relations and peace and stability across the Taiwan Strait."

Azar's trip to Taiwan is the highest-level visit by a U.S. official since Washington severed diplomatic relations with Taipei in 1979. The health secretary's trip has been facilitated by the Taiwan Travel Act, which was passed in 2018 and calls for reciprocal visits by officials of both countries "at all levels."