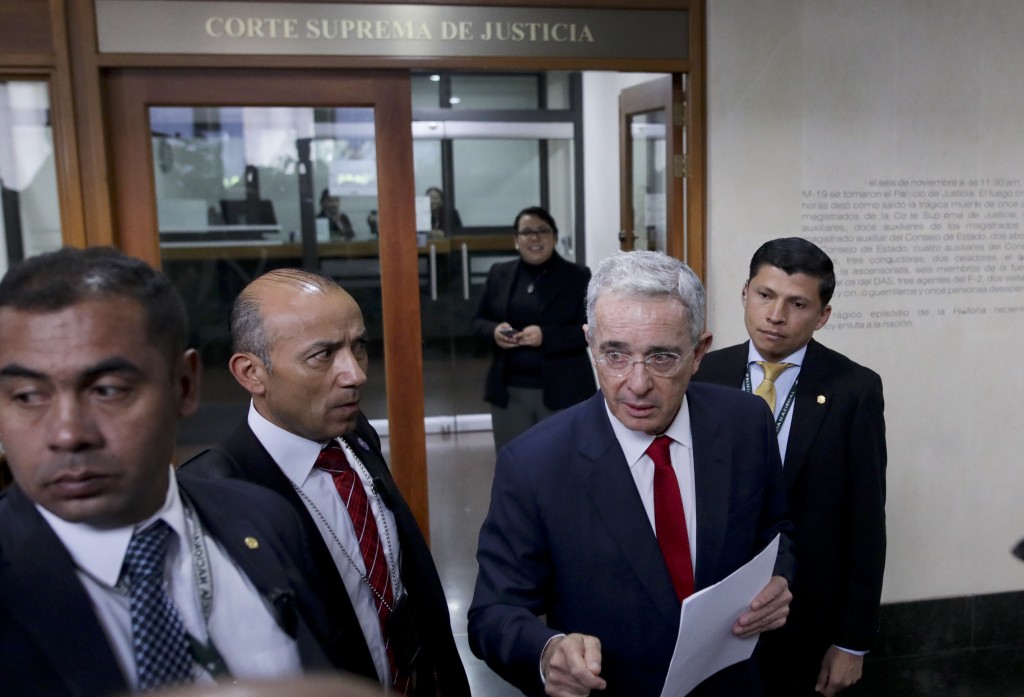 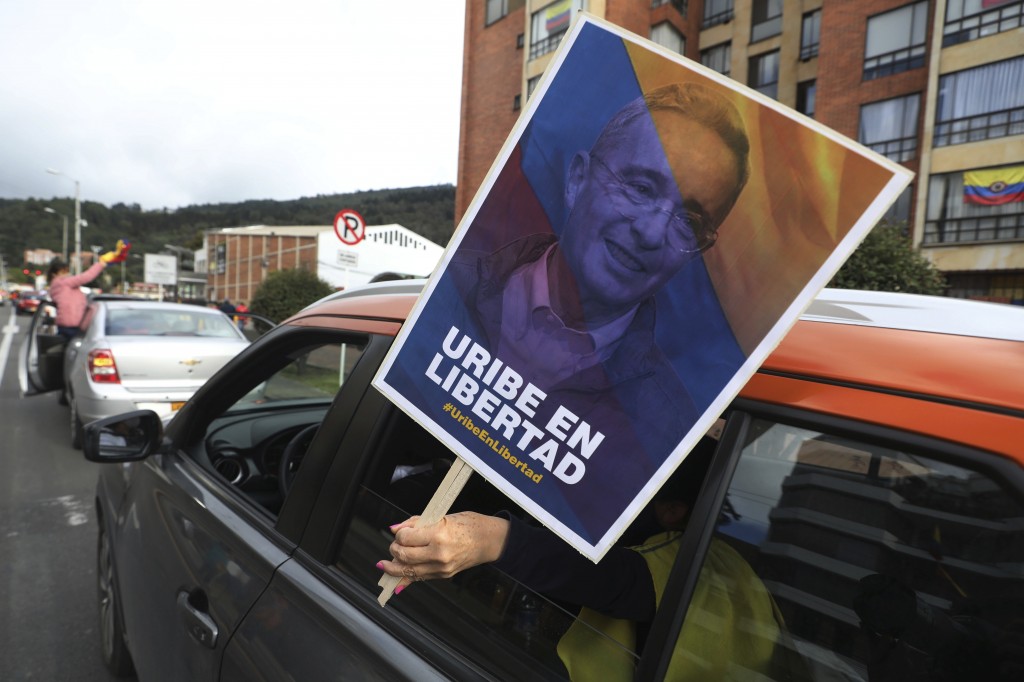 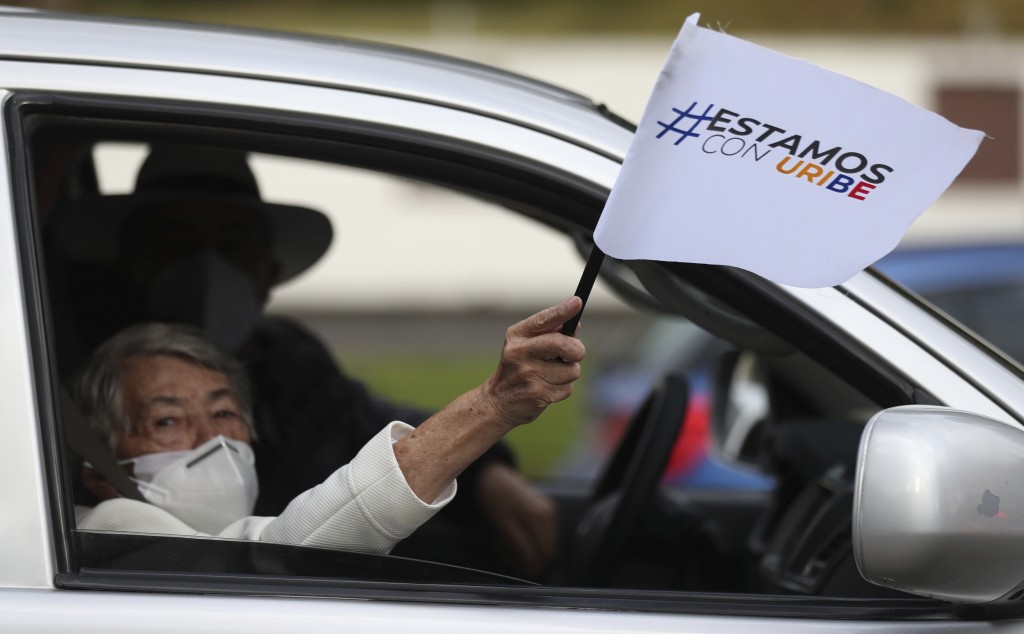 BOGOTA, Colombia (AP) — The frantic voice message to an inmate in Colombia’s notorious La Picota prison came days before powerful former President Álvaro Uribe was up against a court deadline to submit witness testimony in a potentially damaging case against him.

In a series of WhatsApp audios, López explained that Uribe’s political allies wanted him to help their cause by submitting a video in which he backtracks from previous statements alleging the politician had ties to right-wing paramilitaries.

The Supreme Court had just opened an investigation into allegations that Uribe had engaged in witness tampering and his supporters were eager to get it closed. If Monsalve could testify that he'd been pressured by an opposition lawmaker into making false assertions against Uribe, he could help spare one of Colombia's most popular if polemical leaders a possibly ruinous legal headache.

The audios are among a trove of legally intercepted calls, covert recordings and witness testimony that make up the backbone of a monumental Supreme Court investigation into Uribe, whose house arrest order last week rocked the political establishment and divided the nation. The transcript is documented in the classified 1,554-page decision obtained by The Associated Press.

In the audios, López didn’t name Uribe, referring to him only as “the ex” and “the old man."

Uribe has not been charged and strongly denies the accusations against him.

The documents nonetheless show a harried search for witnesses by lawyers who were repeatedly pushed by Uribe to gather favorable testimony. Phone records confirm he was frequently in contact before and after meetings to try and collect critical pieces of evidence. In one case, the politician urged an ally to help pressure an ex-paramilitary's family in convincing him to meet with his lawyer.

“I want that criminal to straighten this out," he said in an intercepted call.

The account contrasts with that provided in court by Uribe's defense, which claims the president had little involvement in building the case. He appears to give tacit approval of questionable acts, like submitting confessions that had been written by a lawyer, Diego Cadena, and signed by inmates who reportedly had bad penmanship.

“These people don’t even have an elementary education,” Cadena told Uribe by phone. “I’m a criminal lawyer, I’ve handled these things.”

However, there also appears to be no direct instruction by Uribe to his lawyers or emissaries telling witnesses to specifically lie or offer benefits beyond legal advice. On several occasions, he tells his confidantes that he is simply searching for “the truth.”

“The obsession of President Álvaro Uribe Vélez has been for the truth,” said Jaime Granados, Uribe’s lawyer. “The obsession of others, for years, has been to find him guilty, no matter what the events actually show.”

The case has renewed a long-simmering divide in Colombia over the nation’s half-century conflict between the state, leftist rebels and paramilitary groups. Many Colombians still scarred by a time when kidnappings and bombings were frequent have been reluctant to embrace the historic 2016 accord that grants former guerrillas 10 seats in congress and little to no jail time in exchange for telling the truth.

Uribe has been at the center of the divide, pushing campaigns to reject or weaken the accord and remaining an influential figure despite having left the presidency a decade ago. His legion of followers has grown smaller, but many still regard him as a savior who helped turn the tide against rebels with a U.S.-backed military approach.

News of the Supreme Court’s house arrest decision thus struck a deep chord both for Uribe admirers who consider the ruling unjust and detractors who saw it as an encouraging sign that even the powerful can be held accountable in Colombia.

President Iván Duque – a protégé of Uribe – has expressed his unfailing belief in his mentor's innocence.

“The court is not judging the presidential record of Uribe,” said José Miguel Vivanco, Americas director for Human Rights Watch. “The court is examining a very serious case of witness tampering that implicated the former president with organized crime – and the debate should be constrained exclusively to that point.”

The origins of the case can be traced back to 2012, when Sen. Iván Cepeda made allegations in congress regarding Uribe’s ties to paramilitaries. Such groups were organized by landowners, sometimes with state complicity, to fight leftist guerrillas.

Throughout his career, Uribe has been dogged by allegations of links to drug cartels and paramilitaries, though he has never been charged and decries the accusations. He filed a complaint against Cepeda, accusing him of manipulating witnesses to extract the damaging confessions by ex-paramilitaries. But in 2018, the Supreme Court dropped the case and instead began investigating the former president.

The court record paints a vivid picture of those initial days following the ruling.

After López’s call to Monsalve, Uribe’s lawyer showed up at the prison. The 40-year-old inmate refused to accept his visit. But the next day, after apparent pressure by another inmate, Monsalve conceded to meeting him.

He walked into the meeting wearing a new watch his wife had delivered to him that day and covertly recorded 18 minutes of the encounter.

“I think you need some type of benefit,” Cadena is logged as stating.

But Monsalve is reticent: Changing his testimony would get him charged with a new crime, resulting in more jail time, he notes. Enrique Pardo Hasche, a fellow inmate who acted as a go-between with Uribe allies, tries to diminish his fears.

“If you go to the side of the president, I assure you, you’ll get help,” Hasche says.

Cadena, Uribe’s lawyer, says he “doesn’t want to put even the least amount of pressure” but later states that he has to submit the declaration the next day. He suggests Monsalve write something short, saying he is willing to “clear up the events.”

Nonetheless, Cadena proceeded in his efforts to obtain a retraction, meeting about a week later with Monsalve’s wife, according to the document.

Deyanira Gómez showed up for the encounter at a Dunkin Donuts in early April equipped with a secret recording device and a frank message to Cadena.

Gómez did submit a letter to the court from her husband, apologizing to Uribe and his brother and saying they are “totally innocent.” But at the end, he writes: “I am doing this letter under pressure” from both Cadena and Hasche, “sent by ex-President Álvaro Uribe.”

Repeatedly, Uribe says in phone calls that he is only insisting on finding “the truth” and makes statements like “let it be clear, there is nothing shady here.” But magistrates are skeptical of such statements, noting the ex-chief of state acknowledged knowing several times that his calls are wiretapped, and suggesting the content could be less than authentic as a result.

Granados, who is representing Uribe, is calling for the entire court record to be released, stating the anecdotes contained in the ruling present a partial picture.

Throughout it all, Uribe was surrounded by a fervent cast of allies willing to do whatever necessary - even to their own detriment. One inmate aligned with the politician comments that “Uribe is God.” López, who made the WhatsApp audios, similarly expresses an undying devotion to him, crediting him with defeating the guerrillas who resulted in his own displacement.

“As long as Doctor Uribe exists, I’ll be a follower," he says.