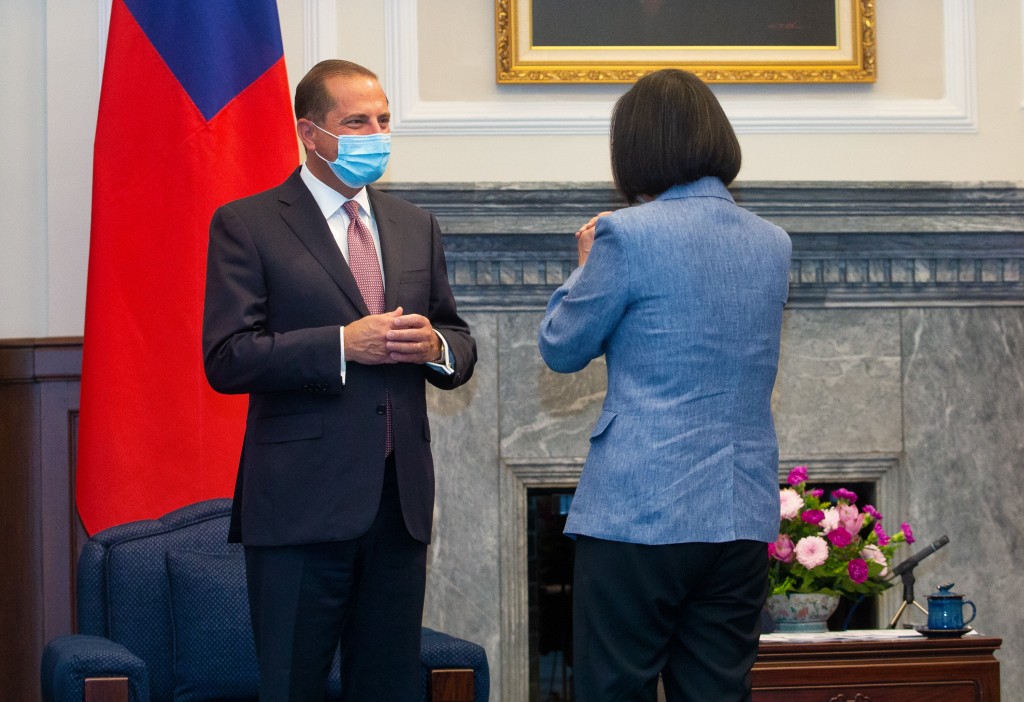 TAIPEI (Taiwan News) — Upon meeting with the U.S. Secretary of Health and Human Services Alex Azar, the highest-level Cabinet member to have visited Taiwan for over four decades, President Tsai Ing-wen (蔡英文) pledged to advance ties with the U.S. in health and other areas.

“The visit provides us with opportunities to speak face to face on issues of importance to both sides and find a direction for future cooperation,” remarked Tsai at the Presidential Office on Monday morning (Aug. 10). The two countries have strengthened collaborations on developing vaccines and drugs for the past few months, said Tsai, who went on to say that the nation is determined to continue the collaboration on health to benefit the people of both countries and the entire world.

“The particular focus of both my discussions with President Tsai and of our trip is highlighting Taiwan’s success in combatting the Covid-19 and cooperating with the U.S. to prevent, detect, and respond to health threats,” said Azar, who arrived in Taipei with a delegation on Sunday evening.

“It is a true honor to be here to convey a message of strong support and friendship from President Trump to Taiwan," said the health secretary. He praised Taiwan’s approach to containing the coronavirus (COVID-19) outbreak as being among the most successful in the world, attributing the nation’s success to its “open, transparent, and democratic” society and culture.

Azar and the U.S. delegation are expected to meet with his Taiwanese counterparts, including Health Minister Chen Shih-chung (陳時中), and other members of the Taiwanese government in the following days. In particular, he will witness the signing of a memorandum of understanding (MOU) between Taiwan and the U.S. about cooperation on health on Monday afternoon.

During her remarks, Tsai also said it is “highly regrettable” that the World Health Assembly — the World Health Organization’s decision-making body — continues to exclude Taiwan’s participation due to Chinese pressure. “I would like to reiterate that political consideration should never take precedence over the right to health,” said Tsai, adding that the decision to bar Taiwan from taking part in the WHA “is a violation of the universal right to health.”

In addition, Azar congratulated Tsai on her second term, which began in May. He also offered condolences on the passing of former Taiwan President Lee Teng-hui (李登輝), describing him as “the father of Taiwan’s democracy” and one of the leading figures in the democratic movement of the 20th century.

The opposition Kuomintang (KMT), however, later issued a protest against Azar, contending that the U.S. health secretary began with his remarks by calling Tsai “President Xi.” The KMT urged the Presidential Office to file a protest to the U.S. to “clarify that the president of the Republic of China is surnamed Tsai, rather than Xi,” the party said via a statement.

Based on the livestream video of the remarks, it sounds more like a slip of the tongue by Azar, who referred to “President Tsai” as “presidency” on the first occasion but corrected himself afterward. According to the transcript provided by the American Institute in Taiwan [AIT] after the meeting, the line as written read, “President Tsai [ts-eye].”