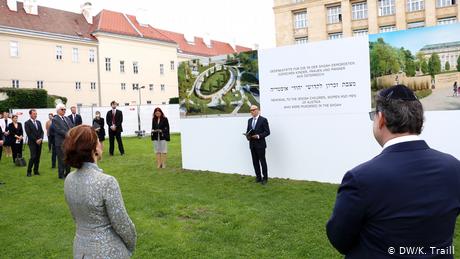 For 90-year old Holocaust survivor Kurt Yakov Tutter, it's the realization of a decades-long dream. Born in Vienna in 1930, Tutter and his sister were hidden away while their parents were sent to their deaths in the Nazi's extermination camps. He later immigrated to Canada, yet the grief of losing his parents never faded.

For the past 20 years Tutter has been fighting to get approval and funding for a memorial in his birth city where his parents' names could be immortalized in stone. It was not until 2018 — the 80th anniversary of the annexation — that the Austrian government finally gave his proposed wall the go-ahead.

The new memorial wall will be located in Ostarrichi Park (pictured above), in front of the Austrian National Bank in Vienna's ninth district. It will take the form of a huge oval, to be engraved with the names of 64, 259 Austrian Jewish children, women and men who perished in death camps between 1938 and 1945.

Reflecting on its dark past

Austria has long faced criticism that it failed to adequately address its Nazi past, in particular over atrocities committed against its Jewish population.

Oskar Deutsch, president of the Jewish Community in Vienna, told attendees at a ceremony to mark the beginning of the wall's construction that "the name wall will be for the progeny, but also for all Austrians — a place of remembering and a place for reflection on the events of the past and the developments in the present."

A memorial room in the Vienna city synagogue — where the names of more than 62,000 Austrian Jews are engraved in slate — was opened 18 years ago. But until now, there has been no public memorial to these individuals' fates.

Constitutional Affairs Minister Karoline Edtstadler assured members of Vienna's Jewish community that the wall would ensure Austrians did not forget their history.

Read more: 70 years of the Central Council of Jews in Germany, 'a meaningful voice that is needed'

"As Austrians we have a particular historical responsibility when we look back at the darkest chapter in our history," she said. "In the future, we will be measured by the fact that the murder of millions of people will not remain an abstract number, but rather living in our memories."

Giving them a name

Dr. Gerhard Ungar from the Documentation Center of the Austrian Resistance has dedicated the past 31 years to collecting the names of the victims. He describes searching for lists in the US, Russia and all over Europe, only to find most were in Vienna, in the basement of the Ministry of Finance.

Copies of these gruesome documents are headed with titles such as "Transport Number 40, September 10, 1942, to Theresienstadt." Each page lists the names, places of residence, dates of birth and individual numbers given to those deported to their deaths. Around 40,000 names were contained in the Finance Ministry lists. More than 20,000 other Jews had attempted to flee Austria and were captured and sent to camps from other countries, including France and Belgium.

A memorial monument to the Austrian victims of the Shoah — without names — was erected in Vienna's Judenplatz in 2000. But Ungar says this did not satisfy the victim's relatives' needs for individual acknowledgement.

"I talked to many of the survivors and people who had lost their brothers and sisters," says Ungar. "And most of them I talked to, they wanted the names. They wanted a kind of a tombstone for people who don't have a grave. People didn't like that abstract kind of monument that's just modern art."

For many years, Ungar thought Tutter's name wall was an impossible dream. But he'd promised him that if he "managed to get his monument, then he would give him the names."

'Austrians were better Nazis than the Germans'

Some Austrian Jews did manage to escape, eventually building new lives in far away lands.

Andreas Altman, a Viennese Jew from a wealthy family, fled in March 1938 as the Nazis marched into Austria. He arrived in Australia 10 months later, at the age of 36.

His daughter Vivien was born in Melbourne. While her father, his brother and sister and her grandmother all "got out in time," relatives in her larger family who stayed behind were arrested and murdered in the camps.

Vivien is both pleased and cautious to hear about the new memorial. "For me, it's a good thing, but too little too late," she says. "It's been 75 years since the war ended and I'd really love to ask the question, 'Why has it taken so long?'"

Her father never forgave Austria for its treatment of the Jews. He told her very little about his experiences, but she knew he would never have gone back to live in Vienna. "He always said the Austrians were better Nazis than the Germans and I think he just felt incredibly betrayed, traumatized, shocked," she says.

In the 1960s Andreas took Vivien, then aged 11, to visit her grandmother and aunt who had returned to Vienna after the war. She recalls her father was "extremely anxious" and that soon after they arrived, he suffered a major heart attack. Vivien is certain that "going back to Vienna and reviving some of those memories contributed."

Vivien and her brother applied to the Austrian government for restitution in the 2000s. Each received the equivalent of around €2,500 ($2,950).

"It was made pretty clear that it was a symbolic gesture and in that sense those symbolic actions are important because the Austrian government recognized that they had a role — they weren't just victims, they had an active role in the persecution of Jews. So it was very significant in that sense," says Vivien.

Gerhard Ungar from the Documentation Center says there were "certainly people in politics who said, 'Well, there is a monument on Judenplatz, so why should we build a second one?' Kurt Tutter didn't accept that. It took him 20 years, but finally he succeeded in convincing the government to do something."

Ungar retired last year, but he is quietly pleased that his life's work will now live on in stone. "I promised Kurt 20 years ago that I would give him the names. Finally it's the result of almost 30 years of work. It's satisfying."