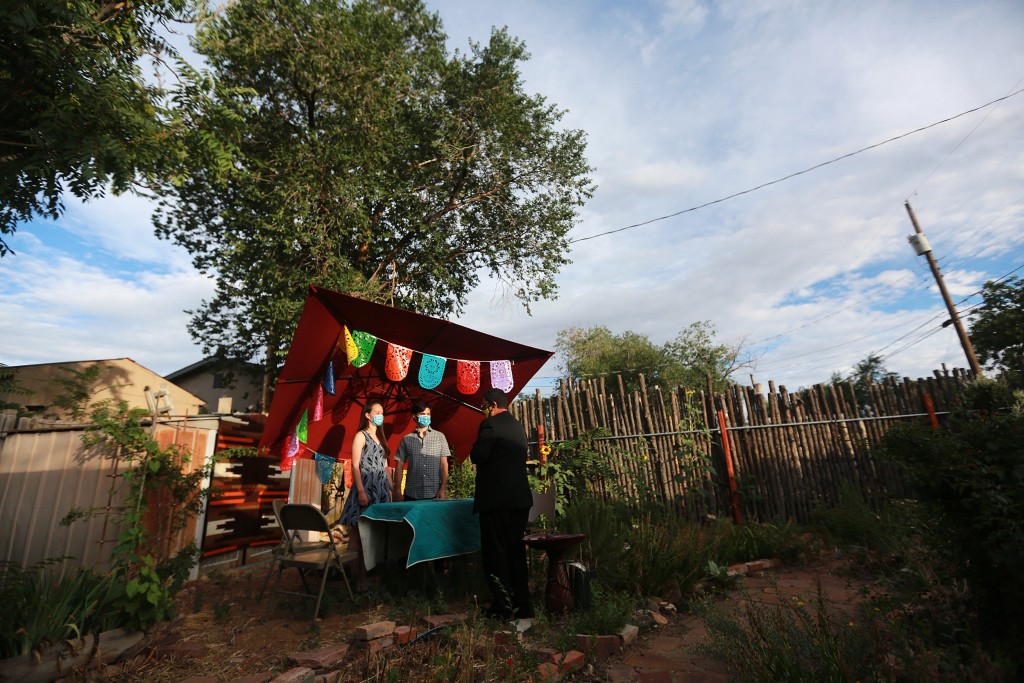 SANTA FE, N.M. (AP) — The plan was to elope in April in New York City, where my fiancee, Julie Trolle, lived.

When the coronavirus hit, I canceled my flight from El Paso, where I was covering immigration. Julie, a doctoral candidate in biology at New York University, walked to her lab each day passing rows of refrigerator trucks.

We are fortunate. We don’t have underlying health conditions. Our jobs are secure and allow remote work. But as countries closed borders, we feared increasingly that we could be separated.

Julie is Danish. I am American.

On March 14, Denmark closed its borders to foreigners, including boyfriends like me. In July, the White House threatened to expel certain student visa-holders from the United States. Headlines from both continents made us check fine print to see if we’d be prevented from living in the same country.

The global shutdown followed a century-long expansion of travel and intercultural exchange that had shaped our families’ lives.

Julie was born in Hong Kong, where her Chinese mother and Danish father lived until she was 7. She mostly grew up in Denmark, and left as a teenager to go to boarding school in New Mexico.

My Italian grandfather, a widower, met his second wife “online” in the 1960s. They were both Spanish-speaking phone operators; Giuseppe connected calls in Rome, Ruth in Manhattan. By 1967, my 12-year-old father was brought over and started to learn English and stickball.

In 2016, globalization also brought Julie and me together, also in Manhattan.

We met in a bar at an alumni happy hour. She attended the United World College of the American West, in my hometown of Las Vegas, New Mexico. I went to another branch of the same school — in Hong Kong.

New York City brought us together, but it couldn’t marry us. In May, after the pandemic hit, I scheduled another trip, heartened by the announcement of “Project Cupid,” in which the city promised to marry couples remotely via video chat. But “launch” was just an appointment signup, and the appointments went fast. I didn’t hear back until a few weeks later when a kind, overwhelmed clerk called to apologize. I was already back in El Paso.

Last month, we tried again — this time in New Mexico, where I had been assigned to cover education and where my family lives.

I rented a Mustang convertible and picked Julie up at the airport. Driving through the pine forests of the high desert we heard about the “love is essential” movement.

As we were sorting out our own marriage that would ensure Julie could stay in the U.S., and I would be able to enter Denmark, couples around the world were successfully lobbying for essential status. Denmark had carved out an exception for foreign partners, even the unmarried. A few days after Julie landed, the Trump administration abandoned its proposal to revoke visas for students who weren’t attending in-person classes.

I studied geography for six years. In textbooks, migration is often simplified as the tension between “push factors” like civil war or boredom, and “pull factors” like good schools or job opportunities.

Love is probably the most underrated.

The coronavirus has killed over 150,000 people in my country and more than 600 in Julie’s. In April, Ruth died in a care facility from COVID-19 complications. Because of the virus, our family couldn’t be by her side.

But the virus has not stopped love.

On July 23, Julie and I were married in my mother’s backyard with two witnesses, my best man-slash-photographer and our minister: my AP colleague Russell Contreras. Shortly after, Julie returned to New York.

Now, every night, Julie and I chat via video, watch our favorite shows together and play video games. We are together enough for now. Julie is chatting on the phone with her parents across an ocean. And I am with my last living grandparent, a 89-year-old Minnesotan, on Zoom calls and in emails.

Things could be better. But from where we stand, love is winning.

Virus Diary, an occasional feature, showcases the coronavirus pandemic through the eyes of AP journalists around the world. Cedar Attanasio is a corps member for the Associated Press/Report for America Statehouse News Initiative. Report for America is a nonprofit national service program that places journalists in local newsrooms to report on under-covered issues. Follow Attanasio on Twitter at http://twitter.com/viaCedar