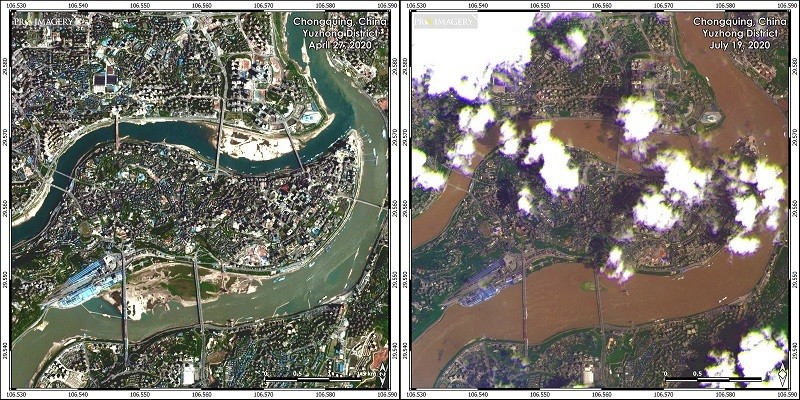 TAIPEI (Taiwan News) — In the wake of some of the worst flooding China has witnessed in decades both above and below the Three Gorges Dam along the Yangtze River, Taiwan News has obtained satellite images showing the true extent of the floodwaters in major cities during the river system's "No. 2 Flood" of the year.

After two months of torrential rains and tremendous flooding across the Yangtze River, Yellow River, and Huai River, China's state-run mouthpiece Xinhua on July 29 cited the Ministry of Emergency Management as saying the "rain-triggered floods" have affected 54.8 million people in 27 provincial-level regions, as of July 28. Despite the vast scale of the disaster, the government is reporting a miraculously low 158 dead or missing, a drop of 53.9 percent from the five-year average.

Xinhua says that 3.76 million people have been evacuated from flood-ravaged areas. Amid the onslaught, 41,000 homes have collapsed and 368,000 have been damaged.

A total of 5.28 hectares of farmland has been damaged, and direct economic losses have climbed to 144.43 billion Chinese yuan (about US$20.66 billion). Compared with the average over the same period in the past five years, the number of people affected by floods this year has increased by 23.4 percent, the number of evacuations by 36.7 percent, and direct economic losses by 13.8 percent.

Upon request, Canadian satellite imaging company ProImagery provided images of the cities of Wuhan, Nanchang, and Chongqing before the massive floods started and after the "No. 2 Flood" started wreaking havok on the region. The following images were captured by PlanetScope 3-meter resolution satellites and processed by ProImagery.

Chongqing, which sits at the headwaters of the dam on the Yangtze River, began experiencing torrential rain and severe flooding on July 15. Tremendous downpours beginning that day caused severe flooding across the city, with 188,025 people in 19 districts and countries affected, as well as 1,000 houses destroyed and 6,000 hectares of crops inundated, reported China News Service.

In a before and after comparison of Chongqing's Yuzhong and Nan'an Districts, what were once sandbars, islands, and docks in April are replaced in July with a thick, brown soup that covers the entire span of bridges, threatening to swallow them up. River traffic of boats carrying goods seems to have dropped to zero by July, calling into question the communist country's ability to maintain the alleged 3.2 percent GDP growth it claimed for the second quarter. Wuhan, the site of the catastrophic coronavirus (COVID-19) outbreak sits on the Yangtze River below the Three Gorges Dam and thus is at the mercy of the colossal dam's floodgates. Tremendously elevated water levels seen in Wuhan late June caused residents to suspect the Three Gorges Reservoir has been kept low by unleashing the sluice gates out of fears that this summer's floods upstream would overwhelm the mammoth showpiece project.

On July 17, China's state-run mouthpiece Xinhua reported that the "No. 2 Flood" of 2020 had formed on the upper reaches of the Yangtze River. When the massive flood impacted the Three Gorges Dam, the inflow reached 61,000 cubic meters per second by 8 a.m. on July 18, marking it the biggest flood to hit the dam at that point. Nanchang sits on Poyang Lake, China’s largest freshwater lake, which is situated on the lower reaches of the Yangtze River and is affected by the outflow of the Three Gorges Dam. In previous years, the dam has been blamed for causing Poyang Lake to shrink up and almost completely evaporate in 2016.

On July 18, Chinese state-run media reported that firefighters finished filling in a 188-meter (620-foot) break on Poyang Lake that had caused widespread flooding across 15 villages and agricultural fields in Jiangxi province after a dike had given way nine days prior. More than 14,000 people were evacuated.

What appear to be islands and riverfront green areas on May 19, are completely submerged by what resembles a bright green ooze by July 17. As bad as these floods were, the Changjiang Water Resources Commission of the Ministry of Water Resources on July 26 announced the "No. 3 Flood" was striking the upper reaches of the Yangtze River Basin. The mammoth flood surged down the Jialing River, a tributary of the Yangtze, submerging the ancient town of Ciqikou and inundating low-lying areas of the megapolis Chongqing, including its famous landmark Chaotianmen.