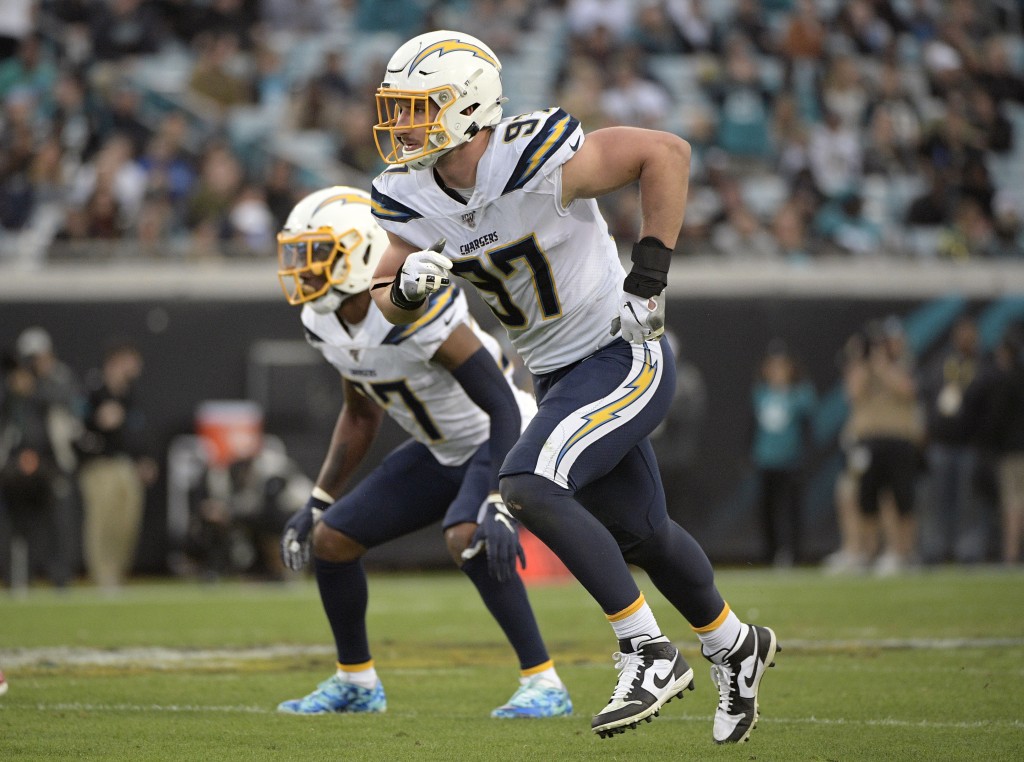 SANTA CLARA, Calif. (AP) — The potential for a Bosa brothers reunion in the NFL will have to wait at least a few more years.

With big brother Joey signing a long-term extension with the Los Angeles Chargers last week and younger brother Nick having three years left on his rookie deal with the San Francisco 49ers, the pass rushing stars won’t be linking up on the same team anytime soon.

“We spent every waking hour together the past six months, so obviously we had conversations like that,” Nick said about a possible reunion. “We were pretty confident that the Chargers were going to help get it done. I’m really happy they did. Joey loves his team and his teammates so he’s happy. He’s just happy to be stress free and able to just go to work now. Hopefully, maybe later in our careers, (we can) get together. But we’re focused on our own paths right now.”

The brothers who went from stars at Ohio State to top five draft picks in the NFL are doing just fine on their own. Joey Bosa has 40 sacks in 51 games his first four seasons, making two Pro Bowls and earning a five-year, $135 million extension that made him the NFL’s highest-paid defensive player.

Nick Bosa made a big impression in his debut season last year. He had nine sacks, won Defensive Rookie of the Year and helped the Niners reach the Super Bowl.

Nick Bosa ranked third in the NFL as a rookie with 68 pressures, according to SportsInfo Solutions, and hopes to be able to turn more of those calls into sacks this year with better technique.

He also believes he’s in better shape after spending this offseason working out with Joey and a trainer in south Florida after spending last offseason rehabbing from a core muscle injury and preparing for the draft.

“I think I’ve gotten all the benefits and I’m feeling it out here in these workouts and these runs we’re doing,” he said. “I feel like I’m by far in the best shape that I’ve ever been. I don’t look much different because we don’t train to body build. We train to play football. I think it will show.”

About the only thing that didn’t go right last season for Nick Bosa was the ending. After dominating the first three quarters of the Super Bowl against Kansas City with four pressures and one sack of Patrick Mahomes, Bosa and the Niners couldn’t finish the job.

Mahomes led three TD drives in the fourth quarter to turn a 10-point deficit into a 31-20 victory with the biggest play coming on a third-and-15 conversion to Tyreek Hill that started the comeback.

It’s a play many 49ers fans are still bitter about because they believe Bosa was held by tackle Eric Fisher, giving Mahomes the extra split second he needed to complete the 44-yard pass.

“Was I held? It comes down to the opinion of a human being. That’s what refs are, they’re human beings,” Bosa said. “So if they think it’s holding, it’s holding. Could have been holding and it could have not been holding. Just depends what he thinks. I’m not going to say that’s the reason we lost the game, because there’s plenty of opportunities where I could have done better. ... It’s definitely good motivation. First year, you get there and you’re seven minutes away and a nightmare of a situation happens.”

Bosa is intent on ruining the dreams of opposing teams once again this season. He’s also excited to get the opportunity to go up in practice against seven-time Pro Bowl tackle Trent Williams, acquired this offseason to replace the retired Joe Staley.

Williams said the chance to match up in practice with a player of Bosa’s caliber will benefit him greatly after he sat out all last season in Washington.

“He’s going to be a pivotal tool for me to use to knock the rust off,” Williams said. “Probably one of the biggest challenges that I can face all year is Nick. I think he’s one of the top four or five rushers in the game. To get that work and be able to have that every day and we can kind of bounce ideas off each other and talk each other through it. I think it’s going to work out for the best case for me. And I hope definitely he gains just as much as I do from it.”