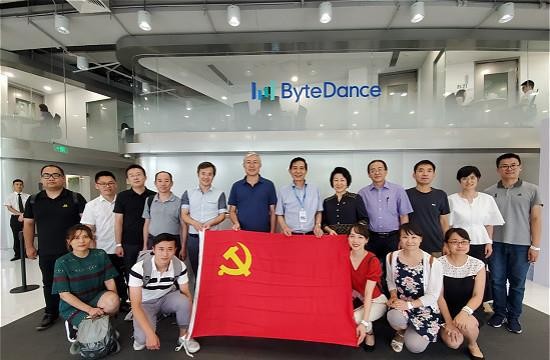 TAIPEI (Taiwan News) — As speculation reaches a fever pitch over the fate of TikTok, a photo has surfaced showing top executives posing with party members and a communist flag inside the parent company's headquarters in Beijing — making the close ties between the corporation and the Chinese Communist Party (CCP) abundantly clear.

Meanwhile, U.S. President Donald Trump is giving Microsoft until Sept. 15 to reach a deal to purchase short-video app TikTok from its Chinese owner ByteDance before banning the app from the U.S.

On Wednesday, human rights activist Jennifer Zeng posted on Twitter a photo of a CCP event held inside the corporate headquarters of ByteDance in Beijing's Haidian District, showing employees and CCP members holding a communist banner. The photo originates from a report on a CCP event held at the headquarters last July.

Zuo then emphasized the study and implementation of Chinese Chairman Xi Jinping’s (習近平) new era of socialism with Chinese characteristics as the main education theme. Zeng told Taiwan News that this was all party talk to "preserve the CCP's power and promote CCP's model to the world."

Both U.S. Secretary of State Mike Pompeo and White House trade adviser Peter Navarro have accused Chinese companies such as TikTok of passing on user data to the Chinese government, but TikTok has denied this. In October 2019, in response to the call for an investigation from U.S. senators, TikTok issued a statement in which it wrote: We have never been asked by the Chinese government to remove any content and we would not do so if asked. Period."

All Chinese companies, public or private, are required to have a member of the Chinese Communist Party (CCP) to hand down official party edicts. In addition, many companies, have an internal CCP committee that comprises part of the governance structure.

ByteDance has had a party committee since 2017 and is headed by CCP secretary and company editor-in-chief Zhang Fuping (張輔評), reported Human Rights Watch. Members of the committee hold regular gatherings at which they study speeches by Chinese Chairman Xi Jinping (習近平) and "pledge to follow the party in technological innovation."

In addition, ByteDance on April 25, 2019, signed a strategic cooperation agreement with the Ministry of Public Security's Press and Publicity Bureau (公安部新聞宣傳局) in Beijing. The agreement was billed as "aiming to give full play to the professional technology and platform advantages of Toutiao and Tiktok in big data analysis," strengthen the creation and production of "public security new media works," boost "network influence and online discourse power," and enhance "public security propaganda, guidance, influence, and credibility," among other aspects.