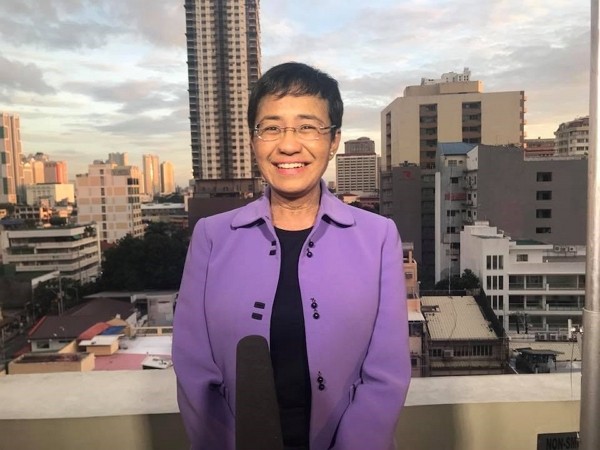 In an interview with CNA, the Filipino-American journalist said that people in the Philippines are very angry about the country's worsening pandemic situation. She said the public does not oppose a national lockdown but that it is upset by the government's handling of the outbreak.

Ressa lamented that while the Philippine Senate is endowed with enormous power and a large pandemic budget, the government has still failed to meet citizens' expectations. She said many fear the outbreak is spiraling out of control.

The veteran journalist also mentioned Manila's attempt in April to have Taiwan deport a Filipina caregiver for being critical of Philippine President Rodrigo Duterte, saying she was pleased by the Taiwanese government's refusal to do so. She said the incident fully demonstrates Duterte's contempt for his critics and emphasized that the deportation request was clearly illegal.

Ressa said democratic values and press freedom are being challenged not only in the Philippines but around the world, including in Hong Kong. She added that the responsibility of journalists cannot be overlooked and that she will continue to do her job and reveal the truth.

While commending Taiwanese President Tsai Ing-wen (蔡英文) for her leadership during the pandemic, Ressa referred to the country's healthcare system as "enviable." She called Tsai an example of a successful female leader and expressed hope that the Philippine government could model her and become more rational.

Honored by Time Magazine as Person of the Year in 2018, Ressa made a powerful enemy in Duterte through her tough scrutiny of his policies. The Philippine leader has vowed to expose her as a "fraud" and said it's "too early" for her to enjoy her global recognition, according to CNN.