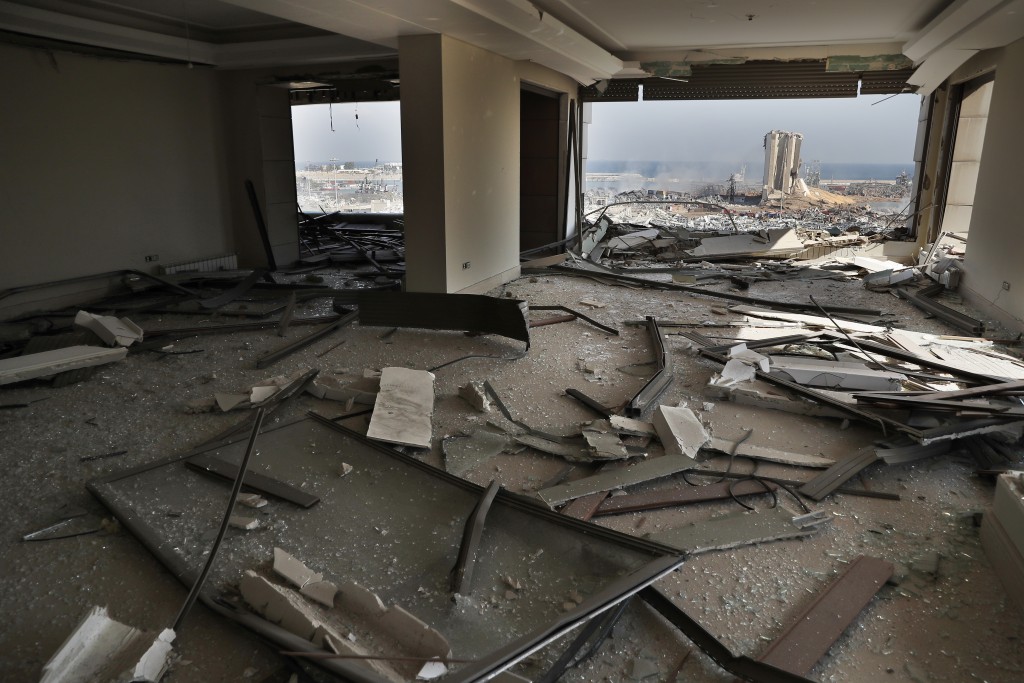 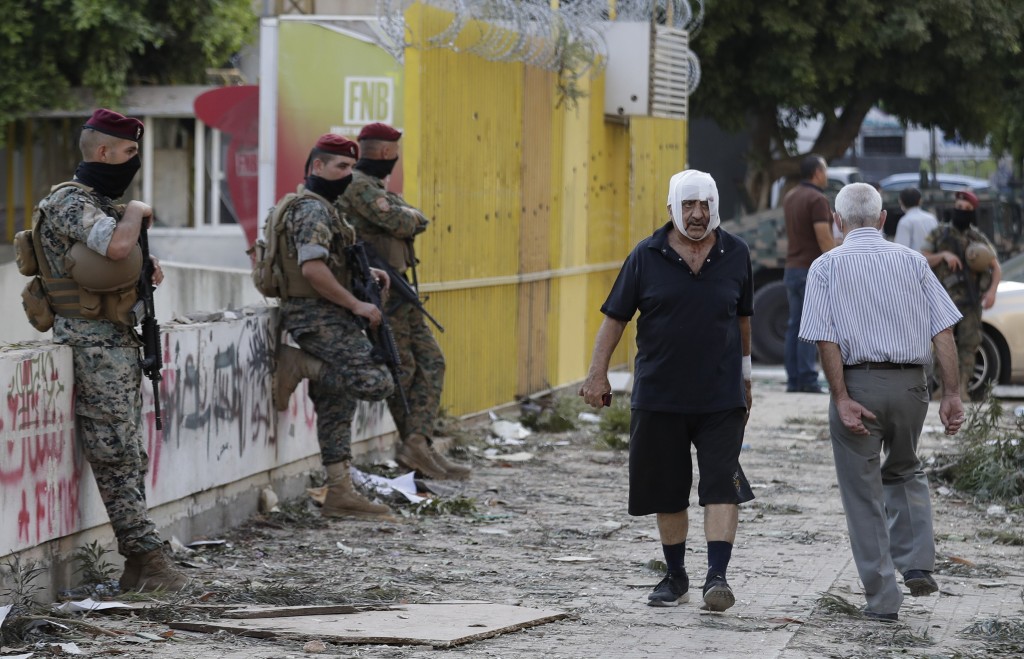 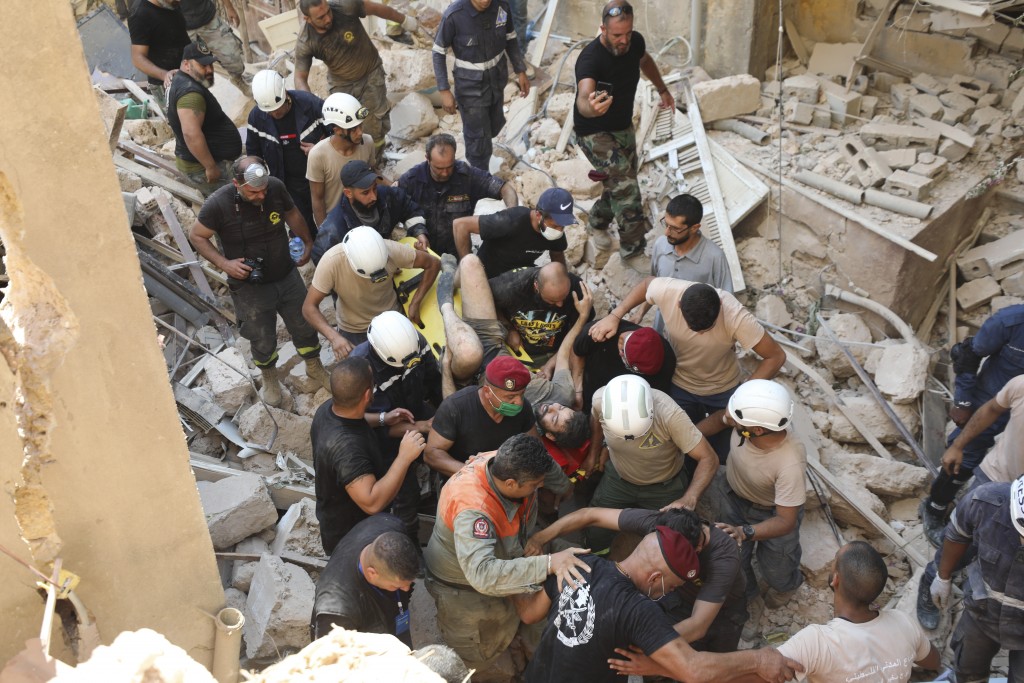 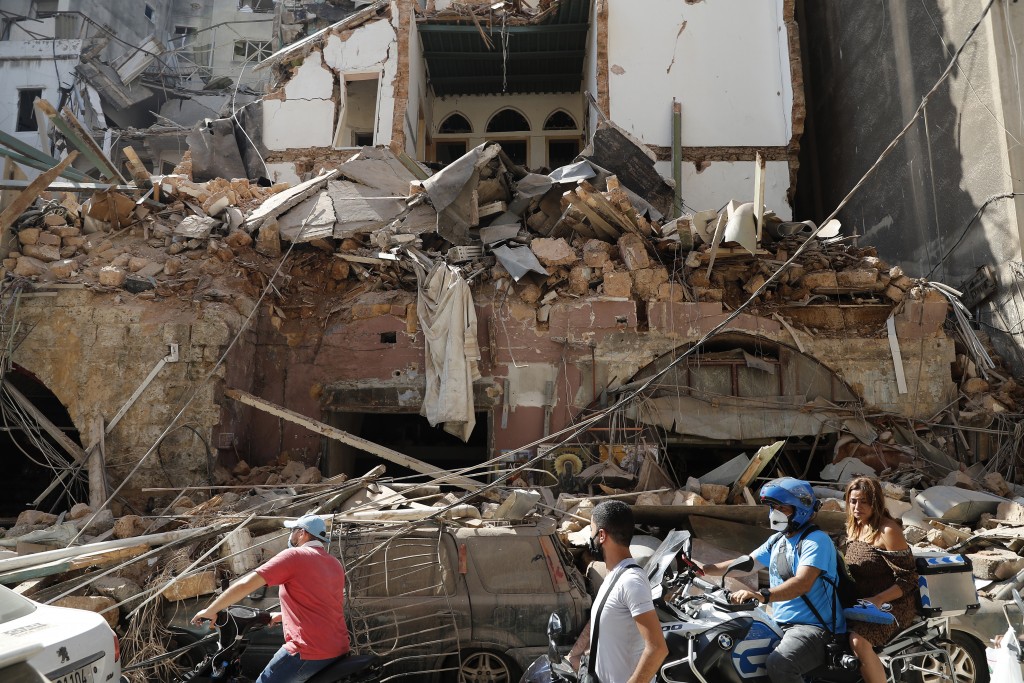 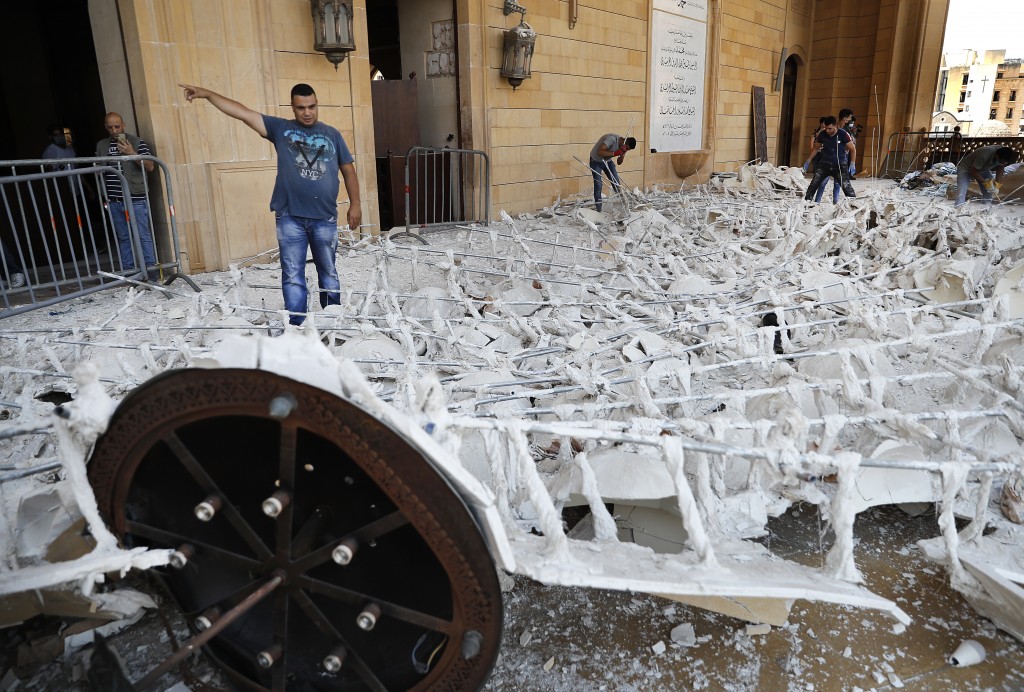 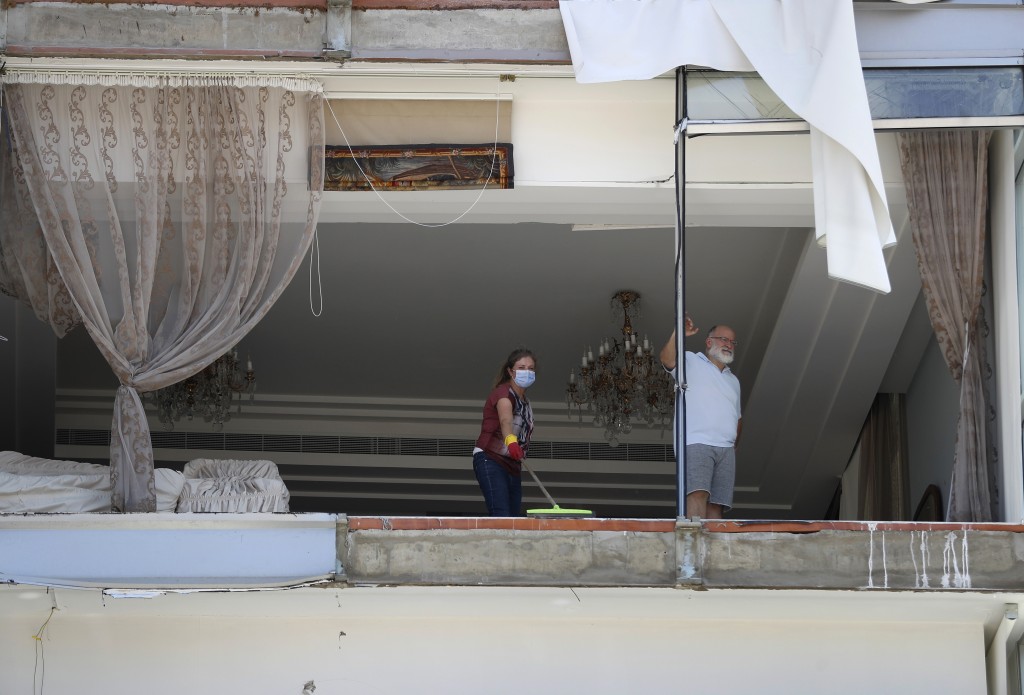 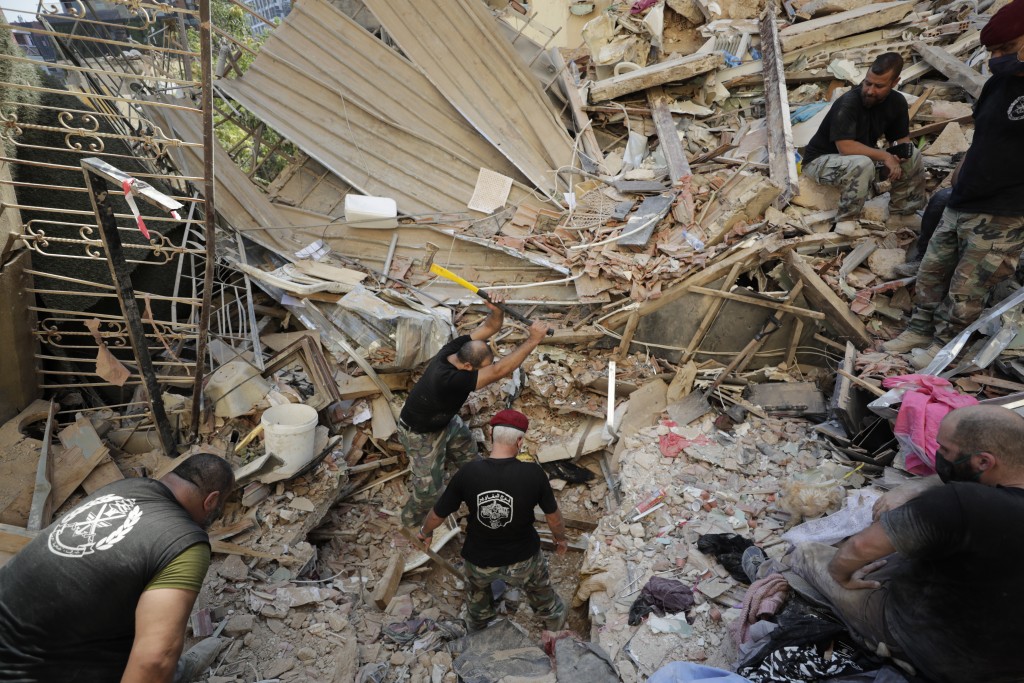 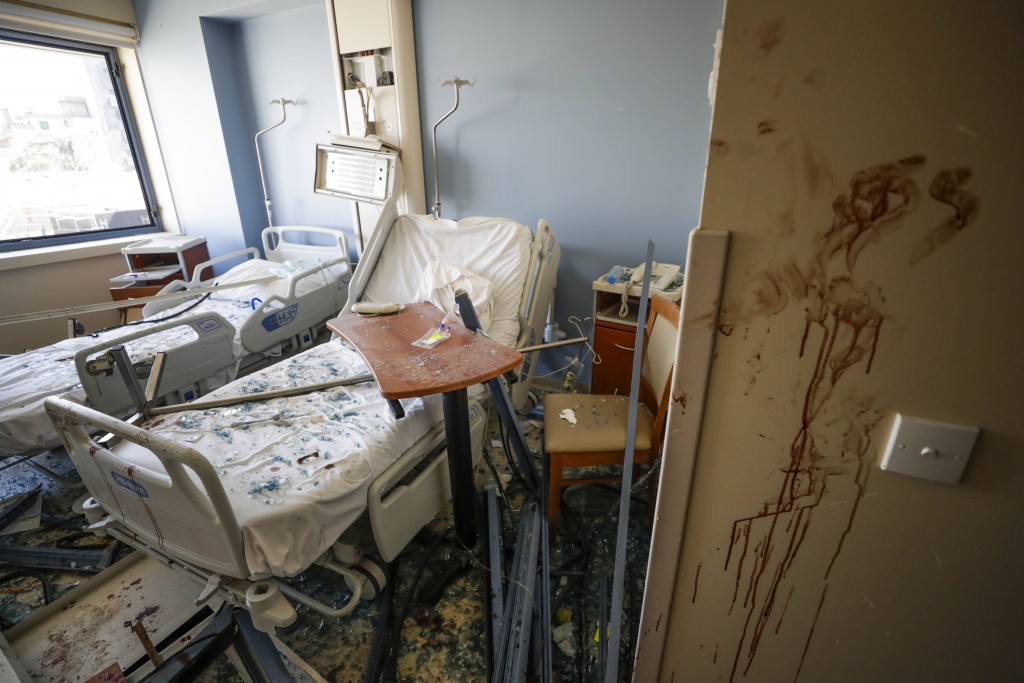 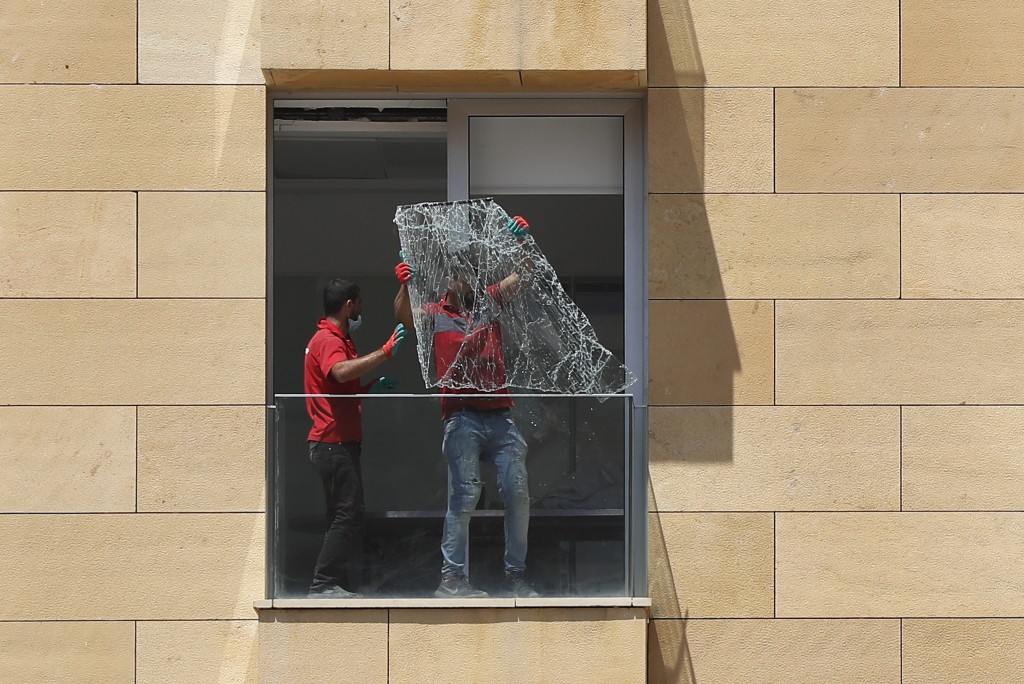 BEIRUT (AP) — Residents of Beirut —stunned, sleepless and stoic — emerged Wednesday from the aftermath of a catastrophic explosion searching for missing relatives, bandaging their wounds and retrieving what's left of their homes.

The sound of ambulance sirens and the shoveling of glass and rubble could be heard across the Lebanese capital. Almost nothing was left untouched by the blast, which obliterated the port and sent a tide of destruction through the city center.

Elegant stone buildings, fashionable shopping districts and long stretches of the famed seaside promenade were reduced to rubble within seconds of Tuesday's blast.

The explosion appeared to have been caused by a blaze at a fireworks warehouse that ignited a stockpile of ammonium nitrate stored at the port since 2013. But many blamed the catastrophe on the country's long-entrenched political class, with some saying it marked the final straw after decades of corruption and neglect.

At least 100 people were killed and more than 4,000 wounded. The number of dead was expected to rise as rescuers sifted through the rubble.

“Beirut is gone” said Mohammed Saad, an out-of-town driver making his way through the mangled streets.

“We don’t deserve this,” said Riwa Baltagi, a 23-year-old who was helping friends retrieve valuables from their demolished homes.

Some of the worst damage was in the leafy neighborhoods of Mar Mikhael and Gemayzeh, where the blast damaged some of the few historic buildings that survived the 1975-1990 civil war. Balconies had dropped to street level, where shops and restaurants were buried and chairs and tables turned upside down.

“I have nowhere to go,” a woman said as she wept in what remained of her home in Gemayzeh. “What am I supposed to do?” she screamed into her mobile phone.

Furniture and cushions were strewn along the streets amid the endless shards of glass. The damage could be seen across town in the popular shopping district of Hamra, and at the international airport south of the city. The blast could be felt as far off as Cyprus, a Mediterranean island some 200 kilometers (120 miles) away.

Few lamented the damage at the headquarters of the state electricity company, a symbol of the corruption and poor governance that has bedeviled Lebanon since the end of the war. Many blamed the latest catastrophe on the country's long-entrenched political class.

“They are so irresponsible that they ended up destroying Beirut,” said Sana, a retired schoolteacher who was preparing to leave her heavily damaged apartment in Mar Mikhael. “I worked for 40 years to make this home and they destroyed it for me in less than a minute.”

“The political class must go. This country is becoming totally hopeless,” she said. “It cannot get worse.”

Lebanon was already mired in a severe economic crisis, with soaring unemployment and a plunging exchange rate that had erased many people's life savings. The blast demolished a major wheat silo at the port, raising concerns that the small country, which relies on imports, may soon struggle to feed itself.

There were some glimmers of hope amid the tragedy: Volunteers could be seen ferrying the wounded to hospitals on trucks and motorcycles, while others provided first aid.

A widely circulated video showed a crowd erupting in applause as a civil defense worker was rescued from under the rubble. In another, showing the moment of the blast, a nanny grabs a little girl and pulls her to safety as the windows of the apartment shatter inward.

Throughout the night, radio presenters read the names of missing or wounded people. An Instagram page called “Locating Victims Beirut” sprung up with photos of missing people. Another account helped to connect the newly displaced with hotels and homeowners who were willing to host them.

Lebanese have been forced to learn self-reliance throughout the country's painful history. Beirut was split in half during the 1975-1990 civil war, and in the years since has been rocked by a war with Israel, targeted killings and terror attacks.

But Tuesday's explosion was the worst the city has ever seen.

Children were among the thousands rushed to hospitals, where many patients had to be treated in hallways and parking lots once the wards filled up.

He estimates the blast caused up to $20,000 worth of damage to his pub, where business was already suffering because of the economic crisis and a coronavirus lockdown.

“If the ruling class wants us to leave, let them give us tickets and we will go,” he said.