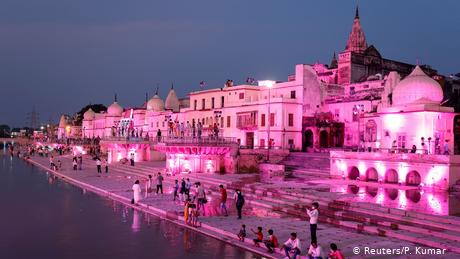 Indian Prime Minister Narendra Modi will take part in the groundbreaking ceremony for a controversial Hindu temple on Wednesday morning.

Modi will symbolically lay a 40-kilogram (88 pounds) silver brick foundation stone, to formally start the construction of a temple dedicated to the Hindu deity Ram in the city of Ayodhya in the north Indian state of Uttar Pradesh.

Modi is expected to also release a postage stamp on the Ram Janmabhoomi temple. The city of Ayodhya has been in preparations for the grand ceremony since Monday, with roads leading up to the temple decorated with hoardings of the proposed Ram temple and the deity Ram. Most shops close to the temple have been painted yellow.

Ayodhya is widely believed by several Hindus to be the birthplace of Hindu deity Ram. The site of the temple was formerly occupied by a 16th century mosque, the Babri Masjid, built by Mughal emperor Babur. The mosque was demolished in December 1992 by Hindu extremists. The mosque's demolition led to riots across India, killing 2,000 people.

In November 2019, the Supreme Court of India allowed the construction of a temple on the site. In February this year, Modi announced that the government had finalized an authority to build the temple.

The construction of the Ram temple is one of the leading items on the agenda of the Bharatiya Janata Party (BJP)-led government, to appease its voter base of Hindu nationalists.

Modi's decision to attend the ceremony has been criticized by certain sections of the Indian populace. On Tuesday, about 300 people, including academics, journalists and some political leaders, appealed to the Prime Minister "to desist from participating in a public function that will have long term negative ramifications for the democratic, secular fabric of the country."

Meanwhile, the run-up to the ceremony saw some controversy, when the All India Muslim Personal Law Board released a statement comparing the Babri Masjid to the Hagia Sophia in Turkey, which was recently converted from a museum to a mosque. "Usurpation of the land by an unjust, oppressive, shameful and majority appeasing judgment can't change its status. No need to be heartbroken. Situations don't last forever," said the board.

Critics of today's event have raised concerns with maintaining social distancing norms, at a time when India is grappling with rising cases of the coronavirus. Recently, India's Home Minister, Amit Shah, was diagnosed with the virus.

The district magistrate of Ayodhya told The Print, an Indian news publication, that there would be a distance of at least 8 feet (2,5 meters) between seats for the program. The Chief Minister of Uttar Pradesh, Yogi Adityanath, has reportedly asked officials to not breach social distancing norms by taking selfies with dignitaries attending the event.

About 175 guests are expected to attend the event. About 135 saints, from India and Nepal, have been invited. The former litigant in the case over the land allocation, Iqbal Ansari, has also been invited.

Two of the priests conducting daily rituals at the temple site have tested positive, along with four police officers in the area.

For Venugopalan Sankaran, a professor of Sanskrit at the SCSVMV University of Kanchipuram in the south Indian state of Tamil Nadu, said the ceremony is symbolic of seeking permission from "mother earth" before beginning construction.

"When you start construction of anything, you seek permission from mother earth as you are going to drill, dig and do whatever is required to build a structure. As mother earth is personified (in Hindu religion), won't it be painful for you if someone harms your person?"

He justified the need for the ceremony being conducted today. "You select a proper muhuruth (time) to start with the activity. All nine planets are propitiated before laying hands on mother earth," he told DW.