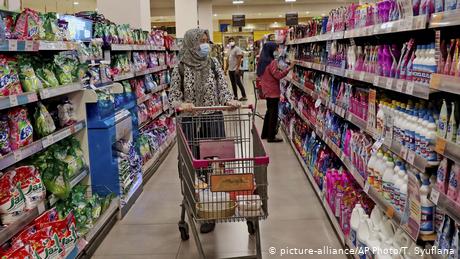 Sri Mulyani's store has been closed for the last three months. The 61-year-old, who goes by the name of Bu Mul, says the coronavirus crisis has severely damaged her business. Bu Mul has been running her store in Pasar Klewer, Central Java, for the past 15 years. She sells traditional Javanese fabric, called Lurik.

"April and August are usually the busiest months for us, so I ordered large stocks of handmade Lurik. Because of the coronavirus, I have now piles of unsold fabric lying in my house," Bu Mul told DW, adding that the total worth of the fabric is around 50 million rupiah (€2,900, $3,431).

Thousands of people associated with small and medium enterprises (SMEs) are facing a similar ordeal. Azman Syahri, who produces Songket Winda fabric in Pekanbaru, told DW that between March and June, the number of his customers had dropped by 80%.

Before the COVID-19 outbreak in Indonesia, Syahri and his workers produced up to 480 pieces of Songket every month. "We didn't lay off any workers because we still have prior orders. But if the situation persists, our business might collapse," he said.

In Palembang, South Sumatra, Muna Su'ud, a café owner, is struggling to keep her business running. Before the pandemic, she would receive around 100 customers on weekdays, and roughly 150 on Saturdays and Sundays.

"We've had to completely shut down the café for the last few months. The situation has been difficult for my permanent employees as they can't earn anything," Su'ud told DW.

SMEs are considered the backbone of Indonesia's economy, employing a majority of the country's workforce. During previous economic crises, they kept the economy afloat. But the coronavirus pandemic has hit SMEs hard, which in turn has resulted in an overall economic slowdown.

The government has been trying to support SMEs. After easing lockdown measures, it announced grants for these businesses. As many as 12 million SMEs will receive a one-off government grant of about 2.4 million rupiah (€140) each, according to Airlangga Hartarto, the coordinating minister for economic affairs. SMEs will also receive low-interest credit from banks, the government said.

Bhima Yudhistira, an expert at the Institute for Development on Economics and Finance (INDEF), told DW that the grants are more helpful for SMEs as they can reach businesses more quickly than the credit scheme offered by banks.

Until July 23, less than 20% of the total credit offered by banks was used by small businesses, Yudhistira said. "But the government's capital grants will go directly to businesses and the impact would be stronger," he added.

"The Supreme Audit Agency (BPK) and the Corruption Eradication Commission (KPK) need to cooperate with the relevant ministry to prevent corruption by cross-checking proposals for grant," Yudhistira said.

With neighboring Singapore already facing recession, experts say that Indonesia is also not far behind. Earlier this month, INDEF predicted that Indonesia's economic growth this year will be between -3.26% and 3.88% and is likely to show a slight improvement in the third quarter.

Agus Eko Nugroho, head of the Indonesian Institute of Sciences (LIPI) economic research center, predicted in June that the supply and demand for Indonesia's SMEs would be severely affected by COVID-19.

A survey conducted by LIPI in May revealed that almost 95% of Indonesia's businesses saw their sales plummet, with SMEs losing up to 75% of their sales. If the situation persists, almost 50% of SMEs can only survive until August, whereas around 72% might be out of business by November, according to the survey.

Nugroho believes that short- and long-term mitigation plans, such as increasing SMEs' level of competitiveness, are crucial to boost their performance.

Café owner Su'ud says she can't even think of expanding her business in the present scenario.

"We are slowly getting back to normal, but we are not receiving as many customers as before [coronavirus outbreak]," she said. "The most important thing is that we survive this [pandemic] together."

Meanwhile, Bu Mul is thinking of venturing into another business — something that can be profitable during the health crisis. She has opened her store again, but only once a week due to fewer customers. "I earned around 500,000 rupiah (€29) after reopening my business. I can use it to put food on my table.

"We need to keep ourselves busy and continue working."