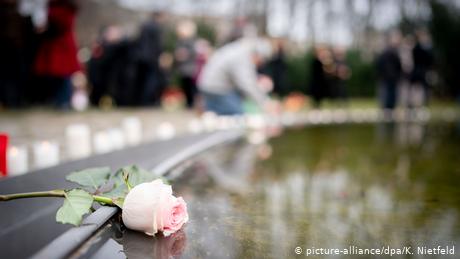 On August 2, 1944, the last 4,300 Sinti and Roma still living in the so-called "gypsy camp" were murdered in the gas chambers of the Auschwitz-Birkenau concentration and extermination camp. This day marks the Nazi Holocaust of more than 500,000 Sinti and Roma in occupied Europe.

In 2015, the European Parliament declared this date as a European day of remembrance, and EU member states have been asked to observe August 2 as a day of commemoration in their own countries. Poland was the first member state to do so.

Violent anti-Gypsyism, anti-Semitism and racism on the rise

Racist nationalism has taken hold in many countries across Europe in the form of nationalist parties and governments, and there are no longer guarantees for the state of our democracy, the rule of law and European values.

For some time now, we have seen an increase in hatred toward Sinti and Roma, Jews and other minorities. The attack in Halle last October and in Hanau this past February, are just the latest examples in Germany of an increasingly violent from of anti-Gypsyism, anti-Semitism and racism.

Sinti and Roma have been living in Europe for more than 700 years, and are citizens of their home countries. The Nazis systematically detained and marginalized us, denied us our citizenship, deported us and, in the end, tried to eliminate us completely. Extreme and radical forms of racism, anti-Semitism and anti-Gypsyism were the very essence of the Third Reich, and they resulted in the Holocaust — a crime against humanity, an unprecedented fracture of our civilization.

The 20th century was marked by two world wars, along with numerous conflicts in nearly every corner of the globe. Now, in the 21st century, we are faced with a situation in which democracies are giving up on themselves, in which the principles of the rule of law are being systematically dismantled and in which, above all, many different camps within our societies are barely able to communicate with one another.

Taken together, this is an unsustainable situation — one that can only be defeated in unison. Social tensions have always been blamed on minorities, and still are today, once again increasing the risk of displacement and pogroms against the Roma.

We can no longer remain silent

The governments of Europe must now — finally, unequivocally and once and for all — outlaw anti-Gypsyism, anti-Semitism and racism. To this end, the Central Council of German Sinti and Roma welcomes the independent expert commission on anti-Gypsyism appointed by the federal government, whose task it is to study the issue in Germany and develop recommendations to fight it.

This is the obligation imposed on us by the people murdered in Auschwitz-Birkenau, in the other concentration and extermination camps, or at the hands of the SS killing squads. Europeans must face it together.

Romani Rose has been chair of the Central Council of German Sinti and Roma since 1982. He lost 13 relatives in the Holocaust.