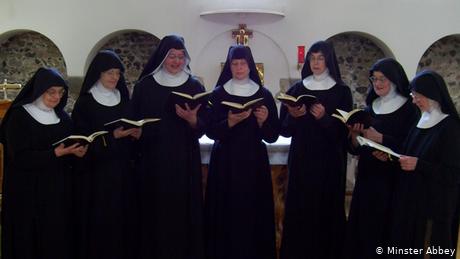 "We've always had guests in the chapel. But since we couldn't receive them because of the coronavirus, we decided to stream our services," explained Sister Walburga, a Benedictine nun at Minster Abbey in Kent, southern England.

She's the youngest of 11 nuns, and launched the abbey's Twitter account almost a year and a half ago. Today, it boasts more than 5,000 followers, and she's responsible for keeping it up-to-date and making sure the midday office, a daily prayer service, can be followed live on YouTube.

Technically, it's fairly simple. The images aren't especially riveting — the camera is fixed on a view of the altar and the high, sun-filled windows — but the singing nuns can be heard loud and clear. Sister Walburga told DW that the viewer numbers ranged from 30 to 50 each day, but said it was important for the nuns to once again share their song and prayers with others. She'll also send the text of the service by email on request. "All the nuns see this as a positive thing, even our oldest one who is 94!"

'We had no livestreaming experience'

Minster Abbey isn't the only religious establishment to have turned to livestreaming during the coronavirus pandemic. In Germany, several monasteries and convents have also been using digital means to ensure worshippers can take part in their services.

"We launched on March 21 after rehearsing for about three days," said Father Maximilian from Münsterschwarzach Abbey, northwest of Nuremberg. "We had no livestreaming experience." He told DW that it took "quite a lot of rehearsing and readjusting until the quality was acceptable."

His abbey's services have been drawing between 70 and 120 live viewers, with several hundred tuning in later. There has been "plenty of praise and thanks" — but also technical tips, along with donations. Many people have also filled out the abbey's online form asking for a particular prayer.

'Monasteries are daring to show normality'

The German Conference of Superiors of Religious Orders (DOK), which represents Catholic orders in Germany, has a list of many of the various available streaming sessions on its website. Spokesperson Arnulf Salmen said the pandemic had "forced" congregations to become more familiar with new forms of communication, such as Facebook, YouTube, Twitter and Zoom — and the experience had been positive.

"Some of the orders have been extremely professional despite having very simple means," he said, adding that there was always a community member on hand to help with any technical issues.

Many of the larger monasteries have expanded their online offering. Apart from Münsterschwarzach, the St. Ottilien Archabbey and the Roggenburg Abbey in Bavaria, as well as the Gerleve Abbey and the Stiepel Priory in North Rhine-Westphalia, also decided to stream their services. In Austria, the Cistercian Abbey of Heiligenkreuz has been streaming the audio of all five of its daily offices.

Viera Pirker, of the University of Vienna's theology department, finds the whole development "very interesting," in part because the traditional offices in these establishments aren't usually that accessible to the public.

"This should not be seen as advertising," she insisted. "The monasteries simply want to maintain their spiritual services and allow people to participate." After all, this is about "solidarity within the church."

Pirker also thought it was good that establishments hadn't tailored or perfected their livestreams in any way. To her, it didn't matter that somebody's voice might not be perfect, or that the camera wasn't flattering. "It's just normal, and the monasteries are daring to show normality."

'Church should go toward the people'

The Protestant Stadtkloster Segen is church in a touristy part of Prenzlauer Berg in Berlin, opposite a Jewish cemetery and not far from one of the city's biggest organic supermarkets. It began streaming its Sunday evening service on Zoom after Easter, attracting between 35 and 50 viewers every week.

"It was an important experience for us," said Georg Schubert of the Don Camillo community, which holds the services. "Some Sundays, we couldn't have a service. But we were able to find a way for people to do the same thing at the same time."

Read more: Religious celebrations in the time of coronavirus

Schubert also said the live nature of the experience was crucial. One of the regular viewers is a New Yorker who had once stayed at the Stadtkloster, while another is a neighbor who doesn't dare come to the church because she's in the high-risk category for COVID-19.

Schubert said he wanted the church to continue with the weekly streaming session. "It's important for us as the church to go toward people, and not simply expect them always to come to us."