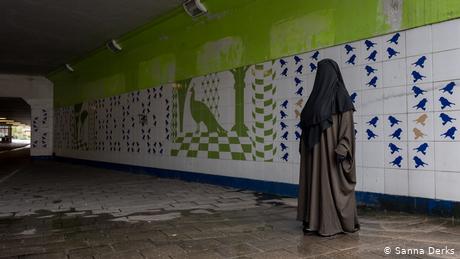 Walking quickly across the Bos en Lommerplein, a square in the west of Amsterdam, Emarah* stands out. Raindrops run down her long black burqa, soaking the bottom of the black body-covering garment. It has been three years since she first started wearing a burqa, which also covers her face.

"People often think that I have to wear it as my husband says so, but it is my own choice," she tells DW. "Actually, I did not have a husband when I started wearing it.

"It is really difficult wearing the burqa. People just see you as the enemy. It makes me feel totally alone, pushed in a corner," she says.

It's unfair, Emarah says, frustration evident in her voice. "I am being discriminated against only because I want to practice my religion, for my choice."

On August 1 it will be one year since the Dutch government approved a controversial law prohibiting clothing that "completely covers the face." It followed similar, albeit stricter, bans in France and Belgium.

The Dutch ban prohibited such clothing from being worn in public transport or in public buildings such as schools, hospitals and government buildings. Unlike in France and Belgium, the burqa is still permitted to be worn in the streets.

Public safety was the main reason given by the government for the ban, a process initiated 14 years ago by Geert Wilders, leader of the right-wing Party for Freedom. The penalty for refusing to remove a face covering is a fine of between €150 and €450 ($177 and $529).

However, according to a spokesperson for the Dutch National Police Force, only a "handful" of people have been fined in the past year for wearing the garment.

"Reactions in public have become more aggressive than ever before," says Emarah, despite the fact it is still legal to wear the burqa on the streets. Prior to the ban she would experience violence, she says. "When I was in the supermarket, people would hit me with a shopping cart on my ankles to get me to move away."

But she says that levels of aggression have escalated significantly: "A man even tried to hit me with his car."

Sisters Anne and Truus Postma are having tea on the Lambertus de Zijlplein in the west of Amsterdam, looking out over merchants selling fresh vegetables at the Monday market. It's a popular migrant neighborhood.

The square, they say, has not changed much since the ban. "I prefer to see their faces — but there were hardly any women with such face coverings anyway," says one of the sisters.

Leila sits on a wooden bench on the other corner of the square. She says she is happy with the ban.

"It simply is too much," she explains. "You are living in a European country, why do you need to cover yourself like that? A scarf like the one I am wearing is good enough."

Giulio Bonotti, a Somali-Italian worker for the city council, is also happy with the legislation. "I don't like those veils at all, it is torture," he argues. "It is like the woman is worth nothing at all, they are right to ban the burqa."

Despite being famous around the world for its liberalism, "the Netherlands is becoming less and less tolerant," says Emarah, with a sigh. She views the law as "an attack on the Islam" and says it goes directly against her right to freedom of religion as enshrined in the Dutch constitution and the European Convention of Human Rights.

If she was forced to remove her burqa, she says "it would feel humiliating …it was my choice to put it on, and I would want to make the choice to take it off."

Safa*, a practicing 30-year-old Muslim, feels the ban sowed fear among the wider Muslim society, despite only a tiny minority of women — perhaps 150 — wearing the burqa or niqab in the Netherlands.

Some of her more religiously conservative friends have now emigrated to other countries, in particular the United Kingdom. "They don't feel welcome here anymore," she explains.

That sentiment was particularly high when Dutch newspaper Algemeen Dagblad published an article in July 2019 calling for "citizen arrests" of women breaking the law. "When that happened even young, moderate Muslims started to get concerned," says Safa.

COVID-19 masks: One rule for them, another for everyone else?

Emarah and other women wearing a niqab or burqa see an irony in the new COVID-19 rules in the Netherlands, which made face masks mandatory on public transport.

Women, it seems, are now punished for both wearing and for not wearing face coverings, depending on their purpose. "It is totally contradictory," argues Emarah, who thinks it's wrong that public health is deemed to be an acceptable reason for covering a face, but religious belief is not.

She isn't alone. A number of organizations, led by the group Don't Touch My Niqab, are now appealing to the Dutch Foreign Ministry, the House of Representatives and the Senate to revoke the face-covering law, appealing that in light of recent COVID-19 rules legal arguments supporting the ban are void.

Emarah remains dedicated: "I will stand up for my right."

*Names have been changed to ensure the women's anonymity.