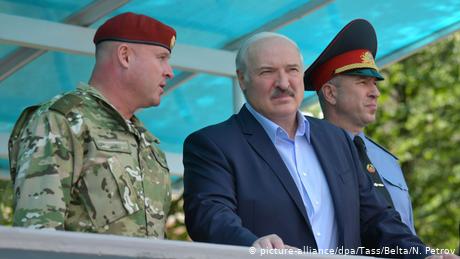 Relations between Russia and Belarus are strained following the arrest of 33 Russian men who have been detained in the capital, Minsk, since Wednesday.

The men are officially accused of plotting a terrorist attack, and authorities have said they belong to the Wagner Group, a private Kremlin-linked security and paramilitary organization. Authorities said they came to Belarus with the intention of destabilizing the situation ahead of the presidential election on August 9, adding that some 200 additional members of the group are said to be in country.

Read more: Minsk and Moscow: Dependency has its price

Denis Korotkov, an investigative journalist for the Russian newspaper Novaya Gazeta, told DW that at least half of the detained men can be linked to the Wagner Group. Korotkov, who has previously received anonymous death threats over his investigations into the organization, said he has proof: not just the Russian passports shown on Belarusian TV that purportedly belong to the men, but also documents he has at hand.

The Wagner Group is led by Dmitriy Utkin, a former officer with the Russian military intelligence agency GRU. The organization has left traces of its activities in eastern Ukraine, Syria and, most recently, Libya. Paramilitary groups are officially banned in Russia, but in reality they're not just tolerated but often benefit from state financing. Officially, the existence of such mercenary groups is denied, as is any state involvement, but there exists indirect proof that the Russian Defense Ministry has given its full support to the Wagner Group.

Timing of arrests is suspicious: observers

The Russian men attracted the attention of authorities at a sanatorium near Minsk because, unlike usual Russian tourists, they were wearing "military-style clothing" and not drinking alcohol, according to the state-run Belarusian news agency BelTA.

In a skeptical response on Thursday, Kremlin spokesman Dmitry Peskov said that many Belarusian men who traveled to Russia wore similar clothing, did not exhibit typical behavior and did not drink alcohol. But, he added, this didn't mean they'd broken any laws. A day later, he said that Russia expected Belarus to quickly free the detainees.

"The unwarranted detention of the 33 Russian citizens doesn't fit into the framework of the allied relations,'' he told reporters in a conference call on Friday. "We expect our Belarusian allies to clear up this incident immediately and release our citizens.''

Observers say the timing of the arrests is suspicious. Belarusian President Alexander Lukashenko, who has been in power since 1994, is experiencing the biggest political crisis of his career. He is aiming to win a sixth term in next week's poll, but public support for the president appears to be sagging. Political analysts say there are no independent surveys to confirm this observation, but opposition candidates have been receiving an unexpected amount of support, especially in rallies attended by tens of thousands in recent days.

The only remaining opposition candidate allowed on the ballot is Svetlana Tikhanovskaya, wife of jailed blogger Sergei Tikhanovski. Lukashenko's two main challengers — Viktor Babariko, the former head of a major Russia-controlled bank, and former ambassador to the US Valery Tsepkalo — were barred from participating in the vote earlier in July.

Tikhanovski, who initially wanted to stand as a candidate himself, is now being considered as a suspect in the mercenary case, according to investigators in Minsk.

Belarusian political scientist Valery Karbalevich said authorities fear mass demonstrations in support of Tikhanovskaya, with thousands rallying in Minsk and other cities, and have aimed to put a stop to them. After the Russian men were arrested, Lukashenko called a special meeting of his security council to respond to the alleged impending terrorist attack, and ordered that security be tightened at mass events, including campaign rallies.

Read more: Opinion: Lukashenko is playing games to keep his grip on power

Several Belarusian politicians told DW that the move would mean further restrictions on the opposition. Indeed, soon after the arrests the Central Election Commission introduced new rules for candidates: Election rallies must now be cordoned off, participants must pass through metal detectors and police presence will be increased. Observers believe Lukashenko may resort to stricter measures, even declaring a state of emergency to bolster his power.

Many Belarusians remain unconvinced by the reports of the alleged mercenaries, said Andrei Kazakevich, the director of the Belarusian Institute for Political Studies — in part due to the loss of confidence in politicians and state media. "We are used to the authorities often, and in every election year, trying to manipulate society by clearly disseminating the wrong information," he told DW.

Observers in Belarus and Russia have speculated as to Lukashenko's true intentions. Are the arrests meant to anger Russian President Vladimir Putin, who is seeking to bring Belarus closer to the Kremlin, or to signal to the West that it should stay on the alert when it comes to Russia?

Piotr Petrovsky, an expert at the Belaya Rus think tank which is closely affiliated with the Lukashenko regime, wrote on Facebook that the arrest of the Russian men had clearly shown that many opposition candidates were simply puppets of the Kremlin. Lukashenko himself has warned several times of possible subversive acts prepared by people from abroad who would "take part in provocations" — with the implication being that Moscow would be behind it all.

Iryna Khalip , a well-known journalist with the Novaya Gazeta, is convinced the arrests were a "spectacle" for the West, pointing out that it wasn't something that could be "served up to the local audience." Khalip said Lukashenko was aiming to warn the West that the Wagner Group had infiltrated the country, that the "little green men" were coming to occupy Belarus. With that message, he hopes to convince the West to help Minsk in its fight against the Kremlin — instead of calling for Belarus to release political prisoners and threatening sanctions.

Kazakevich also believes Belarusian authorities are trying to pass off the repression of independent candidates as a fight against Russian interference. "That could be an influential argument for many Western politicians," he said.

What were the Russian mercenaries doing in Belarus?

It's a question with no clear answer. The Russian ambassador to Belarus has stated that the men are members of a Russian security company who simply missed their connecting flight in Minsk. Investigative journalist Korotkov believes the men, on their way to conflict zones in Syria and Libya, may have taken a different route due to the coronavirus pandemic. Other investigative reporters share his opinion.

But he is skeptical about the official accusation that the men were trying to destabilize the election campaign. He says the arrested men are all simple infantry — "machine gunners, grenade launchers, drivers" — for whom subversive provocations would be too complicated. "They certainly haven't learned anything like that," he said.