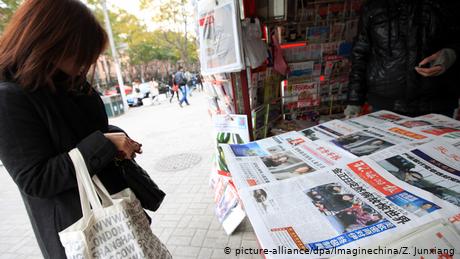 DW: You lived in China for over 20 years. What first crossed your mind when China canceled your visa?

Ian Johnson:I learned about my expulsion from China by email when I was in London. It was a bit surreal because I hadn't been included in the initial set of correspondents. I think people didn't think it would apply to me because I'm not a staffer for the New York Times.

To have been expelled in that fashion seemed slightly ridiculous. I was just part of a bilateral dispute that really has nothing personally to do with me. However, it did end up turning my life upside down.

You are caught between these two giants who are going through this power struggle and you are just collateral damage. I felt a bit powerless.

More than a dozen journalists have been expelled from China. How do you think this will affect the world's understanding of China?

The biggest thing is there will be a lot less in-depth reporting on China. Now, there is a lot of spin, and a lot of people tweeting things and coming up with ways of analyzing things related to China.

However, now there is less "boots-on-the-ground" investigative reporting that involves going out and actually talking to people.

Without that, we lack facts in dealing with China. We end up with just more people who are commenting on China from New York, Washington, London, Berlin and elsewhere.

Most media organizations only have one or two correspondents in China, and they are mostly driven by news editors. There is so much news, and correspondents often just end up spending all their time doing news.

You need to have those extra reporters who you can send off to do investigations, and I think those are exactly the people who are leaving China. In other words, China used a very measured way to target American journalists. While the US expelled dozens of Chinese journalists, China achieved a lot more with its expulsion of American journalists.

How can journalists continue to cover China with access becoming more limited?

Journalists will become a little bit like sociologists, who just have quantitative methods but not qualitative methods. You can use data but you are not going to be able to do that many on-the-ground interviews.

What do you think is the biggest difference in the US strategy against China in 2020 versus a decade ago?

The issue with the Trump administration is its amateurish foreign policy, which is at times naïve, and other times reckless and careless.

You saw this with [Chinese President] Xi Jinping, when Trump claimed that "I like Xi Jinping and he is a great guy."

Like John Bolton suggested, Trump was basically telling Xi that "do whatever you want with Xinjiang and Hong Kong. I don't care. Just give me a trade deal."

This is a very cynical and naive mercantilist view of the world, which assumes that all you have to do is to get people into the room, shake their hands hard enough and they will agree with your point of view.

At the same time, you have people in the administration who see the world in very black and white terms, and they see the US and China inextricably on some collision course. They blame China for everything. But it's just part of this pointless strategy that they have about blind confrontation.

Take the closure of consulates as an example, you close down one Chinese consulate in the US, it doesn't affect China's operation in the US that much because the US is an open society and it's very easy to figure out what's going on in the US. But if you close down the US Consulate in Chengdu, you are losing a big window into China, especially a consulate that's in charge of places like Tibet.

There is also a very vibrant civil society scene in Chengdu, because many writers would often contact people at the consulate. There were certain types of contacts that were made out of Chengdu, and those are irreplaceable.

Again, they [the Trump administration] are shooting themselves in the foot, and it doesn't make any sense.

Ian Johnson is a journalist who spent two decades living in China. He won the 2001 Pulitzer Prize for his coverage of the persecution of the Falun Gong.

This interview was conducted by DW's Taipei correspondent William Yang. It has been edited for length and clarity.