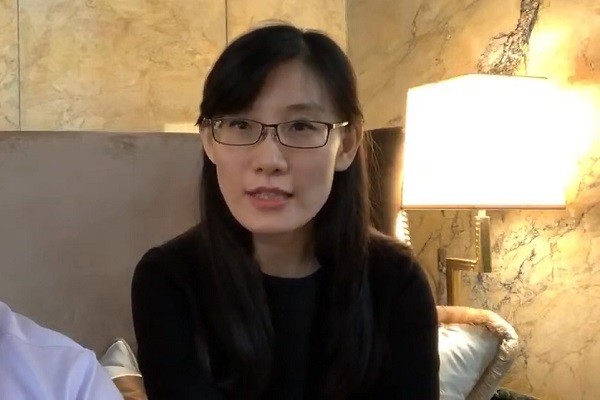 On Tuesday, Lude Press (路德社) held a livestream interview with Yan Li-Meng (閻麗夢), a virologist who was employed as a researcher at the University of Hong Kong's School of Public Health when the coronavirus pandemic began and who previously accused Beijing of covering up the initial outbreak in Wuhan. Yan said that she spoke out early on because she had seen innocent doctors and patients being exposed to the highly contagious virus.

She said that as a doctor and scientist, she really could not remain indifferent. She then claimed that during her research into the human-to-human transmission of the virus, she traced the source of the outbreak to the PLA.

"At that time, I had clearly assessed that the virus came from a Chinese Communist Party military lab. The Wuhan wet market was just used as a decoy," said Yan. She then claimed that when she reported her findings to her superiors, she was not taken seriously.

The Shandong native felt it would be impossible for her to report the discovery to the high levels of the CCP: "I knew that once I spoke up, I could disappear at any time, just like all the brave protesters in Hong Kong. I could disappear at any time. Even my name would no longer exist." She also emphasized that it was her responsibility to get the information out before being "disappeared."

She pointed out that she had been raised and educated under the CCP and knew "what kinds of things the Chinese government would do" but did not dare guess "how low [the CCP] would stoop." Yan pledged that she would continue to tell the truth about the CCP and the pandemic with the hope of accelerating the outside world's understanding of the regime and helping the Chinese people to overthrow it.

In an interview with Fox News on July 10, Yan claimed that her former supervisor, Leo Poon (潘烈文), had tasked her with investigating a cluster of SARS-like cases being reported in late December. Yan said a friend of hers who is a scientist at the Centre for Disease Control and Prevention in China told her that the virus appeared to be transmissible from human to human.

Yan claimed that Poon at first advised her to continue her investigation, but she said he later told her "keep silent and be careful" when she delivered more evidence on Jan. 16. Yan added that visiting professor and co-director of a WHO-affiliated lab in the university, Professor Malik Peiris, knew of her findings but failed to take any action.

Yan said that because she knew "how the Chinese authorities treated whistleblowers in order to conceal an epidemic," she knew she would have to leave for her own safety. The virologist said that she escaped from Hong Kong on a Cathay Pacific flight in April to "deliver the message of the truth of COVID-19 to the world."

Based on her experiments on the highly infectious nature of the disease, she criticized the Chinese government for the blanket lockdowns issued in Wuhan. She said that locking whole families together into the confines of their homes for long periods, rather than testing and isolating individuals, exacerbated the epidemic.

In response to the Fox News interview, HKU in a statement confirmed that Yan had been a post-doctoral fellow and former staff member prior to leaving the university. However, it claimed that the assertions made in the interview do not "accord with the key facts as we understand them."

In addition, the university denied that Yan had carried out research on the human-to-human transmission of the disease between December 2019 and January 2020. The school said it "does not act on hearsay" and would not comment further on the matter.

Yan co-authored a paper with HKU colleagues on the transmission of the virus in hamsters. Titled "Pathogenesis and transmission of SARS-CoV-2 in golden hamsters," it was published in the scientific journal Nature on May 2020.