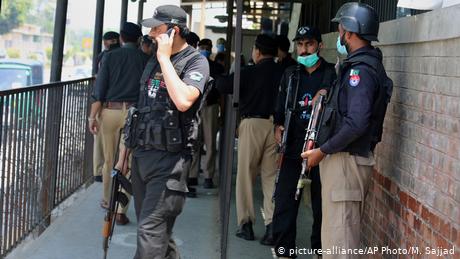 The United States on Thursday demanded action over the killing of a US citizen on trial for blasphemy at a Pakistani court.

Tahir Ahmed Naseem, a member of the minority Ahmadiyya community, was shot multiple times in the middle of a crowded courtroom in the northwestern city of Peshawar on Wednesday. The shooter was apprehended on the spot.

"We are shocked, saddened, and outraged that American citizen Tahir Naseem was killed yesterday inside a Pakistani courtroom," the US State Department said in a statement.

"Mr. Naseem had been lured to Pakistan from his home in Illinois by individuals who then used Pakistan's blasphemy laws to entrap him."

Why was Naseem on trial?

Naseem was facing allegations of blasphemy, charges that critics believe are often used to settle personal scores in the conservative Muslim nation. He was accused of telling a student at an Islamic school that he was a messiah sent by God. Naseem faced multiple charges, including insulting the Prophet Muhammad.

A hardline Islamist group on Thursday called for the release of shooter, claiming that he was defending his religion.

Questions are being raised as to how the shooter managed to get a gun inside the courtroom and through multiple checkpoints.

"We urge Pakistan to immediately reform its often abused blasphemy laws and its court system, which allow such abuses to occur, and to ensure that the suspect is prosecuted to the full extent of the law," the US State Department said, demanding action.

Although Pakistani authorities have yet to put someone to death for the offense, crowds and individuals often take the law into their own hands. More than 50 people have been victims of extrajudicial killings before their court trials had even finished.

In one prominent case, a governor in Punjab province was murdered by his own guard after he defended a Christian woman, Asia Bibi, who faced blasphemy charges. Bibi herself was acquitted after spending eight years on death row and left for Canada last year after death threats from Islamic extremists.