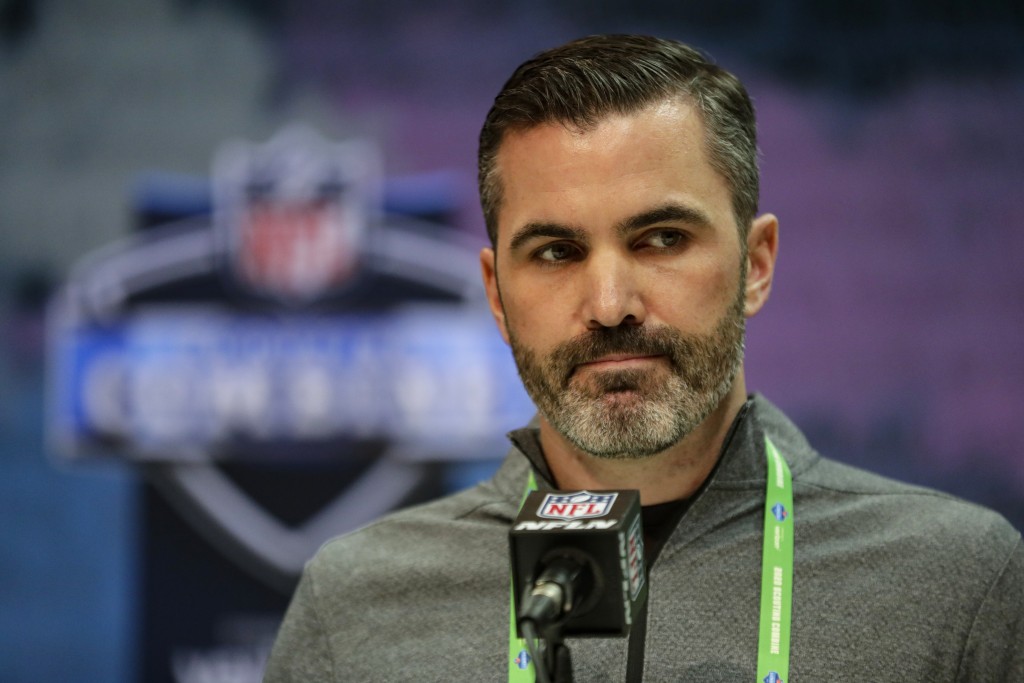 CLEVELAND (AP) — Instead of a whistle dangling from his neck, Browns coach Kevin Stefanski wears a sensor that blinks and beeps whenever he's within 6 feet of someone in the team's facility.

Nothing could have prepared him for his first training camp in Cleveland.

Stefanski said Thursday he still hasn't met many of his players in person, and the first-year coach outlined some of the team's plans — and contingencies for players opting out or getting sick — for practices next month while adhering to strict protocols laid out by the NFL to keep players, coaches and other personnel safe from COVID-19.

On yet another Zoom call with reporters, Stefanski, who was hired in January after 13 seasons as an assistant coach in Minnesota, said he'll preach more patience to his team as he begins preparing the Browns for a season that still isn't certain.

But he's confident it will happen.

“I am optimistic" he said. “I believe in this bubble.”

The scheduled opener against the Baltimore Ravens is 44 days away, but Stefanski said the worst thing he can do is rush things. Now is not the time.

“I have told the players this, I told the coaches this: We will not do too much too fast," he said. "Just not in anyone’s best interest. There are small concessions that we have to make that put us out of our comfort zone to make sure that we are staying safe and especially early on in this thing, and that is just on the advice with the medical experts.”

It's been a strange few months for Stefanski. He climbed to the top of his profession only to be faced with the unique challenge of coaching during a global pandemic. Nothing has been easy, but now that the Browns are reporting, he finally senses some normalcy.

"I can’t tell you what a great feeling it is to look out a window and there’s a practice field with football players on it. It’s been a long time coming," he said.

Stefanski remains optimistic there is going to be pro football this fall. He's been encouraged by the steps the league has taken to make it possible and called the Browns' re-purposing of their building to assure social distancing “nothing short of a miracle.”

The Browns have had two players — guard Drew Forbes, who was in the mix for a starting job, and tackle Dale Dorbeck — opt out of this season. The team has also placed three players, including punter Jamie Gillan, on the COVID-19 reserve list.

Stefanski doesn't know if any more players will decide not to play and he didn't want to speculate, “but I respect the decisions.”

And as he tries to get to know the players who have reported — “when you’re wearing these masks you got to look pretty closely because it’s hard to tell sometimes when you haven’t met somebody who it is” — he's made sure the Browns know what's at stake.

Stefanski has spoken to them at length about making good decisions when they leave headquarters. That's important to stop the virus from spreading.

“Our first team meeting was Tuesday night and talked a lot about it,” Stefanski said. “It’s a shared responsibility. It’s something that it’s not just one person’s responsibility to stay on top of, so we’re going to be counting on our veterans to show some good leadership here.

“And it’s a unique time, and I know there’s a work/life balance for our players. We understand that, but this is such a unique time. We talked so much about being a good teammate. And one of the ways you can be a good teammate is when you leave this bubble, and go into your own bubble, make sure that you make really sound decisions, and ultimately you’re taking care of your teammates and your coaches.”

NOTES: Despite the preseason being cancelled, Stefanski said the team still plans to have first-round draft pick Jedrick Wills play left tackle. He started at right tackle for Alabama. ... Stefanski has not yet spoken to tight end David Njoku since he requested a trade. ... WR Jarvis Landry “remains on schedule” after having offseason hip surgery. ... Stefanski said the Browns have a contingency plan if he tests positive, but he didn't reveal it.