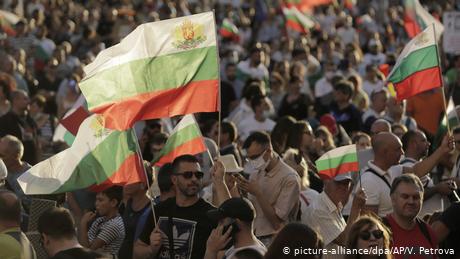 Protesters at two main intersections in Sofia on Thursday vowed to block traffic until Prime Minister Boyko Borissov and his conservative government resign.

Demonstrators erected tents in the street urging others to do the same after weeks of protest in the capital and other cities across the country.

Protest organizer Nikolay Hadjigenov told BNR public radio that blockades and other acts of civil disobedience would be maintained until the prime minister handed in his resignation.

"Borissov won't hear us. We don't have any such illusions so we must bring him down by force," Hadjigenov said. "It will be this way every day until the end," demonstrators on the city's Eagle Bridge shouted into megaphones.

The Bulgarian President, Rumen Radev — a vocal opponent of Borissov — is backing protesters, saying both the prime minister and chief prosecutor Ivan Geshev should step down.

The leadership is accused of having links with organized crime, refusing to tackle corruption, and suppressing freedom of speech.

Police chief Georgi Hadzhiev said discussions with the protesters had not been productive.

Protesters had already blocked traffic on Wednesday, with a huge crowd gathering in front of the government headquarters. "Borissov, you are a shame and a disgrace," and "Resignation" were among some of the chants heard.

Thirteen years after joining the European Union, Bulgaria remains the bloc's poorest member. According to the anti-corruption group Transparency International, it is also the most graft-ridden of the 27 member states.