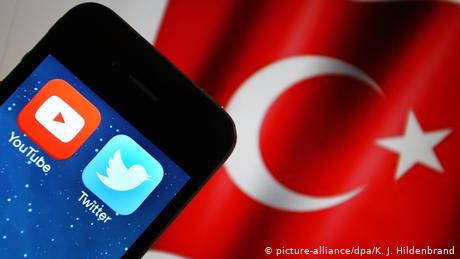 Turkey is taking steps to close the window on press freedom once and for all. News of more restrictions comes as no surprise: Dozens of journalists have been unlawfully detained and given long prison sentences in unfair trials across Turkey, especially since the failed coup attempt in July 2016. Media pluralism has been all but destroyed. Until recently, social media platforms represented the last safe haven for critical Turkish journalists.

Turkish President Recep Tayyip Erdogan is politically weakened, and has been roundly criticized on social media sites for his mishandling of the coronavirus pandemic — Turkey boasts more than 37 million Facebook users, as well as 16 million on Twitter. Now Erdogan is trying to silence his critics by forcing national controls on international social media platforms.

Online media outlets are being harassed

On Tuesday, Turkey's parliament approved changes to its 2007 law on internet crimes — a heavily used tool for silencing online media outlets. Prosecutorial authorities often use it to bring criminal charges against individuals on the grounds that they have insulted the nation or pose a threat to national security.

But these most recent change will force social media platforms with more than 1 million daily users to appoint a permanent representative in Turkey. That representative will act as the contact person for Turkish authorities, to deal with government complaints against content on their platforms involving possible criminal charges or invasions of privacy.

Companies that fail to appoint a representative will face sanctions.

Turkish authorities also want sites to create a mechanism for removing content within 48 hours of receiving an invasion of privacy complaint or court order. If insulting content is not then immediately removed, sites will be blocked within four hours. Internet providers that fail to communicate government complaints to the responsible party will face heavy fines.

Reporters Without Borders rejects the expansion of Turkey's internet law. It's clear that the aim of the law is to control social media platforms in order to smother growing political unrest. That will also restrict access to independent information, something that is vitally important in a society as highly polarized as Turkey is today.

The expansion of the law comes at a time when online censorship has been stepped up. Back in 2018, Turkish courts blocked access to at least 2,950 news articles and other journalistic content — including research and reports on political corruption, cronyism and human rights and labor abuses. In addition, countless other sources of information have simply been blocked by authorities without court approval.

Turkey's expansion of its internet law confirms what we have been saying all along: Authoritarian regimes are pointing to the precedent set by, among others, Germany's 2017 Network Enforcement Act (NetzDG), a measure to fight hate speech, as justification for passing new laws that tighten their control of social media.

Christian Mihr is the director of Reporters Without Borders Germany, an international NGO engaged in securing press freedom and fighting censorship. Among other things, Mihr concentrates extensively on the situation facing journalists in Turkey.