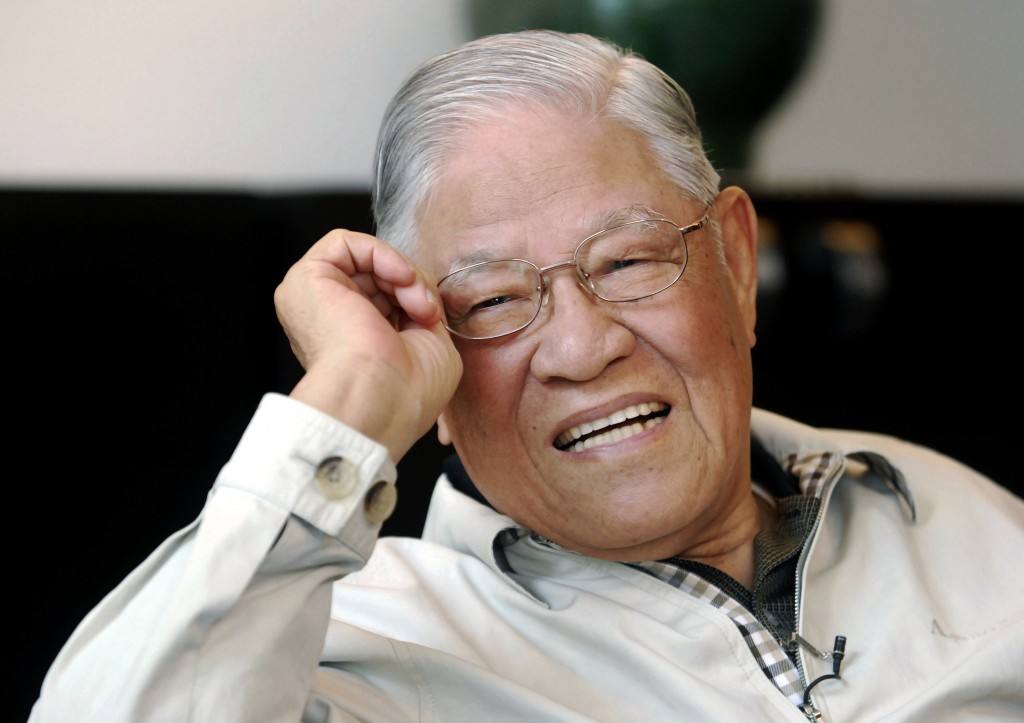 President Tsai Ing-wen (蔡英文) said later on her Facebook page that as the head of state, she expressed her heartfelt condolences and sympathy on behalf of all the people in the nation and has also directed the Presidential Office and relevant government agencies to help with funeral arrangements.

The former president, as the pioneer in his time, had twice pursued overseas studies and contributed what he learned to his home country, Tsai said.

She also praised Lee's contribution to Taiwan's democratization, saying that during his 97 years of life, he had encountered many twists and turns in the history of Taiwan.

His passing represents Taiwan has passed many difficult tests and will turn over a new leaf in its history, Tsai added.

According to Presidential Office Secretary-General Su Jia-chyuan (蘇嘉全), Tsai thought Lee's contribution to Taiwan's democratization was irreplaceable and his passing is a grievous loss to the country.

She also directed relevant government agencies to provide funeral assistance to his family in order to make a memorial service for him solemn, Su said in a statement issued Thursday.

Lee took office as Taiwan's president in 1988. He pushed for the nullification of the Temporary Provisions Against the Communist Rebellion in 1991, constitutional amendments, the complete re-election of the Legislature and direct election of the president. He was therefore dubbed "Mr. Democracy" for ending autocratic rule, Su said.

"Sad at the loss of a senior, a mentor, and a friend. President Lee taught me humility, calm, and endurance. He asked me to let people know what our party stood for, to offer a vision for our country's future, and to improve the people's well-being. Thank you Mr Democracy," he tweeted.

Meanwhile, the office of former President Ma Ying-jeou (馬英九) released a statement expressing Ma's grief over Lee's passing and extending his condolences to the former president's loved ones.

Lee brought progress to both country and party in his roles as president and leader of the Kuomintang (KMT), and countless political figures in Taiwan, including Ma, served under him, the statement continued.

After former President Chiang Ching-kuo (蔣經國) ended martial law and allowed the formation of political parties, Lee promoted direct presidential elections and reform of the National Assembly. His contributions to Taiwan's democratization deserve the respect of all, Ma said.

Although Lee's political views underwent massive changes after he left office, Ma is grateful for all he has given to the country and is confident that he will be given a fair and objective place in history, the statement said.

Lien Chan (連戰), who served as Lee's vice president during his final term, lauded Lee's accomplishments and offered condolences to his family, adding that his legacy would ultimately be for history to judge.

Leaders of several of Taiwan's cities and counties also shared their personal reminiscences of Lee after his death was announced on Thursday.
In a Facebook post, Taoyuan Mayor Tseng Wen-tsan (鄭文燦), of the governing Democratic Progressive Party (DPP), recalled the former president's decision in March 1990 to meet with leaders of the Wild Lily student protest movement, an act which he said had "set the wheels of democracy ... in motion."

DPP Keelung Mayor Lin Yu-chang (林右昌) remembered personal encouragement he had received from Lee as mayor, adding that despite the former president's death, "his spirit will remain."

In Taichung, KMT Mayor Lu Shiow-yen (盧秀燕) noted that a famous quote of Lee's about serving as president "with the people in my heart" had come to serve as a personal motto for countless workers in politics.

Tainan's DPP mayor, Huang Wei-cher (黃偉哲), expressed his "sincere admiration" for Lee, not only for bringing Taiwan's democratization project to a fulfillment, but also for rapidly developing its economy.

Pingtung County Magistrate Pan Men-an (潘孟安), also of the DPP, said Lee was an exemplar of his generation in Taiwan, apparently referring to the development of Lee's political views throughout his life.

Among Taiwan's political parties, the KMT issued a statement recalling Lee's numerous achievements as president, and said his service as KMT chairman had "led the party into another era."

It went on to thank Lee for offering a "life of inspiration," and offering condolences to his family.

The DPP, meanwhile, shared Tsai's remarks on Lee, appending a photo of him on a 1996 Newsweek magazine cover under the headline "Mr. Democracy."

The centrist Taiwan People's Party, meanwhile, asserted that Lee's name would always be connected to democracy in Taiwan.