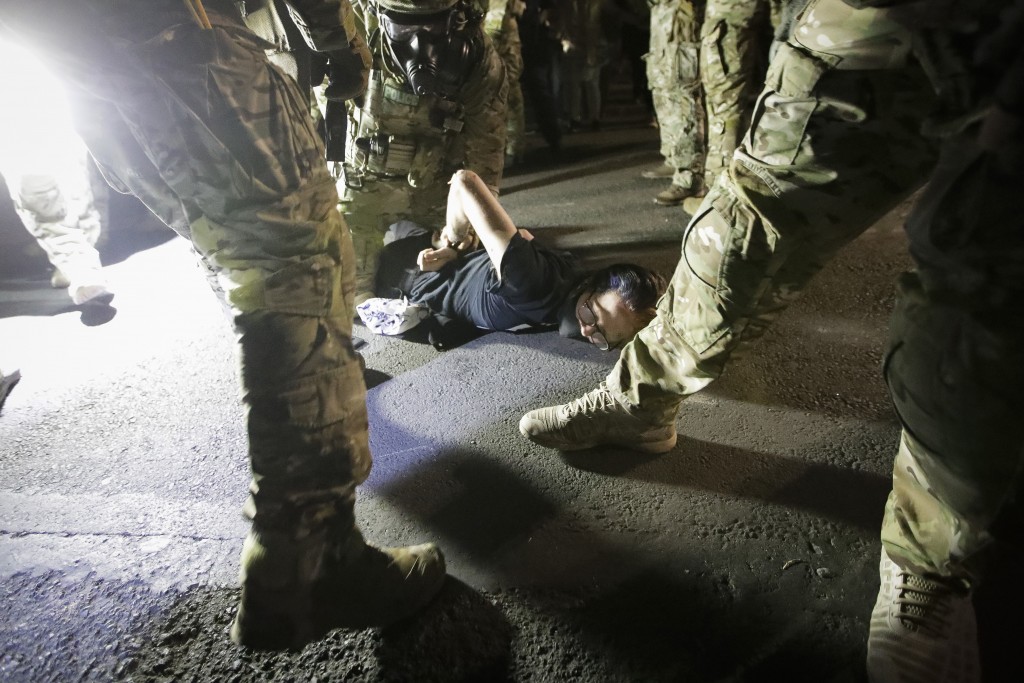 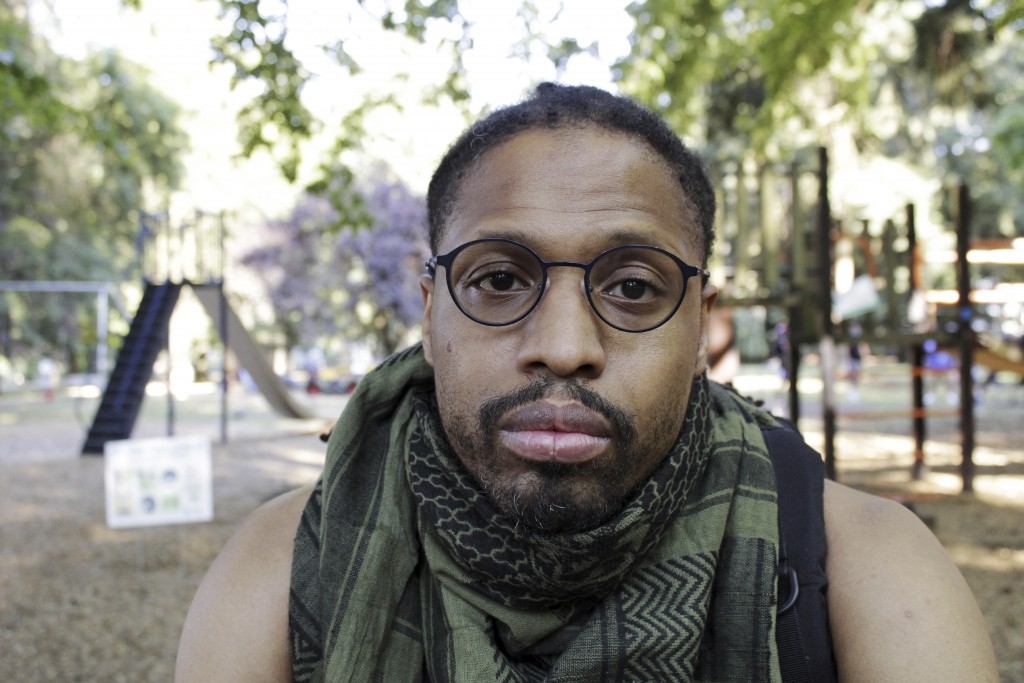 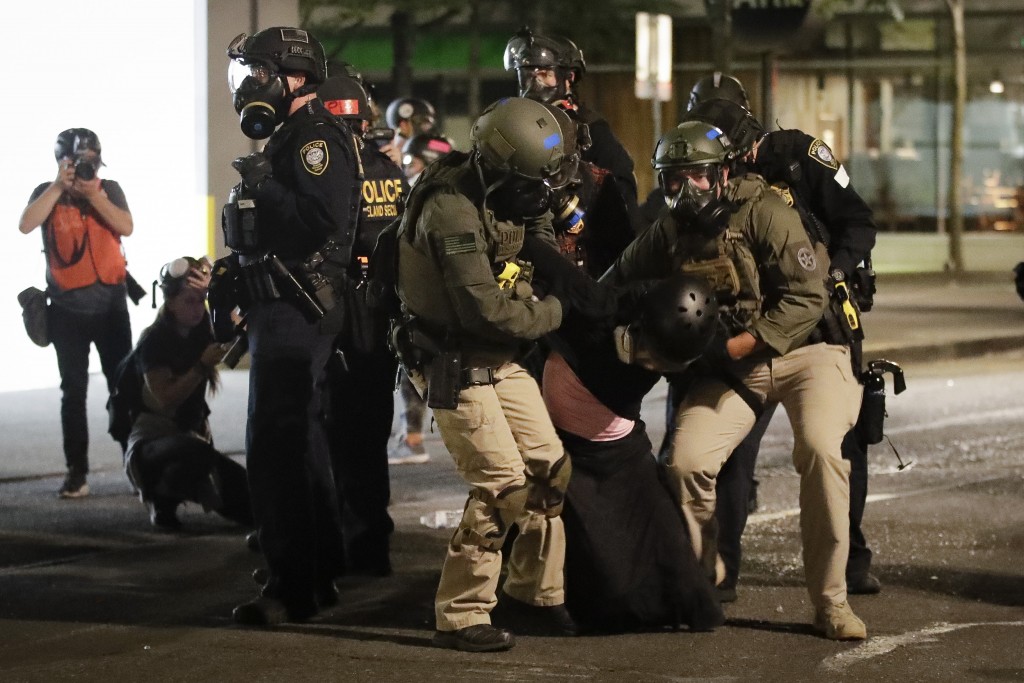 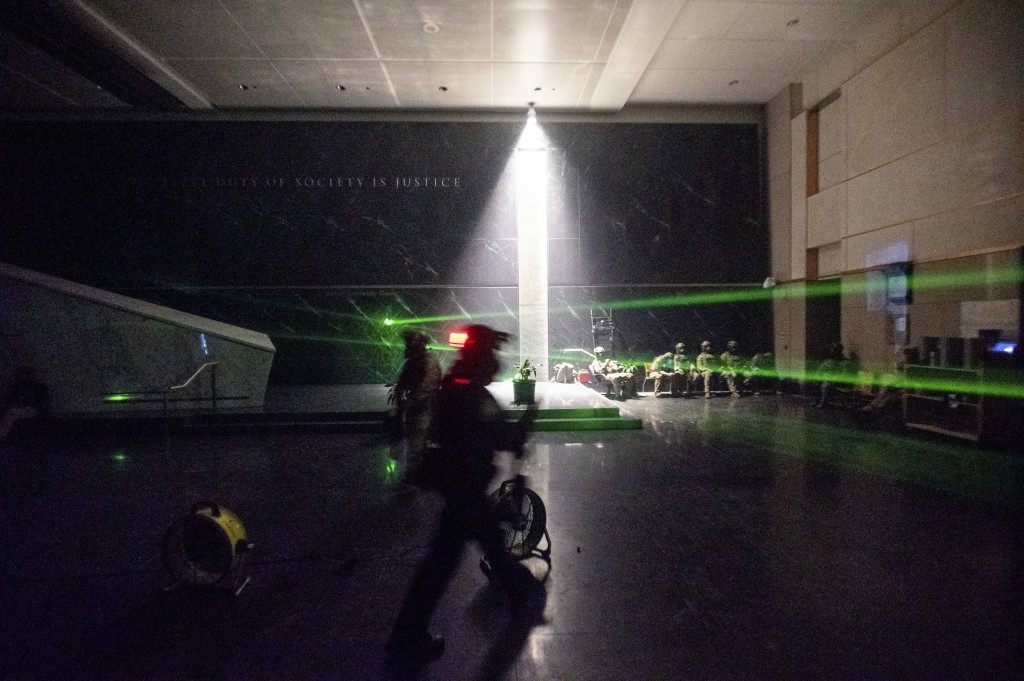 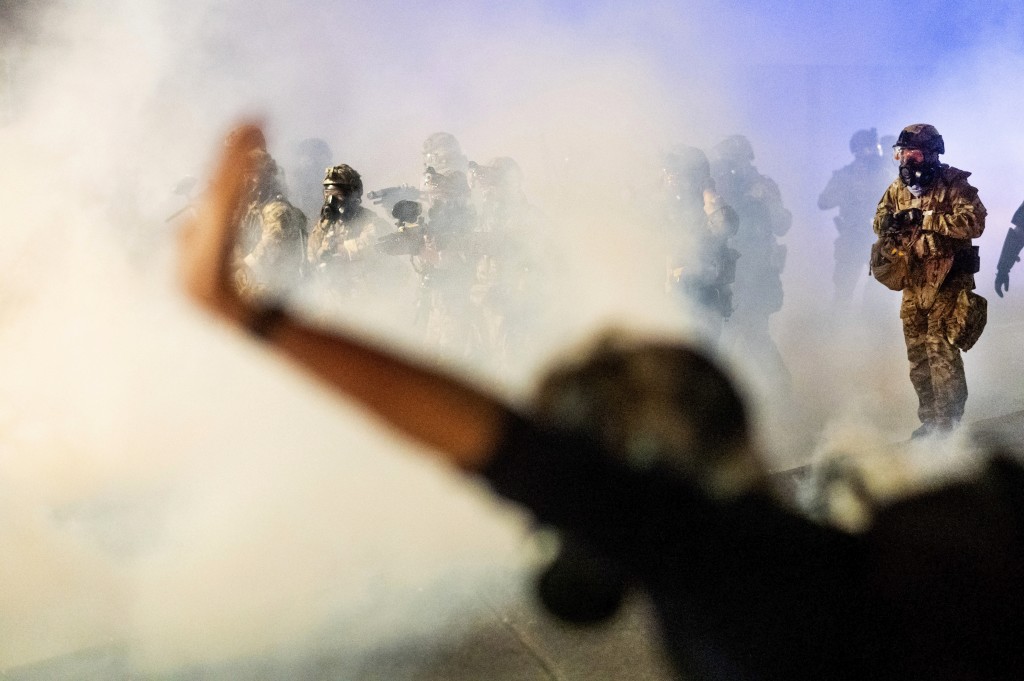 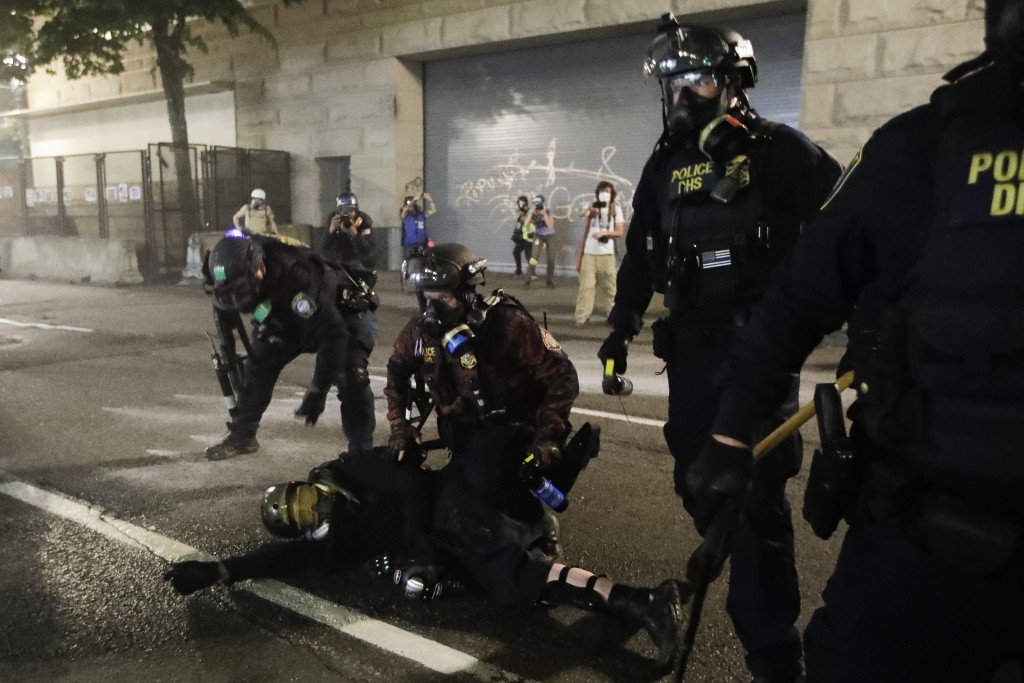 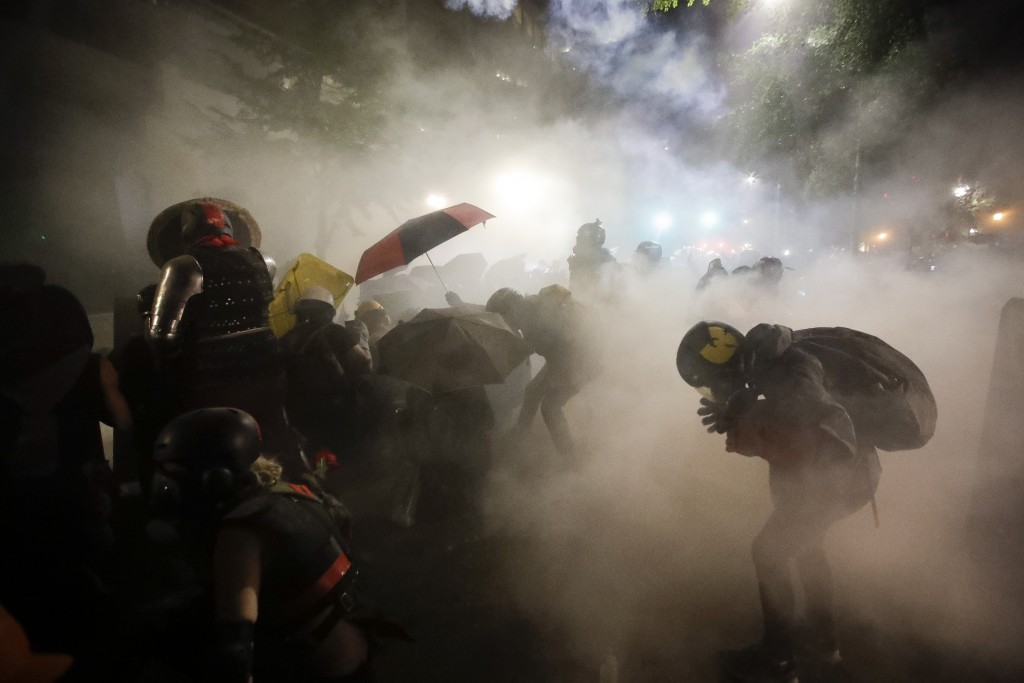 Sheena McFarren was two rows behind a line of police at a protest in Portland, Oregon, when she saw officers pepper-spraying a Black man.

“I said, ‘Hell no,’ so I pulled his backpack back really hard and stepped into the space he was in,” said McFarren, a 34-year-old manager for the Sierra Club who’s white.

Edward Schinzing, 32, was just around the corner on another night. Prosecutors say he and 30 others broke into a building with a jail and courtrooms, destroyed an office and set it ablaze.

Both were arrested. Their disparate circumstances highlight what The Associated Press found in an analysis of more than 200 arrests: even those accused of breaking the law during the liberal city’s nightly rallies don’t neatly fit into President Donald Trump’s depiction of protesters as “anarchists and agitators.”

A review of court documents, social media posts and other public records from people arrested by federal and local authorities since mid-June reveals a group whose motives are as varied as the acts leading to their arrests.

They're Black Lives Matter activists who have been in the streets since George Floyd died at the hands of Minneapolis police in May, groups of self-proclaimed parents using leaf blowers to drive away tear gas and black-clad provocateurs taking advantage of the nightly chaos that's gripped downtown Portland for over two months and led Trump to deploy federal agents in early July.

The AP found that 95% of those arrested by police and federal agents were local. The vast majority have no criminal record in Oregon. Many appear to be college students. Their average age was 28, court records show.

They're mostly charged with misdemeanors like failing to comply with a lawful order, while some face felonies like arson and assault on an officer. Most people have been released, and some have been arrested more than once for similar offenses.

The federal government agreed Wednesday to draw down the number of agents whose presence has swelled the ranks of the protests. Federal forces have drawn more black-clad people accused of setting fires or assaulting officers but also military veterans seeking to lower tensions and a self-titled “Wall of Moms."

“They have acted as an occupying force & brought violence,” Oregon Gov. Kate Brown tweeted of the U.S. officers.

Soon before the announcement, Trump insisted agents wouldn't leave until local authorities “secured their city.” He's spent weeks running Portland through the political playbook he used during the initial wave of nationwide demonstrations after Floyd’s death: painting those on the streets as anarchists and seeking to tie them to Democratic rival Joe Biden.

But AP's analysis shows many of those arrested do not fit the caricature of an anarchist bent on destruction.

Moments before her arrest, police threw McFarren, the Sierra Club manager, to the ground, yanking off her mask and binding her wrists in zip ties. She was released after eight hours in jail and faces charges of disorderly conduct and interfering with police.

McFarren, who lives in Seattle, said she started protesting in her city and in Portland almost nightly after realizing she could do more in the fight for racial justice. Until Floyd's killing, McFarren says she was a “tourist protester.”

“I realized I need to be participating in this legitimately every day," she said. "I need to do this work.”

McFarren said she and her boyfriend, a former Army medic, provide security services and try to act as a “shield" between protesters of color and law enforcement.

Some of those charged with more serious offenses, such as assaulting officers and destroying property, have criminal histories. Most are white, according to court records.

Schinzing, who was photographed burning papers inside the county Justice Center, was ordered detained this week by a federal judge. He faces a felony arson charge, on top of unrelated harassment and assault charges from February, court records show. His court-appointed attorney declined to comment.

“Our federal officers have faced assaults with Molotov cocktails, mortar-style, commercial-grade fireworks, accelerants, IEDs and other violent weapons," Wolf said at a news conference about the withdrawal of federal agents.

Lisa Hay, Oregon's federal public defender, said her office is representing “mothers, college students, lawyers” and others from across the state and country.

“It should concern everyone that there were arrests by unmarked police officers of Oregonians who were asking what’s going on and weren’t being given any answers,” Hay said.

The state sued over those allegations, which the Trump administration denies, but a judge tossed the case.

Some Black activists say the political fight distracts from the focus on combating racist policing.

Mac Smiff, a 39-year-old father and analyst for a utility company, was arrested on June 6 and charged with interfering with a peace officer. He’s confident the charge will be dismissed, saying he got caught up as police swept through downtown after a protest.

A veteran activist, Smiff took to the streets after seeing a prominent politician talking about reducing funding for police on TV. He thought the wave of rallies following Floyd's death seemed different, more focused, but said Trump deriding protesters as violent extremists is a familiar strategy.

“If you make the blame indiscriminate, then you can make the response indiscriminate. That’s just a tactic to justify using escalating force and chemical weapons against us,” Smiff said. “I own my house. I’m a professional human being. I’m out here fighting against corruption and police brutality. And the response is I’m a terrorist? That’s laughable at best.”

He welcomed the news that the federal presence in Portland would be winding down, saying the agents were a “distraction."

“That was a side mission,” he said. “We came out here to defund the police.”