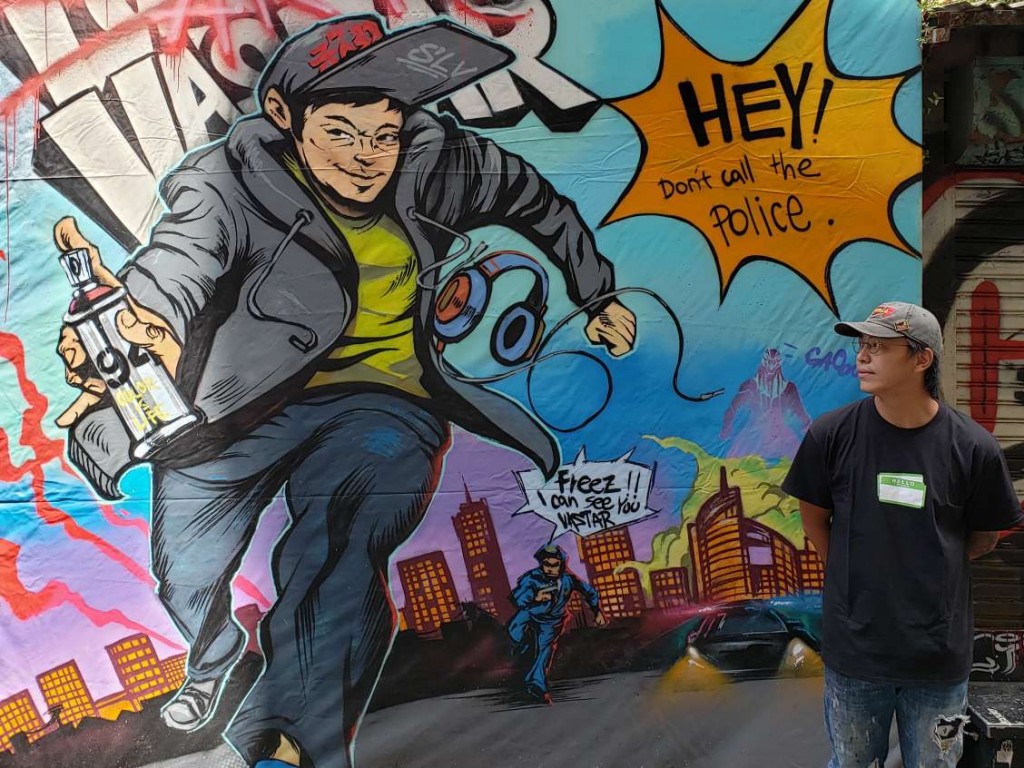 TAIPEI (Taiwan News) — At the end of Taipei's Wuchang Street, which is known for its concentration of movie theaters, alert visitors will quickly become aware that they have roamed into another kind of art district, one devoted to graffiti — and Fu Hsing-han (傅星翰) and his friends have painted a good chunk of it.

Fu, who is in his early 30s and tags under the name Vastar, has the demeanor of someone who takes nothing for granted — certainly not the ability to do what he loves for a living — let alone success. A quick look around his studio, with its sketches, handmade toys, and assorted works-in-progress, leaves an overwhelming impression that this is a guy who knows how to keep busy.

The English novelist Martin Amis once wrote, "You get the feeling that childhood does not last as long as it used to. Innocence gets harder to hold on to as the world gets older, as it accumulates more experience, more mileage, and more blood on the tracks."

Somehow Fu seems to have delayed boarding that particular train, and yet the man's innocence fits his willfulness like a velvet glove cast in iron. Tremendous seriousness can come in many forms.

The road has not been especially easy for the artist. When he was 18, tragic circumstances forced him to abandon his studies after high school and go to work at a funeral home applying makeup to corpses; this went on for seven years.

For the better part of the last decade, however, things have been brighter. Now when he is not busy spray-painting murals, designing toys, or working on his latest project — a manga — he is working with Warner Brothers, Converse, Jay Chou (周杰倫), and others.

There is also the matter of the Street Fighter-style videogames. (He keeps a proper arcade machine in the back of his studio — right next to his e-sports competition awards.)

Recently, he has put his design skills to work for the Japanese videogame "Yakuza" (人中之龍), which is an action-adventure franchise dating back 15 years. When he speaks about this job, there is palpable excitement, but it is also apparent that he would prefer to be tinkering in his studio.

One of his latest studio creations resembles the kind of 90s dollhouse case that unfolds to reveal a small dramatic set, in this instance a skull cave full of winding stairs and secret passageways with figurines — "G.I. Joe" meets "Phantom of the Opera." Mixed up in the jumble of models is a caricature of the graffiti artist himself, his frame coiled, his aerosol can held out, as if to say, "Stay back, pigs!"

Nowadays in Taipei, just as in many other parts of the world, graffiti is more or less state-sanctioned art, at least in certain parts of town. The allure remains in that it was never just about breaking the law — as it turns out, 15-meter murals on the sides of buildings will always have that sublime cool, regardless of anything political.

The primary inspiration Fu cites in the world of graffiti is Taiwanese artist Colasa; the two artists both belong to the collective City Marx. Colasa's murals tend toward the intense use of a single color with tints and shades, often with a ghostly bleed that veers into soft focus at times — very unlike Fu's deliberate line work, wild colors, and playful choice of subject matter.

"When I saw his work, he had no frame and no limits," Fu said, which is a statement that could easily be said of the speaker himself.

Another muse is the traditionalist-cum-modernist calligrapher and landscape artist Chang Dai-chien (張大千), one of the foremost Chinese artists of the twentieth century, whose dazzling and roguish career spanned decades and continents before he settled in Taiwan in his final years.

"When I was a kid, we would, like most Asian students, have to study calligraphy. His work, Chang, it just exceeded my imagination. It broke the bounds of our little exercise books, a lot like graffiti."

While Fu did not grow up in warlord-ravaged China like Chang, there is something Dickensian and narratively satisfying about the graffiti artist. He is, unlike so many first-class painters of his generation, not unto the manner born; he managed to claw his way into the studio, all the while retaining the smile on his face as if it had never occurred to him to feel otherwise.

When asked about the lessons that his road-less-traveled approach may offer a young aspirant, he is characteristically nonchalant: "If there is something you love, something you're really excited about, no one should need to compel you. When you bump into obstacles, turn them into fuel."

To view the work of Fu Hsing-han and his contemporaries there is only one method — and that would be to visit the backstreets near Wuchang Street in the Ximending District of Taipei. The next best option would be to take a tour through Google Street Views.