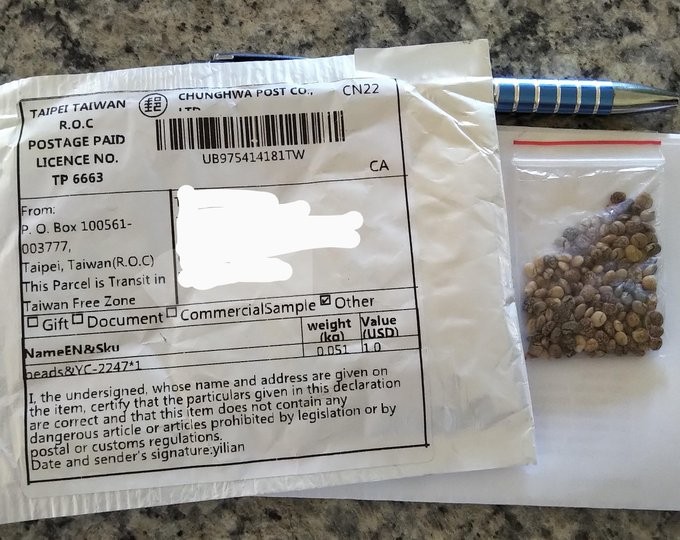 TAIPEI (Taiwan News) — An unsolicited parcel of seeds labeled as being from Taiwan and sent to Canada was transshipped through Taiwan from a third country, according to Chunghwa Post Co. (中華郵政).

On Wednesday (July 29), the Ontario Provincial Police advised residents not to plant or dispose of any foreign seeds received in the mail from China or Taiwan after a report of a parcel of seeds labeled "Taiwan (R.O.C.)."

If you receive an unsolicited shipment of foreign seeds in the mail from China or Taiwan DO NOT plant or dispose of them. Call the Canadian Food Inspection Agency (CFIA) at 519 691-1306 or 1 800 442-2342. Unsolicited seeds could be invasive & threaten our environment. pic.twitter.com/n5hvlFS1W8

Taiwan's state-run Chunghwa Post, the courier shown on the shipping label, responded to the tweet by saying the parcel had been transshipped from a third country through a free trade zone and handled by the company. Chunghwa Post said the shipping of seeds is forbidden and that the sender will be fined NT$100,000 (US$3,414) for violating Taiwanese law.

When asked whether the parcel originated from China, the sender reportedly declined to answer, citing trade secrets, but said they will terminate their partnership with the party.

After reports in multiple U.S. states of unordered shipments of seeds that appear to be from China, a woman in Taiwan claimed she had received a mysterious package of potting soil from China and has reported it to the authorities for further investigation. According to Taiwanese law, importing soil is also prohibited, as it might contain pests that could wreak ecological havoc in the country.