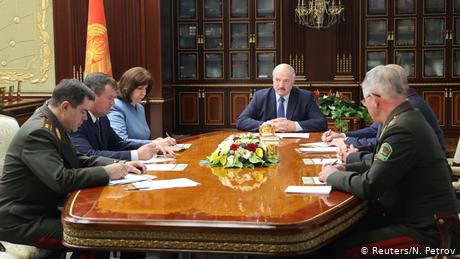 Security officials in Belarus on Wednesday arrested 32 Russians alleged to be plotting to destabilize the country ahead of August elections, state media in Belarus said Wednesday, citing law enforcement officials.

"Thirty two militants from foreign private military company Wagner were detained" near the capital Minsk, state news agency Belta said. Another Russian citizen had been detained at a separate location, it added.

The Wagner group, a secretive private military firm, is believed to be controlled by an ally of Russian President Vladimir Putin. The group is said to promote Moscow's interests in Ukraine, Syria, and Libya.

Belta said the authorities had information about the arrival of more than 200 militants in Belarus, whose aim is "to destabilize the situation during the election campaign."

The state news agency did not explain where the remaining suspected militants were.

The announcement comes amid the backdrop of a contentious presidential election campaign, and barely a day after President Alexander Lukashenko claimed to have had and recovered from an asymptomatic bout of coronavirus.

According to the report, the men were staying at one of the country's health resorts, where they "carefully studied" the area.

Belta said they had been wearing "military-style clothing" and were carrying heavy cases.

The alleged militants unintentionally revealed themselves, Belta reported, because unlike ordinary Russian tourists, they did not drink alcohol.

"They did not consume alcohol or visit entertainment venues, they kept to themselves in order not to attract attention," the news agency said.

The state television channel showed several Russian passports allegedly belonging to the detainees along with packets of condoms and a paper with Arabic script.

The arrests took place less than two weeks before a tense presidential election scheduled for August 9. President Alexander Lukashenko, 65, is seeking a sixth term amid growing discontent over his policies.

The strongman has accused some of his critics of being controlled by Moscow, though he has stopped short of directly blaming Moscow.

Moscow and Minsk enjoy a close political and economic relationship. However, Lukashenko has recently rejected the prospect of an outright unification with Russia.

Last month, he accused Moscow of trying to discredit him, which Russia has denied.

In the past, Belarus has repeatedly exposed alleged foreign plots to interfere with the ex-Soviet country's major elections. This is the first time key ally Russia has been the target of such allegations.

Following the arrests, Lukashenko demanded Moscow provide an explanation for the alleged militants.

"It is necessary to immediately turn to appropriate Russian structures so that they explain what is going on," Lukashenko said at an emergency meeting.

Lukashenko said in televised remarks that he did not intend to "smear" ally Moscow but that "if they are guilty, it's necessary to emerge out of this situation with dignity.".

Moscow did not immediately comment on the situation. The Russian embassy in Belarus originally said on Twitter that the government of Belarus had not notified it about the detention of Russian nationals, but later tweeted that it had been informed that 32 Russians were arrested.