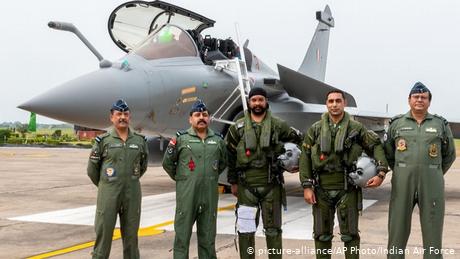 India received on Wednesday the first five Rafale fighter jets it obtained in a multi-billion-dollar deal with France.

It comes at a time of tensions between India and China over the frontier territory of Ladakh, where a skirmish in June that included hand-to-hand combat between soldiers of both countries left 20 Indians dead.

India has bought a total of 36 French Rafale fighters in a deal estimated to be worth $9.4 billion. They are all scheduled to be delivered by the end of 2021.

The Indian government heralded the arrival of the planes, although police and soldiers closed roads leading to the base, banned photography and enforced restrictions on gatherings of more than four people in the vicinity.

Security was tight around Ambala air base in Haryana state, where the jets arrived. A water-cannon guard of honor greeted the planes when they landed.

Indian Defense Minister Rajnath Singh also celebrated the jets, but sent a veiled threat that many say referred to China.

"If anyone should be worried about or critical about this new capability ... it should be those who want to threaten our territorial integrity,'' Singh wrote on Twitter.

Leader of the opposition Rahul Gandhi congratulated the Indian Air Force on receiving the new fighter jets but raised a series of questions on the cost and number of jets purchased.

In the recent years, India has become the world's biggest arms importer, as it embarks on a modernization of its military. On July 2, India's defense ministry also approved the purchase of 21 Russian MiG-29 and 12 Sukhoi Su-30MKI fighter aircraft costing $2.43 billion to replace obsolete Soviet-era weapons.

Indian and Chinese forces have been in a six-week-long standoff on their Himalayan border since the incident that led to the Indian deaths. China also suffered casualties, but has not revealed the figures.

Both sides have blamed each other for the clash and have also positioned thousands of troops there, even as they pursue talks that they say aim to ease the tensions.