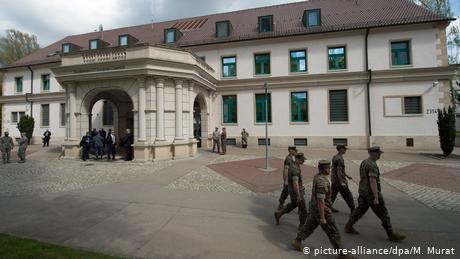 US Defense Secretary Mark Esper confirmed on Wednesday that troops would be pulled and relocated from Germany. The move is set to be the largest shake-up of troops in Germany since the Cold War.

Earlier this month, the Pentagon said that President Donald Trump had approved a plan to withdraw in the region of 9,500 US troops from Germany. But in Wednesday's announcement, the first time the US set out concrete proposals on its "European Strategic Force Posture Review," Esper tentatively put the number at 11,800.

Under the plan, the US will send home some 6,400 forces and relocate 5,400 out of Germany and to other European countries in Europe, the US Defense Department said. Roughly 25,000 troops are set to remain in Germany.

The reassignment envisages troops moving to Italy and Belgium, but some could also go to Poland and the Baltic states, if Warsaw agrees to an accord that the two sides have been working on, Esper said. The defense chief added the troop redeployment would cost in the "single digit'' billions of dollars.

Esper said that the troop reassignments were part of a larger plan to update US strategy against Russia. "We are following the boundary east, where our newest allies are," the Defense Secretary said.

Esper did not explicitly say whether the decision to move troops had to do with President Trump's comments regarding Germany. Trump has often criticized the European ally for not investing enough in defense and being "delinquent" in its NATO payments.

But Esper did back the president's premise. "To give President Trump credit, we have seen an increase in defense spending by NATO," the Defense Secretary said of White House efforts to get more countries to invest in NATO.

Earlier on Wednesday, Trump said the European ally "owes billions and billions of dollars to NATO."

"Now Germany is saying it's bad for their economy. Well, it's good for our economy," Trump said, referring to the consequences of the partial withdrawal. "They've been taking advantage of us for many years."

"We don't want to be the suckers any more," the US president said, adding that he could "rethink" the plan "if they start paying their bills."

Esper backed Trump's assertion, saying that Germany was a "rich country" and that it "can and should pay more for its defense."

Read more: US military in Germany: What you need to know

Last week, the state premiers of Bavaria, Baden-Württemberg, Hesse and Rheinland-Palatinate wrote to members of the US Senate and Congress pleading for a stop to the plan, saying the troops formed "the backbone of US presence in Europe and NATO's ability to act."

"We therefore ask you to support us as we strive not to sever the bond of friendship but to strengthen it, and to secure the US presence in Germany and Europe in the future," the German politicians said.

Several members of Trump's own party have also criticized the plan and sought to reassure ties with Germany. "At a time when the US and our European allies must continue to stand hand in hand in deterring malign influences, it is in our national security interest, as well as in the interest of our allies and partners, to continue our presence in Germany," Republican Senator from Fliorida Marco Rubio said in June.