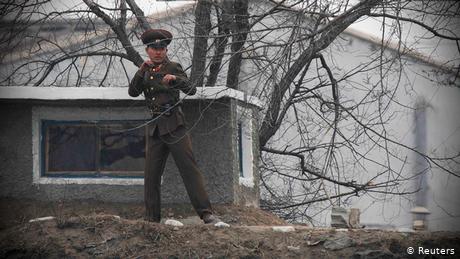 The United Nations has released a report that focuses on human rights abuses perpetrated against women in North Korea, recounting the ordeal of dozens of women at the hands of state security officers and police.

The 72-page report, released by the Office of the High Commissioner for Human Rights simultaneously in Seoul and Geneva, details a wide range of rights abuses in North Korea, including detention in "inhumane conditions," deprivation of food, torture, forced labor and violence, including sexual assaults.

All of the more than 100 women interviewed over a period of 10 years from 2009 reported hunger to the point of malnutrition. Many of them witnessed prison officials beating pregnant detainees so severely that they aborted their unborn child. Others saw guards rip new-born children from their mothers' arms and kill them.

Calls by DW to the North Korea permanent mission to the UN in New York for a reaction to the report were not answered.

Before its release, the UN report was presented to North Korean officials seeking comments. Pyongyang has categorically denied the details in the study and has in the past accused the UN of falsifying its reports on the North, charging the organization with being a tool of the United States.

In December, after the UN General Assembly condemned the North's "long-standing and ongoing" human rights violations in an annual resolution supported by dozens of member states, Pyongyang warned that the US would "pay dearly" for criticizing its rights record.

The UN office was set up in Seoul in June 2015 with the specific aim of documenting human rights abuses in North Korea and, at an appropriate time in the future, of prosecuting those accused of crimes against humanity. For this new report, investigators at the office interviewed women who had fled North Korea but had been subsequently detained, primarily in China, and forcibly repatriated and punished. The interviews took place after they were able to escape for a second time and find sanctuary in South Korea.

According to the report, women accounted for slightly more than 80% of the 1,047 people who managed to reach South Korea in 2019 after defecting from the North. It is not known how many people defected over the course of the year as many have been forced to stay in China, even though they are likely to be repatriated if they are caught by the authorities.

The women interviewed by the UN said they crossed the border in search of food or to engage in unofficial trading to earn money and often planned to return to their homeland. Others relied on gangs that offered, for a price, to get people over the border into China but then sold them to Chinese men looking for a bride or into the sex industry or other menial and low-paid jobs.

North Korean women detained in China are invariably repatriated to the North, with those who are able to convince their interrogators from the Ministry of State Security that they were merely trying to make some money to survive, usually given a sentence of around one year in prison. Still, they reported facing frequent beatings as their abusers try to determine why they went abroad, who they met and their longer-term aims.

For defectors who spent a long time abroad before being captured, were in contact with Christian groups, or are suspected of planning to travel on to South Korea — considered a political crime — the punishments are much more severe, the report points out. Those found guilty of this form of "treason" are invariably sent to one of the North's five "kwanliso," or political prison camps, for an indeterminate period of time. Ominously, the UN investigators have not been able to find a single survivor of a political prison to interview.

"I was beaten with a club by a preliminary investigation office and was kicked by the officer," one woman interviewed for the study said. "If someone is found to have gone to a South Korean church while staying in China, they are dead. I therefore tried hard not to reveal my life in China. I was beaten to a level that my rib was broken. I still feel the pain."

The women recounted being held in inhumane, overcrowded and unsanitary conditions, with little or no access to fresh air or daylight. They were repeatedly subjected to torture, beatings and individual or collective punishment for failing to complete the hard labor assigned to them.

"During my time in prison, about five or six people died," another woman said. "Most of them died due to malnutrition."

None of the women interviewed for the project were identified out of concern for their safety or the well-being of their relatives still in the North.

"It is heartbreaking to read these stories of women who fled their country looking to make ends meet, but who ended up being punished," said Michelle Bachelet, UN high commissioner for human rights, in a statement.

"These are women who have often been the victims of exploitation and trafficking. They should be taken care of, not detained and subjected to further human rights violations," Bachelet added. "These women have a right to justice, truth and reparation."

The report calls on the North Korean government to halt its systematic abuse of women held in detention and to bring its detention system into line with international norms and standards. It also urges other states to respect the principle of not repatriating individuals who are likely to have their human rights violated and to participate in any investigations into crimes against humanity.

In conclusion, the report says the UN Human Rights Office will continue to gather evidence "to support a process of criminal accountability, wherever and whenever possible."