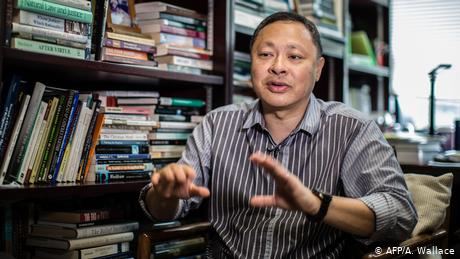 A law professor and leading activist in Hong Kong's pro-democracy movement vowed on Wednesday to appeal against his sacking from a top university in the institution's apparent deference to Beijing.

The university has so far given no reasons for its decision, but pro-democracy activists are seeing it as another example of Beijing's growing influence in the semi-autonomous city.

A statement issued by the Chinese government's liaison office in Hong Kong said that Tai's removal was "a punishment for evil doing" and that it upheld "the overall interests of Hong Kong, meets public expectations and safeguards social justice."

In a Facebook post, Tai said he would consider launching a judicial review of the university's decision. He also wrote to the city's leader, Carrie Lam, asking her to intervene.

A political science professor at the university, Joseph Chan, said on his Facebook page that the decision meant that the institution had "sacrificed its reputation" and could no longer "hold its head high in the international academic community."

Tai was jailed last year for his involvement in mass pro-democracy protests in 2014 but has been out on bail.

His sacking comes shortly after China passed a sweeping new national security law that critics see as a bid to repress all dissent in Hong Kong, which has enjoyed a certain degree of autonomy since being handed back to Beijing by Britain in 1997. Beijing has called for patriotic education and the new controversial law has already led to some books being removed from libraries and schools.

The law, which Beijing alleges is necessary to protect national security, was prompted by further protests last year against proposed legislation that would have seen criminal suspects extradited to the Chinese mainland to face trial. Even after the proposal was withdrawn, sometimes violent protests continued amid calls for democratic changes and an investigation into alleged police abuses.

China has previously said it wants to overhaul schools and universities in Hong Kong, which it sees as playing a role in fomenting such protests.