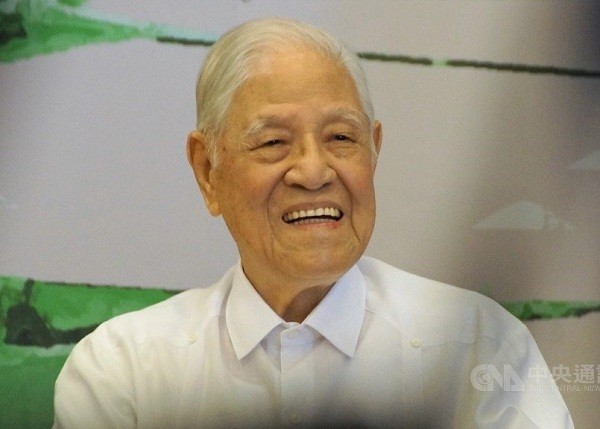 Lee served as head of state and as chairman of the Kuomintang (KMT) from 1988 until 2000, a period marked by democratization and liberalization but also by tension with China.

The former president had been staying at the Veterans General Hospital in Taipei since February to undergo treatment for pneumonia, which was reportedly discovered after he coughed while drinking a glass of milk. His wife, Tseng Wen-hui (曾文惠), 94, and President Tsai Ing-wen (蔡英文) visited him at the hospital on Wednesday (July 29).

As a skilled technocrat, Lee was appointed mayor of Taipei in 1978 and served for three years, addressing water supply and irrigation problems.

President Chiang Ching-kuo (蔣經國) chose Lee as his vice president for his second six-year term, beginning in 1984. The selection was seen as part of Chiang’s policy of promoting native Taiwanese instead of officials from the minority of “mainlander Chinese” who had fled communism in the late 1940s.

When Chiang died in Jan. 1988, Lee automatically became president but also overcame conservative opposition within the KMT to take over the chairmanship with the help of party official James Soong (宋楚瑜), who would serve as his major confidant until a falling out in the late 1990s.

In 1990 Lee was elected by the largely rubber-stamp National Assembly for a six-year term as president, but massive protests by students led him to set reforms in motion. Constitutional amendments resulted in direct elections for the presidency and in the full re-election of the Legislative Yuan.

The reforms, which saw a move away from the KMT’s “One China” orthodoxy, as well as Lee’s 1995 visit to Cornell, enraged China, which saw Lee as an independence supporter.

In the run-up to the first-ever direct presidential election scheduled for March 23, 1996, China fired missiles close to the island, apparently to intimidate Taiwanese citizens not to vote for Lee; however, he won in a landslide with 54 percent, more than double the number of votes for his closest challenger. Newsweek put him on the cover of its Asian edition with the moniker “Mr. Democracy.”

Lee was ousted from the party leadership, with his supporters later founding a separate party, the Taiwan Solidarity Union (TSU). While no longer active in electoral politics, Lee still regularly commented on major events and made frequent trips to Japan as far as his health allowed him.