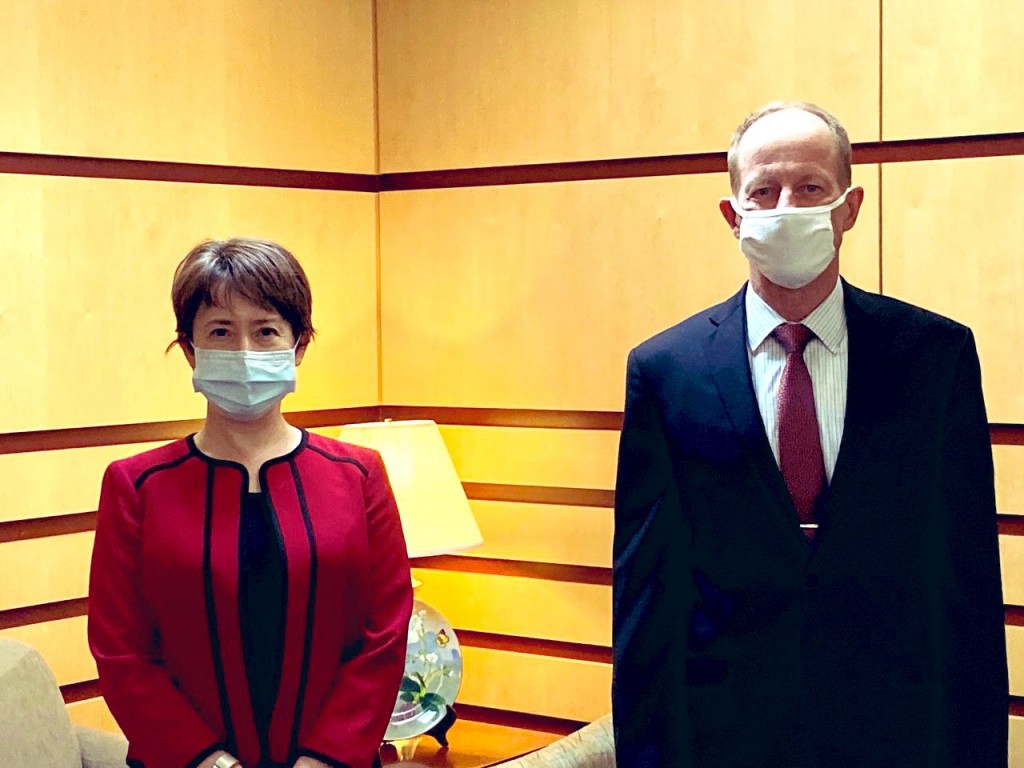 TAIPEI (Taiwan News) — Taiwan’s envoy to the U.S. Hsiao Bi-khim (蕭美琴) met with David Stilwell, assistant secretary of state for the Bureau of East Asian and Pacific Affairs (EAP), on Monday (July 27) to discuss furthering ties between the two countries.

“Taiwan is a force for good and a reliable partner in the world,” said the Taiwanese representative on social media. “I look forward to working with the EAP in advancing the strong relationship,” she said.

Thank you for the warm welcome. I look forward to working with @USAsiaPacific in advancing the strong relationship. https://t.co/jBTdUoYAYr

Hsiao earlier confirmed that the meeting she made just a few days after assuming the position took place in the offices of the EAP — a situation that is considered rare, as the U.S. government has prevented the reception of Taiwanese ambassadors in a State Department facility since the two countries cut ties in 1979. This practice may now have gone into eclipse following Hsiao's visit and the visit of Taiwan's former envoy to the U.S. Stanley Kao (高碩泰) earlier this month.

Shortly after Hsiao’s meeting with Stilwell surfaced, the EAP took to Twitter to congratulate Hsiao on taking charge of Taiwan’s representative office in the U.S., officially called the Taipei Economic and Cultural Representative Office in the United States (TECRO). “The U.S.-Taiwan relationship has never been stronger,” said the EAP, adding that both sides had a fruitful discussion on “Taiwan’s success in addressing #COVID19 and opportunities to strengthen our economic and people-to-people ties.”

Honored to welcome Bi-khim Hsiao to the United States to lead @TECRO_USA. The U.S.-Taiwan relationship has never been stronger. Great discussion on Taiwan’s success in addressing #COVID19 and opportunities to strengthen our economic and people-to-people ties.

TECRO on Tuesday (July 28) shared a photo of Hsiao and Stilwell via Twitter. "Taiwan is committed to expanding our economic, security, cultural & educational ties with the U.S. in the years ahead,” said TECRO.

Representative @bikhim
looks forward to working with Assistant Secretary David Stilwell & his team @USAsiaPacific for an even closer #Taiwan-#US partnership. Taiwan is committed to expanding our economic, security, cultural & educational ties with the US in the years ahead. pic.twitter.com/l7ny6HGMiR

Representative Hsiao visited the assistant secretary of state on Monday, said Joanne Ou (歐江安), spokesperson for the Ministry of Foreign Affairs (MOFA) during a press briefing on Tuesday. She said the two exchanged ideas about issues of mutual concern to both countries but declined to provide further details.

Having been sworn in as the first female Taiwanese representative to the U.S. on July 21, Hsiao assumed her post in Washington on July 23. As President Tsai Ing-wen (蔡英文)'s foreign policy has tilted heavily toward the U.S. as opposed to China, Hsiao, being one of the politicians most trusted by the president, has said that work concerning Taiwan-U.S. ties leaves no room for failure.