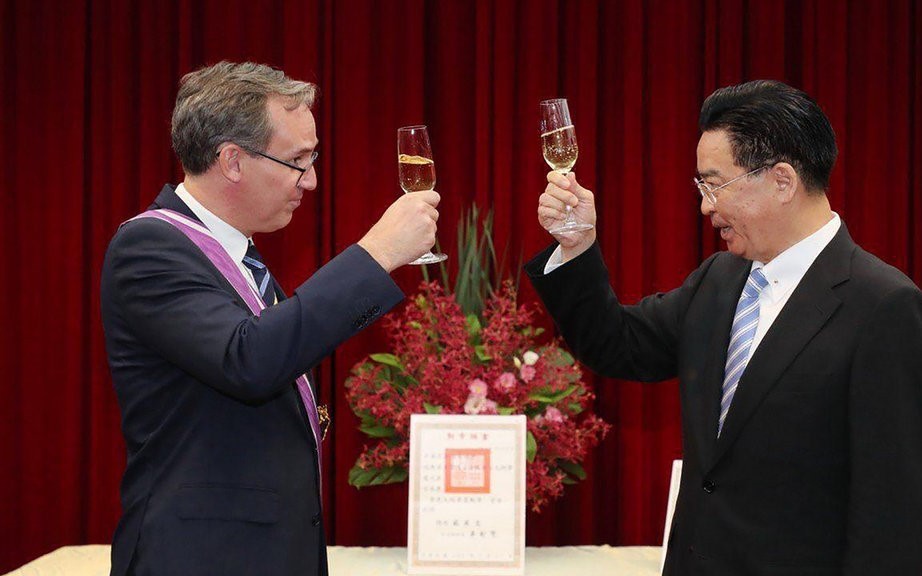 On Monday afternoon, Jevrell, the outgoing envoy of the Swedish Trade and Invest Council in Taipei, was presented with the prestigious medal in recognition of his efforts to improve bilateral relations between Taiwan and Sweden, according to a MOFA press release.

Wu said that during Jevrell's two years at the post, he had actively promoted bilateral exchanges and achieved remarkable results. For example, he had helped Sweden become the first European country to join the Global Cooperation and Training Framework in order to work with Taiwan and other partners to promote international cooperation and support the island nation’s international participation, Wu pointed out.

Wu further stated that because of the Swedish representative’s hard work, bilateral relations between the two nations will continue to grow in the future.

At the award ceremony, Jevrell expressed that it was an honor to have been awarded such a high decoration and thanked Wu, MOFA, various ministries and committees of the Taiwanese government, and friends in Taiwan for their support and assistance during his tenure, according to MOFA. Jevrell emphasized that cooperation between Taiwan and Sweden on the economy, trade, education, and science and technology has grown substantially since last year, but it is the common values of freedom, democracy, and human rights that truly link the countries together.

MOFA mentioned that the Swede also praised Taiwan as a shining example of democracy in Asia and emphasized that the Nordic country will continue to work with Taiwan to maintain their shared values. Sweden will always be Taiwan's friend, he remarked.

Jevrell has served as Sweden’s representative to Taiwan since September 2018 and is scheduled to leave office next month.