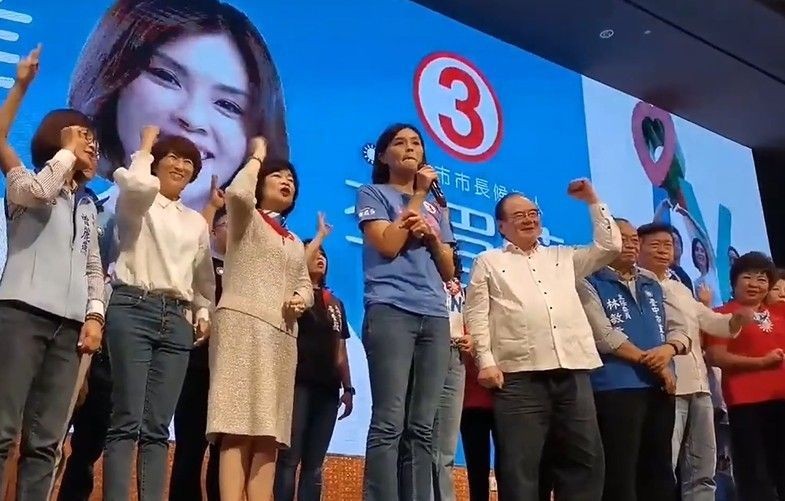 TAIPEI (Taiwan News) — Female politicians in Taiwan reacted angrily after the mother-in-law of a politician in southern Taiwan made a joke about her breast size.

After a number of leaders spoke on Li's behalf, the host called on Li's mother-in-law Tsai Mei-hung (蔡梅紅) to take the stage. Tsai then revealed Li's sorrow at having a miscarriage and how she cut her hair and donated it to children suffering from cancer, which resulted in many thank you letters and words of praise for her daughter-in-law.

Suddenly, Tsai grabbed the microphone and swore that everything she said was true. She then vowed that if she lied her "breasts would shrink," prompting laughter from the audience.

She added that "this is something I don't want." Li, who was to her left, grimaced awkwardly as the crowd started to buzz about the controversial comment.

That evening on her Facebook page, New Power Party (NPP) Taipei City Councilor Huang Yu-fen (黃郁芬) wrote that a woman's role in her private life has no bearing on her ability to engage in public affairs and her qualifications as a leader.

Huang then stated that Tsai's oath implies that smaller breasts are a kind of punishment and this is not only the objectification of women's bodies but also "blatant discrimination and blatant malice." She lamented that hearing such remarks in public shows that sex education in Taiwan "still has a long way to go."

Later that evening, NPP Legislator Claire Wang (王婉諭) on her Facebook page also criticized the comment under a post titled "Women's bodies should not be anyone's bargaining chip in the election." Wang wrote that she at first thought that the speech was an internet spoof, but later realized that it was a real speech given that day in Kaohsiung.

She wrote that despite actively educating the next generation to protect their bodies, other adults would "use their breasts as a political bargaining chip." She also lamented that "This is the worst example of sex education in Taiwan."

Wang wrote that there are too many aesthetic standards based on male attitudes in mainstream society. She continued that when she was young, she worried that a difference in breast size would lead to ridicule, but later learned that breast size does not affect its function and "everyone's body is unique."

The legislator wrote that she was confused and puzzled by Tsai's speech. "Why should a woman embarrass other women like this?"

"Smaller breasts should not be punishment ... let alone be used as a bargaining chip for election bets," stated Huang. She then called for a return to a discussion of core issues: "Is it really so difficult to return the election campaign to a fundamental discussion of policy issues? We have had enough of these kinds of meaningless and vulgar jokes."