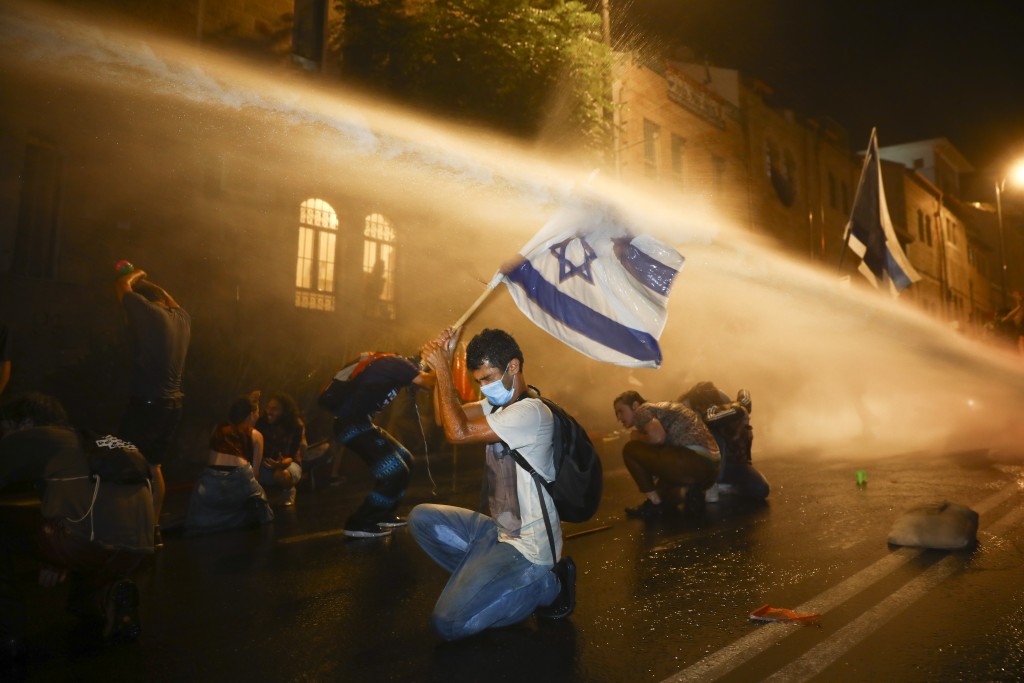 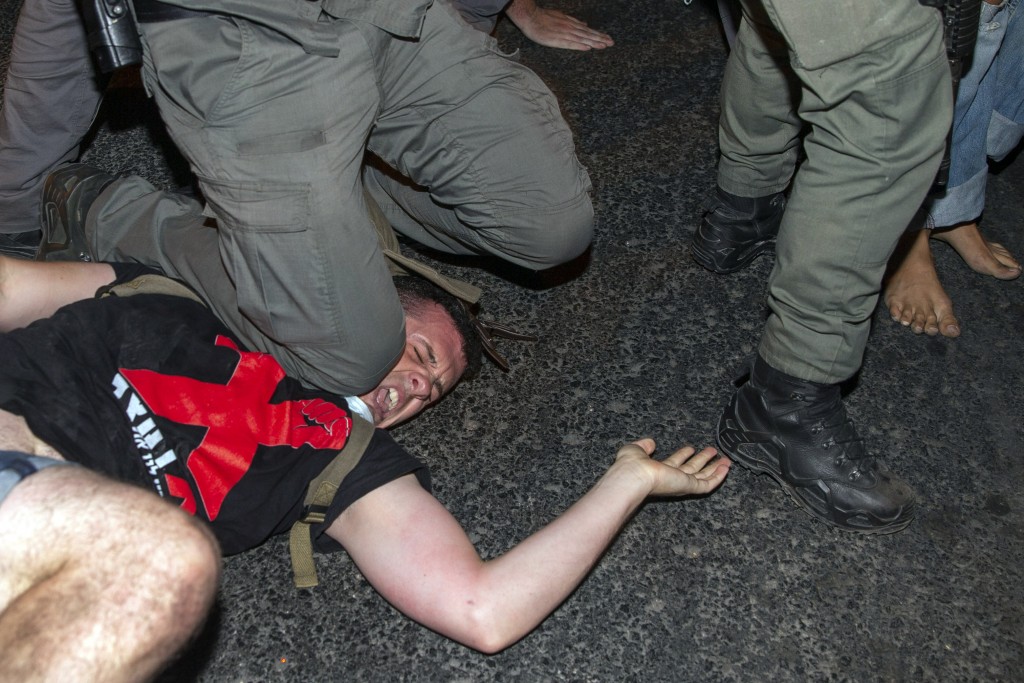 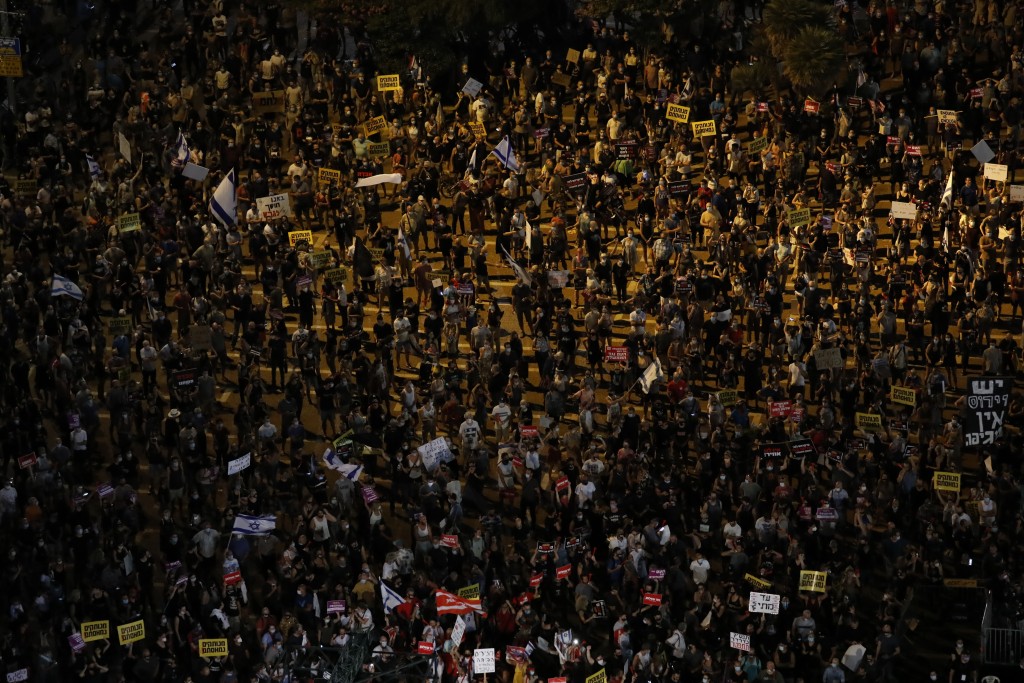 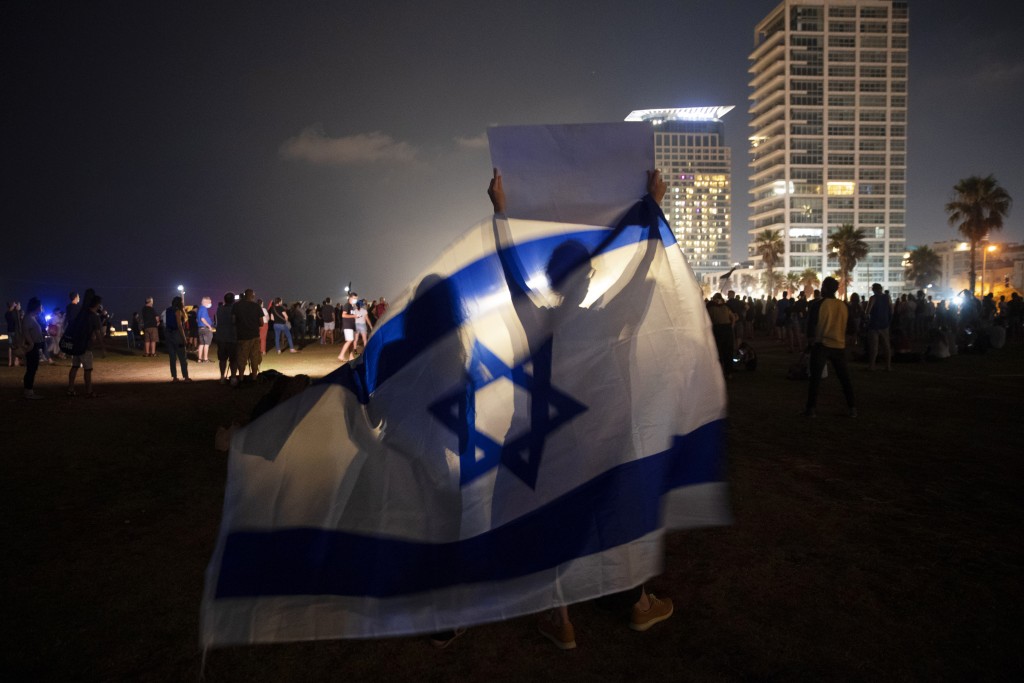 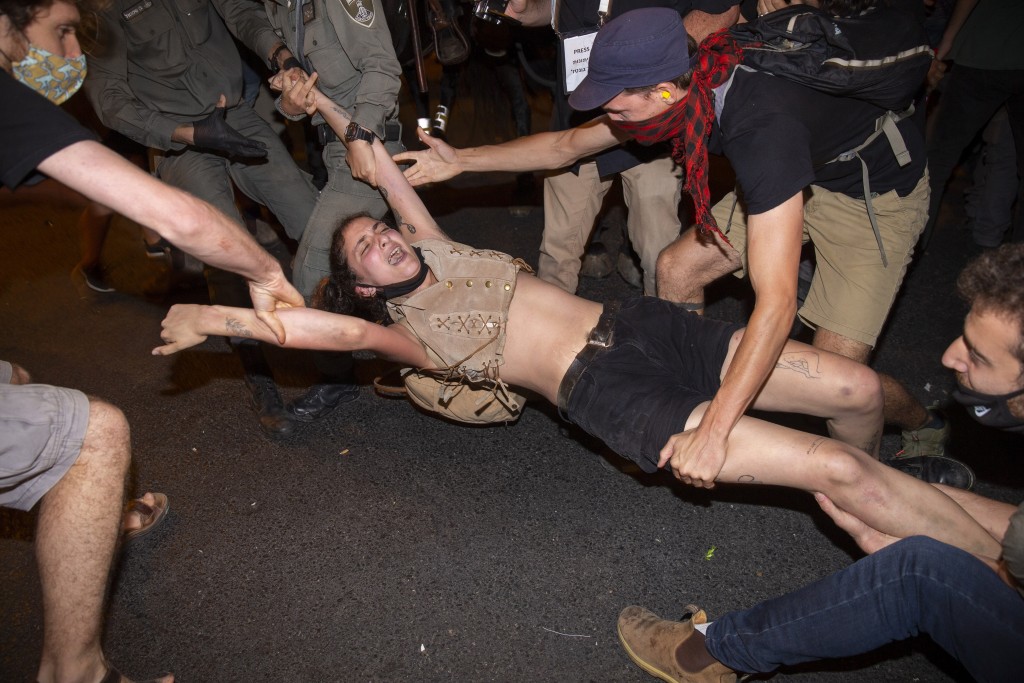 JERUSALEM (AP) — In attending his first-ever public protest, 34-year-old Nimrod Gross arrived with the only prop he felt reflected him — the blue-and-white Israeli flag.

The former combat soldier and current tour guide and after-school science teacher had seen his monthly income plunge to around $500 as a result of the harsh economic fallout from the coronavirus. A centrist who shuns politics, but with siblings who supported Prime Minister Benjamin Netanyahu, he sought a unifying symbol to express his despair.

Instead, Gross and his flag were pummeled by powerful police water cannons. The moment was captured by an Associated Press photographer, quickly becoming an emblematic image of the public outcry generating the wave of demonstrations sweeping the country against Netanyahu and his perceived failure to handle the country’s deepening economic crisis.

Netanyahu, standing trial for corruption, has tried to dismiss the youthful protesters as radicals and anarchists flouting public health restrictions while he marshals the country through a national emergency. But the thousands now taking to the streets several times a week come from all walks of life, and with unemployment surging to record numbers, they are demanding a reckoning from the longtime leader.

“I feel like I grew up on this dream that is blowing up in our faces,” said Gross. “You do everything that society demands of you, and then suddenly you are illegitimate.”

Israel has a long tradition of political protests that draw huge crowds, mostly along ideological lines over how to handle the conflict with the Palestinians. But the protests with the biggest impact tended to transcend the partisan divide, touching on everyday issues afflicting everyone, such as the massive cost-of-living protests in 2011.

In recent years, small weekly protests against Netanyahu were largely the domain of Israel's old guardians of liberal values, angry at what they believe are the prime minister's attempts to chip away at democratic institutions.

But the unprecedented economic downturn and a crisis of confidence in leadership spurred a younger generation of Israelis wary about their future to take a more prominent role.

It’s too early to say if the outpouring will generate the type of “revolution” that some of its activists advocate. But the broad, diverse swath of protesters, and the desperate atmosphere and sudden lack of opportunities for young Israelis, has provided fertile ground.

“Corona is just this magnifying glass that enhances everything that is already wrong with this country. We’ve reached this critical mass where we just have to do something,” said Gross. “We just don’t believe them anymore. They have no shame.”

In 2011, hundreds of thousands of Israelis poured into the streets over the country’s high cost of living, briefly shaking the foundations of Netanyahu’s rule before petering out.

The current wave has seen the largest turnout since then. Energized by a younger, more defiant crowd that's feeling the sting firsthand, organizers hope the movement can maintain momentum, despite health-related restrictions on gatherings and the prospect of another far-reaching lockdown if contagion rates keep rising.

Israel earned praise for its early handling of the virus crisis and imposing tight movement restrictions. But since reopening the economy in May, new cases have spiked to record levels, and unemployment remains over 20%, up from 3.9% before the pandemic.

Netanyahu, who managed to remain in power after three inconclusive elections by convincing his chief rival to join him in an “emergency” government designed specifically to tackle the pandemic, has borne most of the brunt.

He’s come under growing criticism for remaining in office while on trial for corruption, pushing for seemingly anti-democratic measures under the guise of combating the virus and generally mismanaging the ensuing crisis. The size of his bloated government, a minister’s comment dismissing the public’s pain and his own efforts to secure himself a sizable tax break have created a sense that the 70-year-old Netanyahu is detached from the troubles of his angry electorate. His family's perceived hedonism and zest for power have further alienated those who are struggling.

His government has particularly been criticized for providing too little assistance to hundreds of thousands of laid-off Israelis and struggling self-employed workers and business owners. The government has also been accused of issuing confusing and contradictory guidelines that have angered citizens.

Even with the outrage, Netanyahu’s Likud party maintains a sizable lead in opinion polls, and there is little appetite for another election after three grueling campaigns in less than a year. Israel's ceremonial president has publicly rebuked the idea.

Seizing on the sight of a Palestinian flag at one of the protests, Netanyahu has tried to paint the movement as another branch of the left-wing conspiracy he says has permeated the media, law enforcement and the judiciary and is bent on toppling him. But the argument struggled to gain traction.

With most bars and clubs closed, young revelers have taken to drinking and dancing to techno music as they march. A young woman notably climbed atop a mounted candelabra, the national symbol, outside parliament and stripped off her shirt in protest. Others have resorted to similarly provocative — and innovative — forms of protest.

But the feel-good vibe was also quickly replaced with a more violent one, as police deployed a heavy hand in arresting those deemed to disturb public order. Officers have been filmed striking protesters and, in one case, pressing a knee against a demonstrator's throat.

Gross said the climate had only made him more resolute and, although he has no political agenda, he says he hopes the mobilization will awaken Israelis from their despair and lead to change down the road.

“I hope a leader will rise from this protest movement who will be able to unite us,” he said. “I have no problem with it being someone from the right as long as it’s someone responsible and unifying who is not driven by his own interests.”