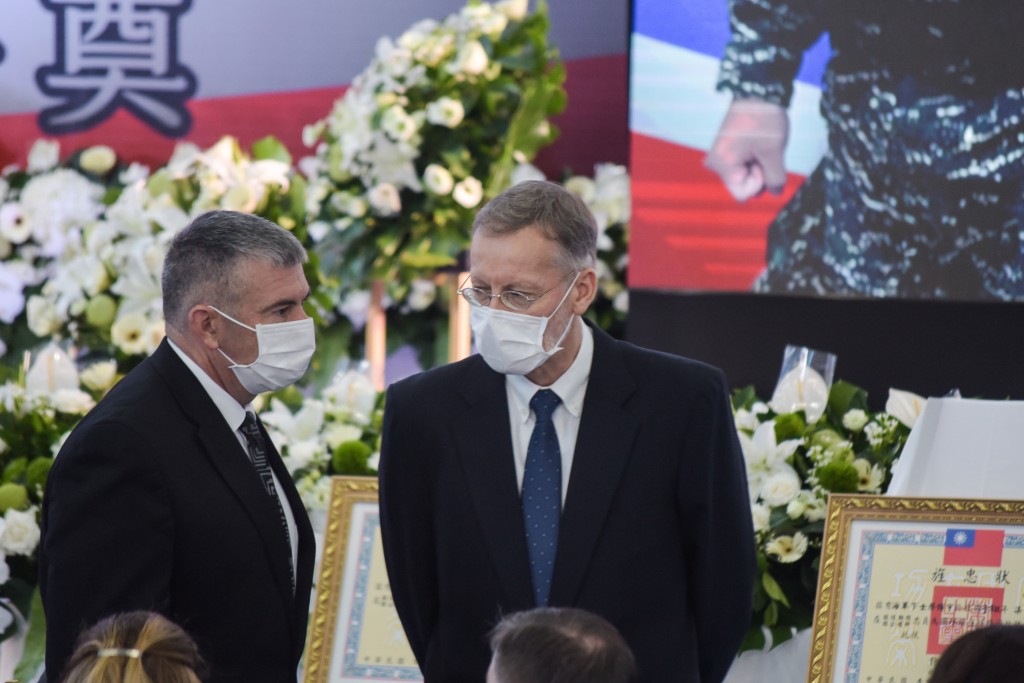 “On behalf of AIT, I express my deepest condolences for the loss of Gunnery Sergeant Chen Chih-jung (陳志榮) and Corporal Tsai Po-yu (蔡博宇),” said Christensen. He said the two had lost their lives to safeguard the vibrant and free society of Taiwan.

“The greatest honor we can bestow on them is to learn from this tragic episode, continue to prepare with rigor and realism, and ensure that these efforts contribute to Taiwan’s readiness to confront future threats,” stated the director. “May these brave men rest eternally knowing that their comrades have assumed their watch to defend Taiwan.”

Wang Ting-yu (王定宇), a legislator from the Democratic Progressive Party, observed that the attendance of an AIT director at a military funeral reflects the increasing cooperation between Taiwan and the U.S. on defense and security, reported the Liberty Times. The gradual normalization of the military partnership between the two countries is on display in the event of an accident, he noted.

However, this is not the first time that Christensen has attended a Taiwanese military funeral as the AIT director. In January, he led a U.S. delegation, which included the Pentagon's Brigadier General Matthew C. Isler, to pay respects to former Chief of the General Staff Shen Yi-ming (沈一鳴) and seven other military officers who were killed in a helicopter crash in northern Taiwan.

The military conducted an anti-landing drill in Kaohsiung on July 3 in the run-up to the annual Han Kuang military live-fire exercises scheduled for July 13-17. Strong waves caused a rubber boat to capsize, with all seven Marines falling into the water and two eventually dying.

A Navy investigation attributed the accident to the volatile waters of the sea. President Tsai conferred a posthumous presidential citation on each of the deceased servicemen during the funeral on Sunday.