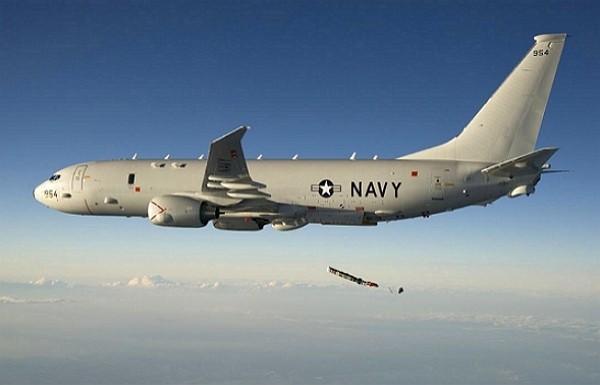 The P-8A then turned around and at one point was only 41.3 nautical miles from China’s territorial sea baseline, which SCS Probing Initiative pointed out may have been the closest to China a U.S. surveillance plane has recently been. Around 2:00 p.m., AE68A2 was tracked returning back to Japan.

Update: P-8A (#AE68A2) kept patrolling alongside #China's east coast, operated about #41NM off the baseline, July 26.
That might be the closest the #US surveillance aircraft has reached recently. https://t.co/wkhZP87wTX pic.twitter.com/ZNI3nm9pkk

Earlier on Sunday, a U.S. Air Force E-8C plane with the hex code AE1492 and a U.S. Navy EP-3E aircraft with the hex code AE1D8A were tracked flying south of Taiwan over the Bashi Channel toward the South China Sea. The EP-3E then flew northwest toward the Chinese coastal province of Fujian, and came within 57.54 nautical miles from China’s baseline at around 2:23 p.m. before turning around and flying back.

Update: EP-3E (#AE1D8A) is flying back, after approaching about 57NM off #Fujian (the province across from #Taiwan) and the southern part of the #TaiwanStrait, July 26. https://t.co/A5socBrUa6 pic.twitter.com/bzqHAbL8wk