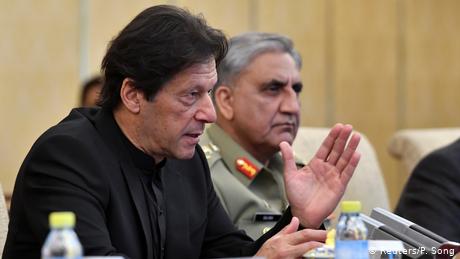 Matiullah Jan, a prominent Pakistani journalist and critic of the Pakistani military, returned home on Tuesday after a brief "abduction" in the capital Islamabad. The country's journalists have heaved a sigh of relief over his return, however concerns about an increasingly shrinking space for critical journalism abound in the Islamic nation.

"I am back home safe and sound. God has been kind to me and my family. I am grateful to friends, national and international journalist community, political parties, social media and rights activists, lawyers bodies, the judiciary for their quick response which made it possible," Jan tweeted on Wednesday.

On Tuesday, Jan disappeared outside a school in Islamabad. Closed-circuit television cameras at the school showed Jan being bundled into a car after being cornered by what appeared to be a police vehicle, an ambulance and an unmarked car.

"There were more than 10 people in five vehicles; some in plainclothes and others in black uniforms. They forcibly put my husband in a vehicle," Kaneez Sughra, Jan's wife, told DW.

"Everyone knows who picked him up. It is no secret about those who have been after him for years," she added.

Jan, 51, was fired from his position as an anchor at Waqt Television in 2018, reportedly under pressure from the military, which he had criticized. He has since maintained a presence on YouTube and other social media platforms.

He had previously been the target of attacks. In 2017, rocks were thrown at the car he was driving near Islamabad.

Jan's apparent abduction was condemned by Pakistani journalists, rights activists and a number of political parties, who dubbed it an attack on media freedom. A campaign on social media demanded his immediate release, with many activists accusing the government's agencies of "kidnapping" him.

It is unclear who picked up Jan. Supporters of Prime Minister Imran Khan's government point out that liberal activists habitually blame the military for "everything wrong in the country." According to these people, Jan staged his own "abduction" to pressure the judiciary, which heard a case about his critical tweets on Wednesday.

Rights groups say the freedom of expression, particularly press freedom, has come under immense pressure in Pakistan since Khan became prime minister in August 2018. The military has further consolidated its power during Khan's government, activists claim.

The government and the military deny these accusations, with PM Khan stating that media is absolutely free in Pakistan.

Jan's brief "abduction" has put the government under increased scrutiny, with the New York-based Committee to Protect Journalists (CPJ) urging Pakistani authorities to "conduct a thorough and transparent investigation into the disappearance of journalist Matiullah Jan and ensure his safety."

In a statement on Tuesday, the Human Rights Commission of Pakistan, an independent NGO, expressed deep concern over "increasing attempts to control the media, suppress independent voices, and curb political dissent, thereby creating an environment of constant fear."

The Islamabad High Court also called for an inquiry into Jan's disappearance.

"The state is responsible for whatever happened today [Tuesday]," said Justice Athar Minallah, chief justice of the Islamabad High Court. "This is a test case for police and the federal government," he added.

A lack of accountability

Adnan Rehmat, an Islamabad-based activist and journalist, told DW that a culture of impunity has taken hold in Pakistan since Khan came to power. "Jan's independent views are considered a threat in this environment."

"His abduction is proof that independent voices are being silenced in Pakistan. Never before has media faced a bigger threat in the country," Rehmat underlined.

Michael Kugelman, a South Asia expert at the Washington-based Woodrow Wilson Center for Scholars, says the "apparent abduction is troubling but sadly unsurprising given the intensifying crackdowns on dissent in Pakistan and given Jan's reputation as a strong critic of the state and especially the military."

"While his quick release is welcome news, there is a need to investigate what happened – and yet I wouldn't count on it. And that's a big part of the problem – a lack of accountability for those complicit in attacks on the free press."