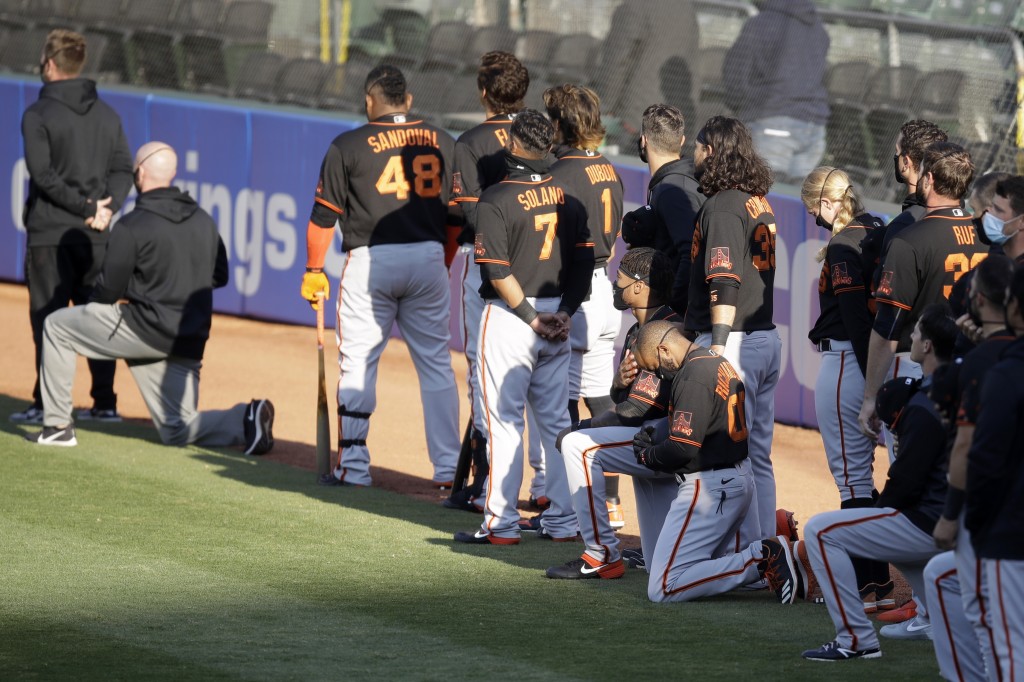 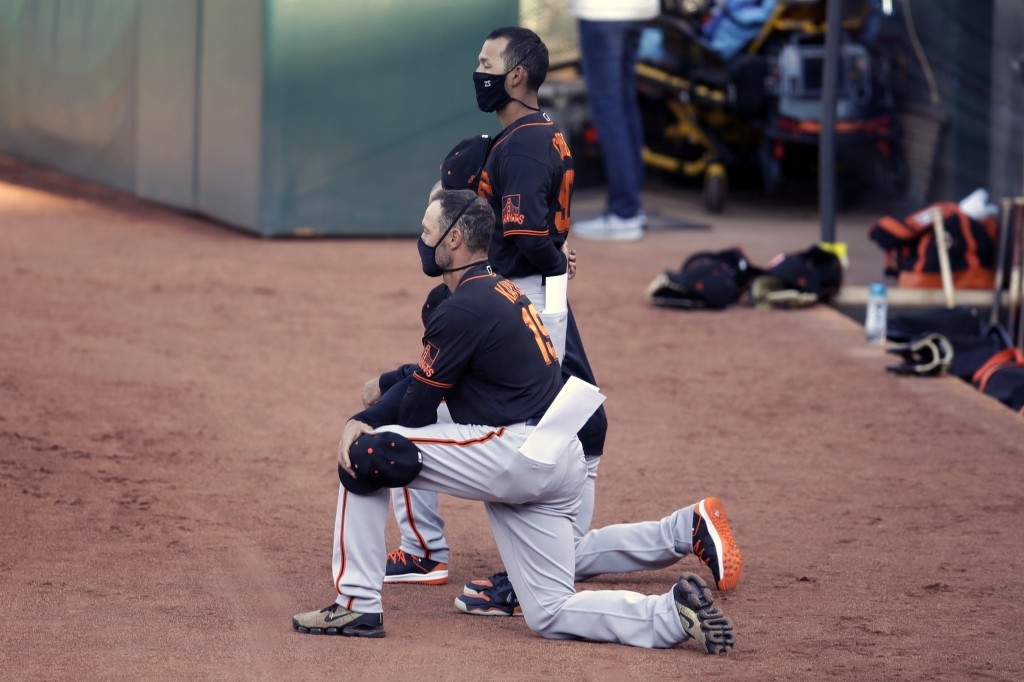 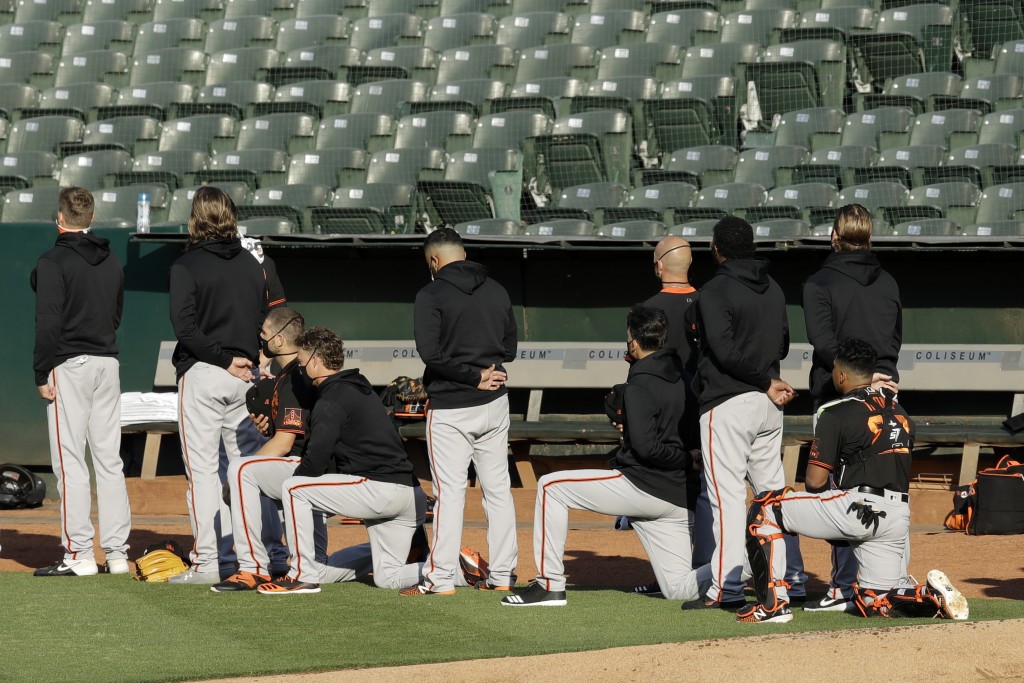 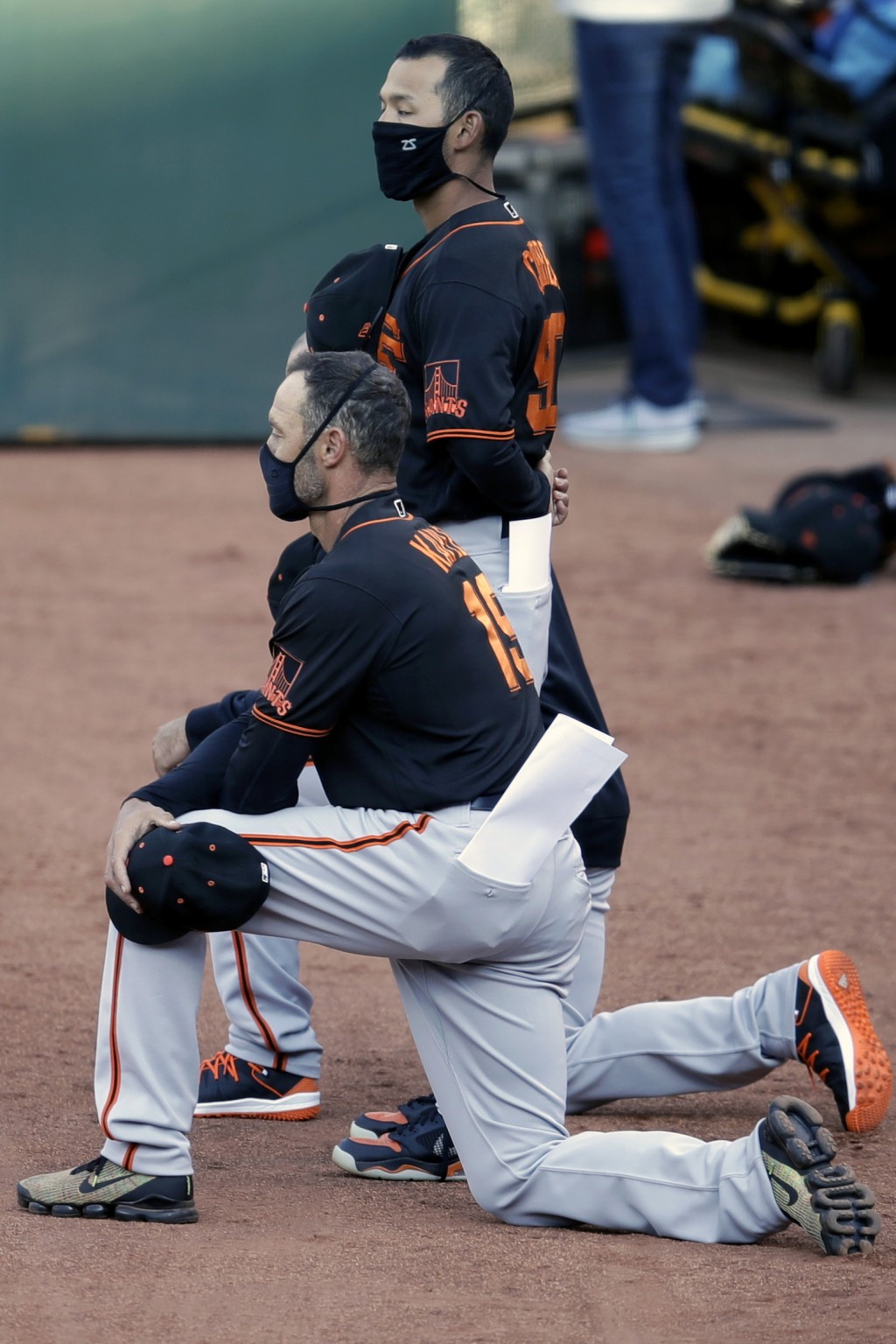 SAN FRANCISCO (AP) — Jaylin Davis called home and spoke with his family then his decision immediately became clear: he would kneel for the national anthem.

If there even was an anthem. The Giants were playing an exhibition game at Oakland on Monday night with no fans after a months-long delay caused by the coronavirus pandemic.

It turned out Davis had all kinds of support on every side of him, including from first-year San Francisco manager Gabe Kapler, who also took a knee before the Giants' 6-2 victory.

Fellow outfielders Mike Yastrzemski and Austin Slater chose to kneel. So did first base coach Antoan Richardson, while shortstop Brandon Crawford stood between Davis and Richardson with a hand on each man's shoulder.

"For them to be courageous enough to do it it really meant a lot,” Davis said Tuesday. “... We kind of talked at the beginning before we even started camp that we wanted to make known that we weren't going to let everything be pushed aside just because baseball was back.”

Kapler and Davis had been in regular communication about racial and social issues and the manager called Davis earlier Monday to inquire about what Davis might do.

After the game, Kapler said the Giants would continue to have important discussions about their role in driving change and making an impact when it comes to racism and injustice.

The 26-year-old Davis, who is Black, said it was a difficult decision to kneel given he is a rookie. Then Yastrzemski and Hunter Pence pulled him aside and assured the right fielder they would support him regardless.

Davis said he has more ideas to shed light on the issues that matter to him.

“They told me not to worry about being a first-year guy or anything, if I felt comfortable doing it then I should do it,” Davis said. “Having Gabe and all of them do it, too, that kind of helped me be more comfortable about it. I think it's been big. I've gotten texts from guys that I played with with the Twins, old coaches, that I've had. They just told me that they would support me and they're behind me.”

President Donald Trump took notice and posted on Twitter: “Looking forward to live sports, but any time I witness a player kneeling during the National Anthem, a sign of great disrespect for our Country and our Flag, the game is over for me!”

Former San Francisco 49ers quarterback Colin Kaepernick started taking a knee during the national anthem in 2016 to protest racial inequality and police mistreatment of minorities. He was roundly criticized for years, but public sentiment has changed since George Floyd’s death in May.

Floyd, a Black man, died after a white Minneapolis police officer pressed his knee into Floyd’s neck while Floyd was handcuffed and saying that he couldn’t breathe.

Kapler has been outspoken on issues such as police brutality. He talked to the team Monday before taking a knee.

“I wanted to demonstrate my dissatisfaction with our clear systemic racism in our country and I wanted them to know that they got to make their own decisions and we would respect and support those decisions," Kapler said. "I wanted them to feel safe in speaking up.”