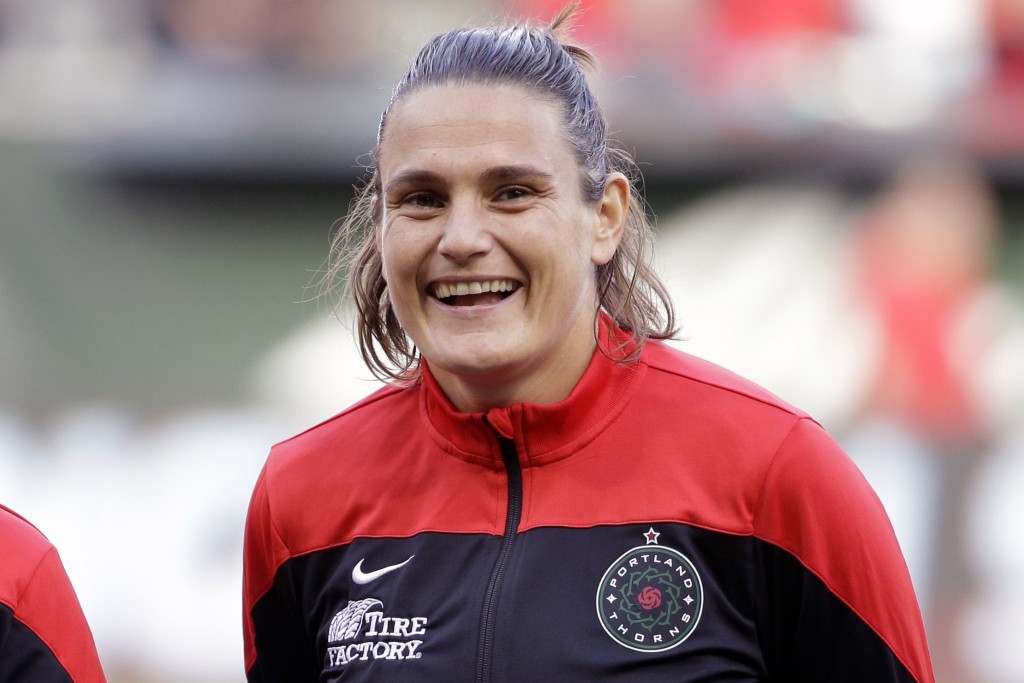 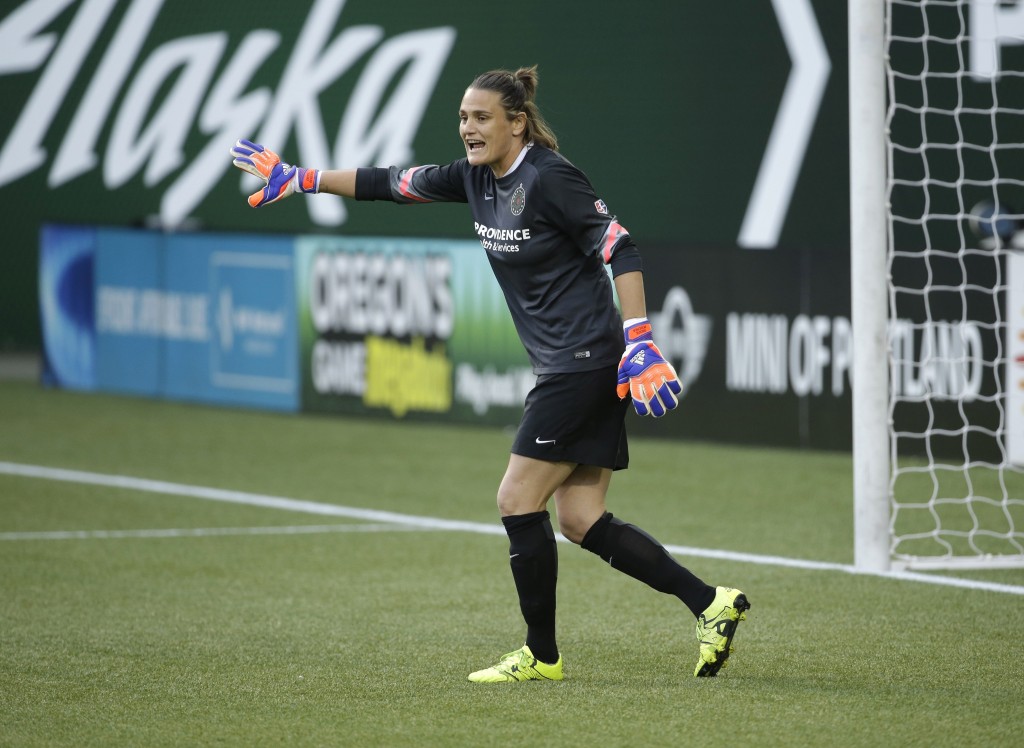 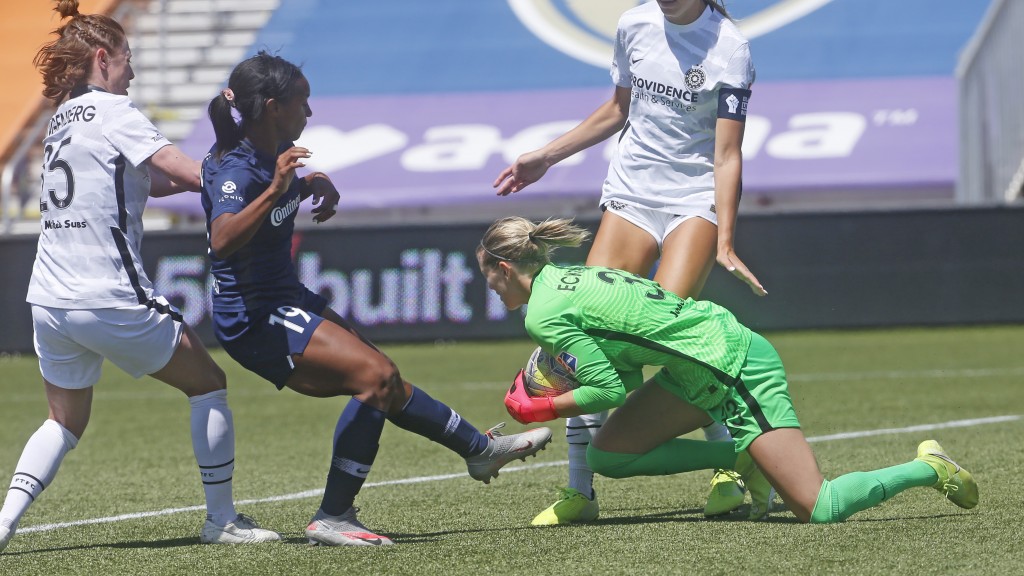 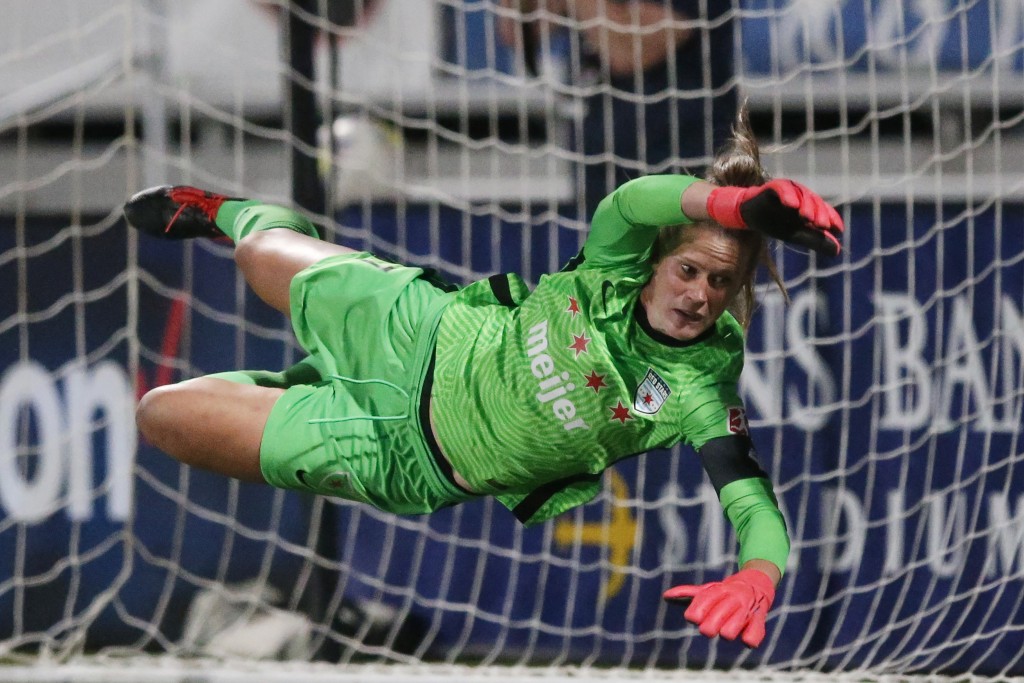 Former German national team goalkeeper Nadine Angerer has unexpectedly found herself on the bench for the Portland Thorns, poised to play if needed as the team navigates the Challenge Cup tournament.

The Thorns' 41-year-old goalkeeping coach retired from playing five years ago but has been pressed back into duty as a backup because of injuries at the position.

“Let’s just say I do what’s needed to help the team. I don’t know if I’m going to be a big help, but I think I’m still better than a few players,” she said, laughing.

The Thorns are set to play the Houston Dash on Wednesday in the semifinals of the National Women's Soccer League tournament. Sky Blue plays the Chicago Red Stars in the other semi at Rio Tinto Stadium in Utah.

Portland made it to the semifinals by upsetting the two-time defending league champion North Carolina Courage. Morgan Weaver scored the game's lone goal and Britt Eckerstrom made eight saves to preserve the win.

Eckerstrom took over when goalkeeper Bella Bixby injured her ACL and was sent back to Portland for treatment. Bixby had started for the Thorns in the tournament's group stage because the regular starter, Adrianna Franch, was nursing a knee injury.

Angerer said it says a lot about Eckerstrom's character that she was able to play as well as she did against the Courage.

“She never stopped training, she never had an attitude or was in a bad mood because she wasn’t playing. She trained even more,” Angerer said. “I told her, 'Your chance may be coming. You never know.' And she was very well prepared for it."

But with Eckerstrom starting and no other goalkeepers available, Angerer found herself in an unusual position, signed to a player contract as the backup and listed as a sub on the team's game roster.

Because the teams are living in a bubble for the duration of the tournament, Portland didn't have an option to bring anyone else in.

Before becoming the team's goalkeepers coach, Angerer played in Portland for the final two years of her professional career and fell in love with the city. The fans embraced her, too.

She is something of a legend among goalkeepers as the only one to win FIFA world player of the year honors. She was in net for the German national team from 2007 to 2015, retiring from the international game following the World Cup in Canada.

Angerer did not concede a single goal during the 2007 World Cup, setting a tournament record at the time for most minutes played (540) without being scored on. One of her most memorable moments came during the final against Brazil when she stopped a penalty kick from five-time FIFA Player of the Year Marta and Germany won 2-0.

She was named to the Thorns' coaching staff in 2016. Angerer said she's incredibly lucky to have such a talented group of keepers. Under Angerer, Franch was twice named NWSL goalkeeper of the year.

“I mean, it’s a dream to work with them. Seriously, I mean it. These three, first of all, they’re good human beings. On top of this, they have very, very outstanding skills. They’re really good goalkeepers," Angerer said. “It’s makes it very easy for me because we all support each other and they support each other very well in training.”

With no wins in the group stage, Portland was the No. 8 seed in the quarterfinals out of the eight teams that have played in the tournament. The league's ninth team, the Orlando Pride, was forced to withdraw before the event because of positive COVID-19 tests.

The Dash advanced to the semifinals on penalties after a scoreless draw with the tournament's home team, the Utah Royals. Afterward, goalkeeper Jane Campbell was already looking ahead to the Thorns.

“I think moving forward, we got a new group, a new style, a new energy and Portland hasn’t seen that yet. I’m sure they’ve seen us play, but they haven’t played against us. So I think we’re really excited to play a team who is probably gunning for a championship now that they’ve knocked off North Carolina," Campbell said. “They’re going to bring a lot of energy, as well. I think we’re just going to be ready.”

Sky Blue and the Chicago Red Stars also advanced on penalties after scoreless draws, leading to speculation that a compact schedule and limited full-team training leading up to the tournament may have taken a toll on offense.

Red Stars goalkeeper Alyssa Naeher, who was in goal for the U.S. team that won the World Cup last year, pointed to parity for the fact that the top three seeds, the Courage, the Spirit and the Reign, were eliminated.

“I mean, honestly, with the NWSL the seedings don’t really mean anything. Everybody’s competitive. Everybody’s a challenge in a different way,” Naeher said. “So, one through eight in the tournament is just a number in front of a team.”