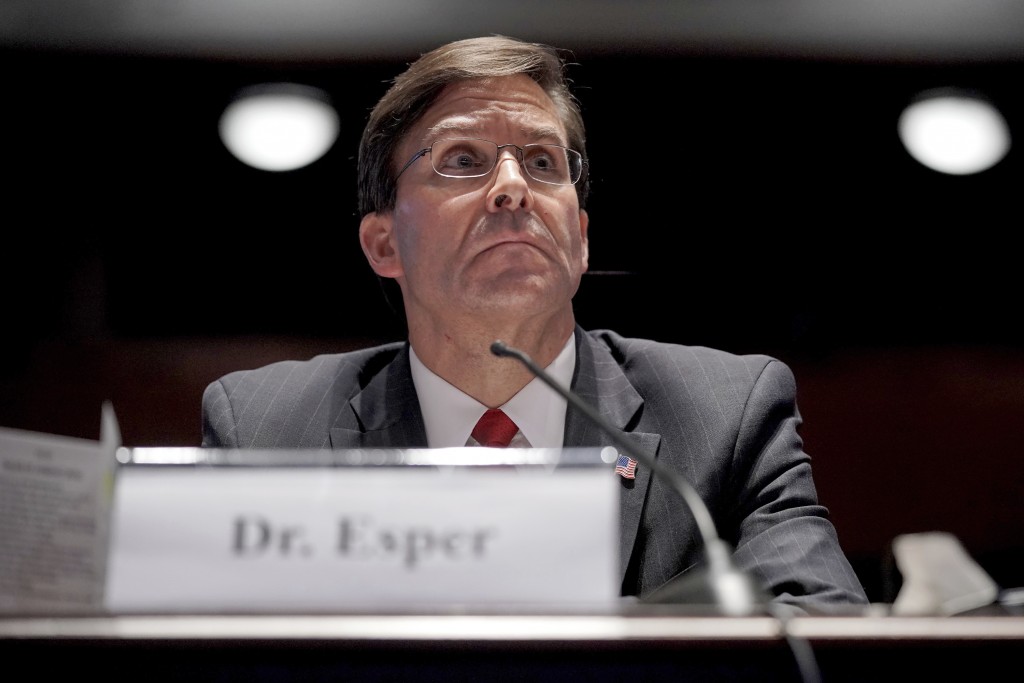 WASHINGTON (AP) — The Pentagon is considering “adjustments” to its military presence in South Korea and around the globe as it shifts from years of countering insurgencies and militants in the greater Middle East to focusing on China, Defense Secretary Mark Esper said Tuesday.

Esper said he has issued no order to withdraw from South Korea.

Without discussing specifics, Esper said he favors more emphasis on rotational deployments, as opposed to permanent stationing, of American troops “because it gives us, the United States, greater strategic flexibility in terms of responding to challenges around the globe.”

The U.S. has about 28,500 troops stationed in South Korea as a bulwark against North Korea, but the U.S.-South Korea treaty alliance is under great strain, mainly because of the Trump administration's demand that Seoul vastly increase the amount it pays for the U.S. presence. Negotiations led on the U.S. side by the State Department have been deadlocked for months.

The Pentagon said Esper spoke by phone Monday with his South Korean counterpart to discuss the payment issue and other matters, including the stalemated U.S. effort to rid North Korea of its nuclear weapons. It gave no details.

President Donald Trump has questioned the value of stationing U.S. troops in South Korea and elsewhere in the world, saying Seoul and other host governments must pay more of the cost.

In his remarks in a webinar hosted by the International Institute for Strategic Studies in London, Esper said that since taking office a year ago he has sought to review the global U.S. military footprint with an eye to competing more effectively with China and Russia. That has included looking for ways to bring more U.S. troops home so that they can train more directly for missions related to potential conflict in the Asia-Pacific region.

Esper said he hopes to visit China this year to “enhance cooperation on areas of common interest,” improve crisis communications systems, and “reinforce our intentions to openly compete in the international system in which we all belong.”

Earlier this month Esper approved the withdrawal of 9,500 troops from Germany, although he has yet to publicly disclose how many of those will be brought home and how many will be shifted to other parts of Europe or elsewhere. He also has reviewed the U.S. presence in Africa.

“We will continue to look at adjustments in every command we have, in every theater, to make sure we are optimizing our forces," Esper said in Tuesday's webinar.

The U.S. military presence in South Korea dates to the 1950-53 Korean War in which American forces fought in support of the South after North Korean troops invaded and were later supported by Chinese troops.