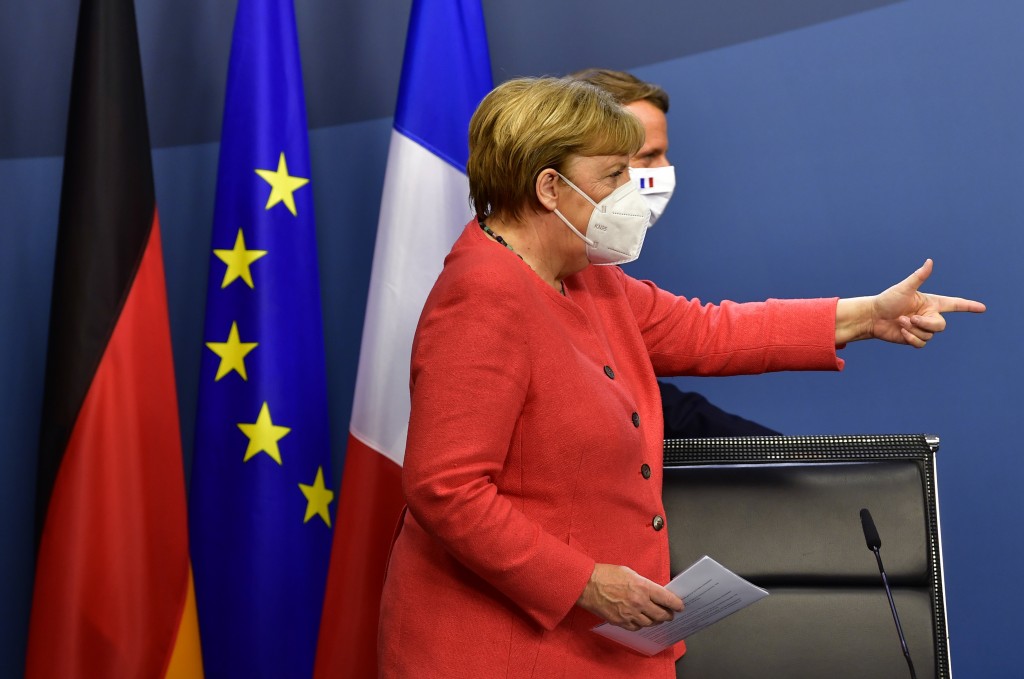 FRANKFURT, Germany (AP) — European leaders took a historic step towards sharing financial burdens among the EU's 27 countries by agreeing to borrow and spend together to pull the economy out of the deep recession caused by the virus outbreak.

Pushed by Germany's Angela Merkel and France's Emmanuel Macron, leaders agreed to borrow together by selling bonds, using the European Union's collective strong credit rating to borrow at low interest costs. The money will fill a 750 billion-euro ($855 billion) recovery fund that will boost the hoped for economic rebound next year and restore growth and jobs lost in this year's plunge.

Two decisions - shared borrowing, and simply handing out much of the money as grants - broke longstanding resistance from some of the financially stronger countries to exposing their finances and taxpayers to troubles in southern Europe where bureaucracy and red tape continue to slow growth. Germany, which had long resisted shared borrowing, played a decisive role by changing its approach in the face of the crisis as Merkel pressed for a deal.

“With the biggest-ever effort of cross-border solidarity, the EU is sending a strong signal of internal cohesion,” said Holger Schmieding, chief economist at Berenberg bank. “Near-term, the confidence effect can matter even more than the money itself.”

The EU's executive commission predicts the bloc's economy will shrink by 8.7% this year and rebound by 6.1% next year. The goal of the spending is to support that upswing.

By turning to shared debt and spending, the EU is taking a different approach to solidarity than it did during the debt crisis that pushed Greece and four other members of the 19-country euro currency union into international bailouts in 2010-2015. Greece was rescued with loans that have to be repaid, increasing its debt load. That help came with tough conditions to rein in government spending that reduced growth, spread hardship and fueled resentment.

The four-day meeting nevertheless put the bloc's deep-seated fault lines on display. To overcome resistance from five European countries led by the Netherlands, they trimmed the amounts to be dispensed as grants and increased the amount offered as loans that have to be paid back. The money will not kick in until next year and the fund is a one-off, meaning that while it sets an important precedent it does not necessarily lead to ongoing mutual support that could be counted on in any future crisis.

The grant provision is important because it will enable countries like Italy and Spain to spend more on their economies without adding to their national debt piles. Both were hard hit by the virus outbreak and Italy in particular has a large debt burden that must be regularly rolled over with new borrowing. A huge spike in debt could deter bond markets from lending at affordable rates.

Resistance from the Netherlands, Austria, Sweden, Finland and Denmark reflects skepticism about the pace of economic reform in the countries that need help.

Yet the trillions in financial support are starting to add up. Although the European response is spread across EU institutions, the European Central Bank, and the individual nations governments, economists say the stimulus figure is weighty enough to impress international investors so they will keep lending to indebted countries such as Italy and avoid another debt crisis.

The 750 billion euro recovery fund comes on top of a 1.1 trillion euro EU budget that pays for the union's agricultural support, projects to help poorer members catch up and myriad other programs. That, in turn, follows up to 540 billion euros in aid for wage support programs to hold down unemployment, and credit lines that hard-hit countries could tap from the eurozone's bailout fund. Another 1.35 trillion euros is being printed by the European Central Bank and injected into the economy through a series of bond purchases that hold down market borrowing costs for businesses, governments and consumers. It's those bond purchases that have kept the virus crisis from turning into a financial crisis while EU leaders debated.

Grants based on common borrowing “is an enormous step towards solidarity in Europe,” wrote economists Bert Colijn and Carsten Brzeski at ING bank. “From a positive perspective, the fact that government leaders negotiated to the bitter end to find a deal and did not simply decide to postpone the decision shows that all of them saw the sense of urgency,” they said in a research note.

"From a more negative perspective, the hard-fought compromise will have smashed some political porcelain and has not always sent a signal of strong unity. Only time will tell which of these two perspectives will become the dominant narrative in financial markets.