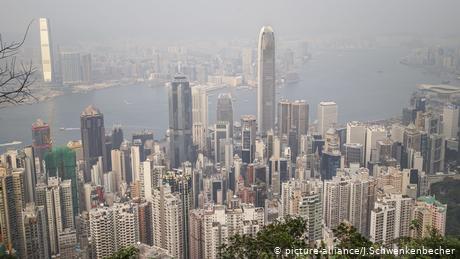 China on Tuesday warned the UK of "consequences" a day after the British government suspended its extradition treaty with Hong Kong, in response to Beijing's controversial new security law in the city.

The Chinese Embassy in the UK issued a statement on its website where it criticized the move and said it would respond resolutely to what it called interference in its internal affairs. "The UK side has gone even further down the wrong road," the statement read.

"China urges the UK side to immediately stop interfering in Hong Kong affairs which are China's internal affairs," it said. "The UK will bear the consequences if it insists on going down the wrong road."

The UK became the fourth nation, after Canada, Australia and the United States, to revoke its extradition agreement with the semi-autonomous city.

British Foreign Secretary Dominic Raab called the decision a "reasonable and proportionate response" to "a clear and serious violation" of the UK-China joint declaration, referring to the national security law.

Read more: Opinion — China is looking to challenge the US

Under the joint declaration, Hong Kong returned from British to Chinese rule in 1997 on the condition that it preserves the city's semi-autonomous status. "The imposition of this new national security legislation has changed key assumptions underpinning our extradition treaty arrangements with Hong Kong," Raab said.

China passed a national security law in Hong Kong last month that criminalized subversion, succession efforts and foreign interference. The measure followed more than a year of pro-democracy and anti-China protests in the city.

London's move has put further strain on the already fraught Sino-British relations. Britain had previously outraged China by offering residents of Hong Kong a pathway to UK citizenship, in response to the security law.

Last week, the UK vowed to remove all Huawei 5G equipment from its networks. The US has lobbied its allies to shun the Chinese telecom company, saying Beijing could use it to spy on Western nations. Huawei has denied the allegations.

Prime Minister Boris Johnson had said earlier that Britain wanted to take a tough line on certain issues, but maintain a balance.

"I'm not going to be pushed into a position of becoming a knee-jerk Sinophobe on every issue, somebody who is automatically anti-China," Johnson said. "You have got to have a calibrated response and we are going to be tough on some things but also going to continue to engage."