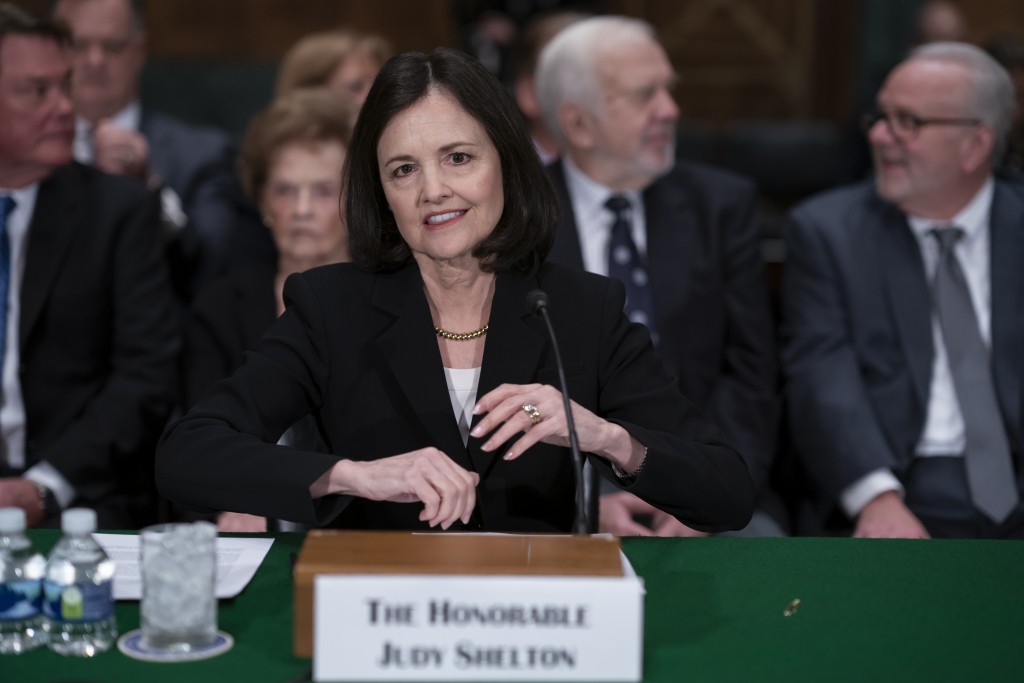 WASHINGTON (AP) — In a shift, the Senate Banking Committee is likely to back President Donald Trump's unconventional nomination of Judy Shelton for the Federal Reserve's Board of Governors in a party-line vote Tuesday.

The committee's support would move Shelton's nomination to the full Senate, which would have until the end of the year to confirm or reject it.

Late Monday, Sen. John Kennedy, Republican of Louisiana, said he would support Shelton's nomination, essentially guaranteeing that she would win the votes of all 13 GOP senators on the committee. The Democrats have 12 members on the panel. Kennedy had previously said he was undecided.

Shelton's unorthodox views and questionable credentials have drawn widespread opposition among economists and many former Fed officials. She has previously voiced support for linking the U.S. dollar's value to gold, has expressed skepticism about the Fed's political independence, and has supported lower interest rates since Trump's election after having criticized them under President Barack Obama.

Most mainstream economists regard any return to a gold standard as reckless, arguing that it would cause more and deeper recessions by limiting the Fed's ability to cut interest rates to fight downturns. At a hearing in February, Shelton retreated from her previous stance and said she “would not advocate going back to a prior historical monetary arrangement.”

Still, her nomination appeared to stall at that hearing after three Republican senators said they were skeptical enough about her suitability for the Fed to either oppose her nomination or declare themselves undecided.

One of them, Sen. Richard Shelby of Alabama, said he was bothered by “some of your writings.” Another, Sen. Pat Toomey of Pennsylvania, criticized her view that the Fed should cheapen the dollar if other nations appeared to be manipulating their own currencies. After the hearing, Kennedy expressed skepticism about her nomination.

Kennedy had grilled Shelton on how she would respond to a recession if she were able to unilaterally set Fed policy. Shelton replied that she would cut the central bank's benchmark short-term interest rate to zero and start buying $80 billion a month in Treasury bond purchases — policies that she had denounced when the Fed pursued them after the Great Recession.

But Shelton's prospects eventually brightened. Toomey said he would support Shelton after she had reassured him that she would not seek to lower the value of the dollar. Shelby said that if all other Republicans supported her nomination, he wouldn’t block it.

As a member of the Fed's powerful board of governors, Shelton would vote on the Fed's rate decisions and on banking regulation. The governors also vote on whether to institute emergency measures, such as the Fed's decision in March to start buying corporate bonds for the first time.

Many of Shelton's critics fear that if she is confirmed as a central bank governor and Trump is re-elected, the president could tap her to succeed Jerome Powell as chair when Powell's chairmanship ends in 2022.

David Wilcox, a senior fellow at the Peterson Institute for International Economics and a former director of research and statistics at the Fed, noted that even as a lone governor, Shelton could potentially slow the Fed's decision-making.

“Time and energy would be consumed batting away ... proposals that were consigned to the dustbin of history decades ago," Wilcox said.

Some analysts say that the perception that Trump appears less likely to win re-election may boost Shelton's prospects because it makes it less likely that he could elevate her to the Fed's chairmanship. The full Senate could even wait until after the election is over to vote on her nomination.

Since Shelton's hearing in February, the coronavirus pandemic has plunged the U.S. economy into its worst downturn since the Depression. Democrats on the Banking Committee have asked the panel's chairman, Michael Crapo, an Idaho Republican, for a second hearing given the drastic deterioration in the economy since the February session.

Shelton served as an economic adviser to Trump’s transition team and then as U.S. executive director for the European Bank for Reconstruction and Development, which helps former communist countries transition to market economies. She holds a Ph.D. in business administration from the University of Utah.

In addition to Shelton, Trump has nominated Christopher Waller, research director at the St. Louis Federal Reserve Bank, for a second vacancy on the seven-member Fed board. Waller, who drew much less attention at the same February hearing where Shelton appeared, is seen as a far more conventional and qualified choice for the Fed. Some of his research examines the benefits of the central bank’s independence from political interference.

Waller has attended the Federal Reserve's policy meetings for several years as a staffer. Before joining the St. Louis Fed, he worked as an academic, researching monetary policy, for 25 years.